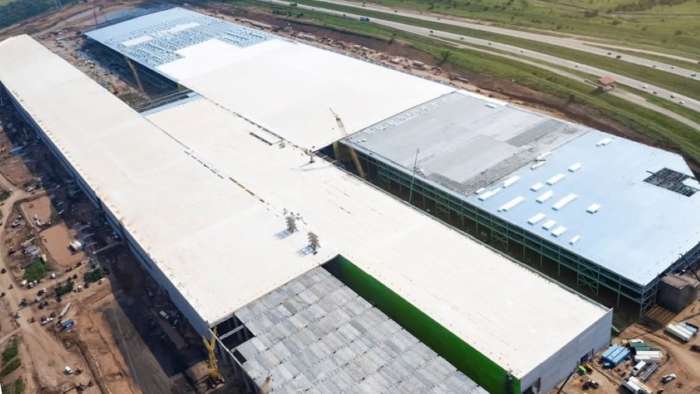 An inside source familiar with Tesla’s Giga Texas and Giga Berlin construction timelines says - Tesla is planning to start test production of a drivable refreshed Model Y in Giga Texas as early as next week.
Advertisement

An inside source familiar with Tesla’s Giga Texas and Giga Berlin construction timelines says - Tesla is planning to start test production of a drivable refreshed Model Y in Giga Texas as early as next week.

However, previous reports from credible sources have suggested Giga Texas’ construction has moved so far ahead of Giga Berlin that Tesla is considering building the 4680 battery pack in Giga Texas, and shipping it to Giga Berlin.

According to the reports, this arrangement will last until Giga Berlin’s battery plant which is currently under construction becomes operational.

And now a report from Joe Tegtmeyer, from the namesake YouTube channel gives us more evidence of Giga Texas’ rapid progress.

If you happen to be unfamiliar, Joe Tegtmeyer flies a drone over the Giga Texas mile-long factory and documents the plant’s progress several times a week.

Joe says recently he was able to talk to a trusted Tesla source who works on the ground at Giga Texas and who is also familiar with Giga Texas’s and Giga Berlin’s production timeline.

Joe says this source has given him information regarding Tesla’s Giga Texas production roadmap.

According to the source, Tesla is planning to build the first fully produced test Model Y next week at Giga Texas. The vehicle when it starts production will be fully operational but not street legal.

This means the vehicle will have all production parts including the front and rear casting, stamping, welding, painting, drivetrains, batteries, and interior.

However, Tesla does not plan to deliver this vehicle to customers but rather will be using it for tests and to train employees who will work on the production line.

The source says Tesla plans to begin customer deliverable refreshed Model Y production in early October which is only two months away.

Related news: The Model Y Is Quickly Becoming Tesla's Premier Vehicle And The New Design Will Raise Its Stock Even More

The source was also able to confirm Giga Texas is about a month or so ahead of Giga Berlin’s Schedule.

You can watch Joe’s entire video detailing Model Y’s production timeline and his latest flyover of Giga Texas below.

The refreshed Model Y is expected to come with all of Tesla’s breakthrough next-generation technologies. These include the 4680 batteries, a structural battery pack, and likely a new wiring system that will decrease the total length of wires in the vehicle from 700 meters to 100 meters.

All these changes are expected to improve the Model Y’s already amazing features, performance, handling, and range. In a previous article based on Elon Musk’s words, we have a reason to believe the refreshed Model Y which will be produced in Giga Berlin and Giga Texas will have 474 miles range.

This is definitely Tesla’s long-term goal, however, according to Musk if Tesla hasn’t ironed out 4680 battery mass-production by the time the Giga Texas and Giga Berlin Model Ys begin production, the EV maker will employ a staggered rollout of the new technologies throughout its product line.

Speaking at the company’s recent earnings call Musk said, “We’re also aiming to do a structural pack with 4680 cells, which is a mass reduction and a cost reduction, but we’re not counting on that as the only way to make things work.”

Musk added “we have some backup plan with a non-structural pack and 2170s essentially. But at a scale production, we obviously want to be using 4680s and structural pack. From a physics standpoint, this is the best architecture, and from an economic standpoint, it is the lowest-cost way to go, so the lightest, lowest cost.”

Hopefully, Tesla will improve the 4680 battery mass production in the next 2 months in time for the Giga Texas Model Y. We will keep you posted if we hear more information regarding Tesla’s progress. Make sure to visit our site torquenews.com/Tesla regularly for the latest updates.

So what do you think? Excited about the refreshed Model Y? Also will the new Model Y being so close to production make you hold off on your purchase? Let me know your thoughts down in the comments below.

For more information check out: The Model Y Is Quickly Becoming Tesla's Premier Vehicle And The New Design Will Raise Its Stock Even More Also, see Tesla's Hidden Revenue Sources

tangible wrote on August 5, 2021 - 7:02pm Permalink
no 4680 batteries will be available soon. Only demonstrators, low rate production. Even if the publicly discussed engineering challenges were solved today, machinery and raw materials for production wouldn't be in place soon. Any production from GigaTX will be using 2170 paks, maybe structural, maybe not. I would guess a structural pak could be made using 2170 cells, but no one has mentioned testing of such (crash, NHTSA rating for the variances, etc).