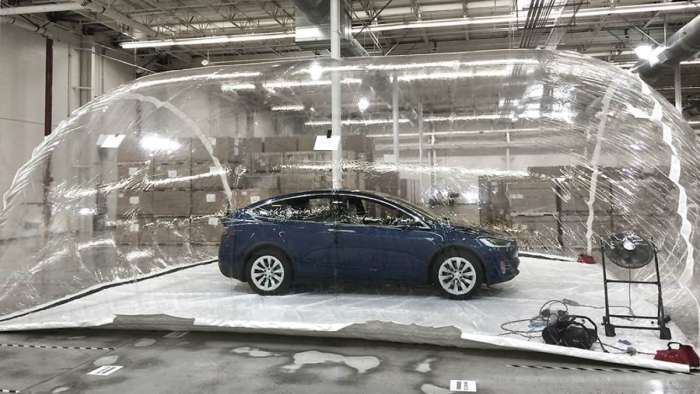 US Made Tesla Model Ys Get Bioweapon Defense Mode

The HEPA air filtration system developed by Tesla is so good, the air quality in the cabin of the vehicles matches the cleanliness levels of hospital operating rooms and special purpose-built clean rooms.

Elon Musk in the past has even gone so far as to claim the cabin of a Tesla with Bioweapon Defense Mode activated is so clean a surgery can theoretically be performed in the vehicle.

When announcing the feature back in 2016, Tesla said the air filtration system was put to the test in real-world environments from California freeways during rush hour, to smelly marshes, landfills, and cow pastures in the central valley of California, to major cities in China.

Tesla even conducted an experiment where a Model X was placed in a large bubble contaminated with extreme levels of pollution (1,000 µg/m3 of PM2.5 vs. the EPA's "good" air quality index limit of 12 µg/m3).

Tesla engineers then closed the falcon doors and activated Bioweapon Defense Mode. In less than two minutes, the HEPA filtration system had scrubbed the air in Model X, bringing pollution levels from an extremely dangerous 1,000 µg/m3 to levels so low as to be practically undetectable.

And as all of us are starting to be more aware of the health risks pollution is putting on our lives, Tesla's Bioweapon Defense Mode has undoubtedly become a must-have feature for anyone looking to purchase a Tesla.

However, Bioweapon Defense Mode has only been available on the higher-end Model S and X vehicles, with made in China Model Y receiving the feature later on.

But now, according to The Kilowatts, US-made Model Ys have also started to get this feature. On The Kilowatts Twitter page, they shared a picture of a Model Y which appeared to be a July 2021 build with this feature.

BREAKING: New Tesla Model Ys are being built with Bioweapon Defense Mode!
This feature uses HEPA filters to provide hospital grade air quality.
It’s been standard in Model S/X for a while now but this is the first time we’re seeing it in a Model Y! @elonmusk pic.twitter.com/ZNWgo6fjje

According to The Kilowatts, this feature does not seem to be available on Model 3s yet. And from experience and considering the complexity and necessity to add physical hardware, it’s highly unlikely vehicles delivered without Bioweapon Defense Mode will get this feature as a retrofit.

We will keep you posted if Tesla releases more information regarding the addition of Bioweapon Defense Mode to the Model Y and if there is a possibility the feature can be added as a retrofit.

So what do you think? Are you considering trading in your current vehicle to get the Bioweapon Defense Mode Model Y? How much does the feature matter to you? Let me know your thoughts down in the comments below.

DeanMcManis wrote on July 13, 2021 - 1:14pm Permalink
Better cabin air filters are always a plus. It would be especially important for owners with respiratory health issues, asthma, or allergies. I wouldn't have spent the extra $750 when Tesla first introduced the new HEPA filter on the Model S, but having it already included for free in the Model S and X, and now the new Model Y, will be a nice feature.