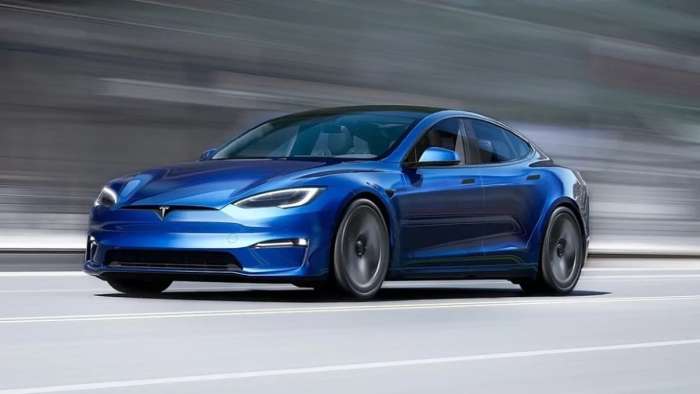 As initial deliveries of the Long Range Model S begin, owners are reporting the vehicle does indeed come with Insane Mode and Drag Strip Mode.
Advertisement

Tesla began deliveries of the refreshed Model S back on June 10. However initial deliveries were limited to the Plaid variant which starts at $129,900 and packs an amazing performance - accelerates 0 to 60 twenty percent quicker than gravity and has a top speed of 200 miles per hour.

The Model S Plaid is an amazing value for money outperforming multi-million dollar hypercars such as the Buggati Chiron and the Porsche 918 Spyder, however, not everyone has $130,000 they can drop on a vehicle, and even if they do, not everyone cares about the performance.

And this is where the Long Range Model S comes in, though not cheap by any stretch of the imagination, the $79,900 starting price makes it more affordable to a wider audience.

Still, despite the cheaper price tag, since a Tesla, the Long Range Model S is still no slouch. The vehicle although not geared for performance has a 0 to 60 time of 3.1 seconds and a top speed of 155 miles per hour.

In addition, a leaked video of the Long Range Model S UI back in March, which was captured when the vehicle was out being tested by Tesla engineers for long-distance reliability, had shown us the vehicle comes with Insane Mode and Dragstrip Mode.

Up to now, Tesla hasn’t confirmed whether this feature will make it to production however, initial deliveries of the Long Range Model S have begun and owners have confirmed the vehicles indeed come with Insane Mode and Dragstrip Mode.

UPDATE: I reported a few weeks ago the Model S LR would have insane mode and that looks to have been confirmed by Jason below who took delivery of his LR. Insane mode is notched right below ludicrous mode.

Tesla announced Insane Mode back in 2015 with the P85D Model S. At the time, Insane Mode allowed Tesla to have the quickest 4 door sedan in the world going 0 to 60 in 3.2 seconds.

Insane Mode was soon replaced with ludicrous Mode which was able to improve the 0 to 60 time to under 3 seconds and eventually under 2.5 seconds. And now with the Model S Plaid, the 0 to 60 time has further improved to 1.98 seconds.

However, Tesla seems to also want to give owners of the refreshed Long Range Model S some fun. And given the performance numbers which are equivalent to the previous performance Model S with Insane Mode - 0 to 60 in 3.1 seconds and a top speed of 155 miles per hour- calling the launch Insane Mode as an homage to Tesla’s first launch mode makes a lot of sense.

However, the fun doesn’t stop there. The new vehicles also come with Drag Strip Mode. There isn’t a lot known about the new feature but it probably has to do with preheating the battery pack for optimal performance and improve cooling for repeated launches.

As of now, we haven’t seen the Long Range Model S with Insane Mode and Drag Strip Mode in action but we will keep you posted as more owners get their hands on the vehicle and take them to the drag strip.

So what do you think? Are you excited about the Long Range Model S? Does the vehicle packing Insane Mode and Dragstrip Mode make it more enticing or affect your buying decision in any shape or form? Let me know your thoughts down in the comments below.

DeanMcManis wrote on July 2, 2021 - 1:12am Permalink
It is very good to see both Insane mode and Drag mode on the new Model S LR. I suspect that it will be quicker than 3 seconds from 0-60MPH in real life. Tesla wants people to pay the extra $50K for the supercar-beating Plaid model, but I think that they will also want some incentive for buyers to pay the extra $23K more over the Model 3 Performance, other than the extended range. So I suspect we will see 0-60 in the high 2 second range, and the 1/4 mile in the high 10s in Insane, Drag Strip mode. That could make the Model S LR the performance value leader. Especially against the the entry-mid-level Lucid and European performance EVs.