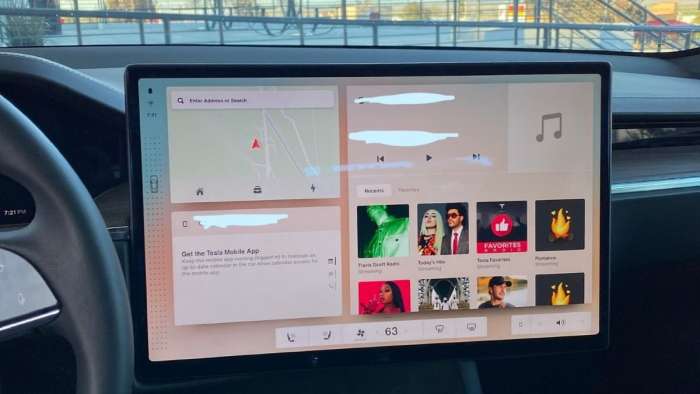 A new video by Reddit user FridayTheDog111 shows us refreshed Model S and X new UI with Insane Mode, Drag Strip Mode, and smart shift. This could also be our first look at version 11 of Tesla's user interface.
Advertisement

After talking with the engineers in charge of testing the vehicle, FridayTheDog111 was able to go inside the vehicle for a brief time. According to him, the Tesla employees were driving from Phoenix to Fremont and were testing the 2 Model S for long-distance driving issues. Here are all the new features.

New UI (Version 11)
The biggest change we see from the images is the new UI. The new UI is significantly different from the one in previous versions of the Model S & X. It’s also not the same as the UI of Mode 3 & Y. Something that is not yet clear is if the new UI is version 11 which is expected to be Tesla’s next significant UI update or implementation of version 10 with a landscape screen and instrument cluster. 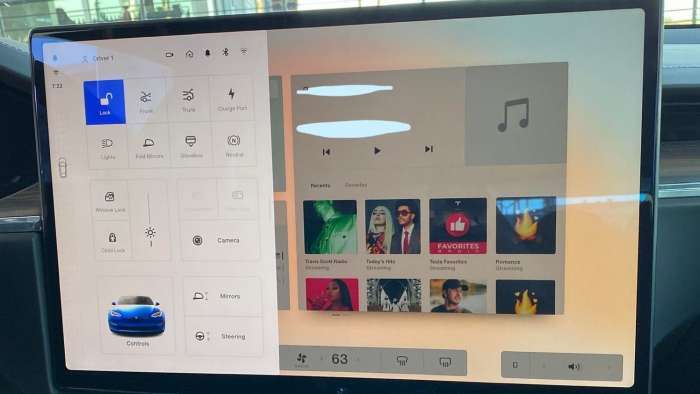 The version 10 release was a year and a half ago so there is a chance Tesla might be doing another significant update. That would mean the pictures shared by FridayTheDog111 on top of being our first look at refreshed Model S & X UI but also our first look at Tesla’s version 11 software.

Drag Strip Mode & Insane Mode
Another tidbit that could be seen in the videos is the Long Range variant of the Model S now comes with Insane Mode and Drag Stip Mode. Tesla announced Insane Mode back in 2015 with the P85D Model S. At the time Insane Mode allowed Tesla to have the quickest 4 door sedan in the world. And it was able to do 0 to 60 in 3.2 seconds.

Insane Mode was soon replaced with ludicrous Mode which was able to improve the 0 to 60 time to under 3 seconds and eventually under 2.5 seconds. And now with the imminent arrival of the Plaid Model S, the 0 to 60 number will further improve to 1.99 seconds and 1.9 seconds with the plaid plus variant.

Related news: Tesla To Use Local Inland Port To Ship from Giga Berlin

However, Tesla seems to also want to give future owners of the refreshed none performance, Long Range Model S variant some fun. And given the performance numbers which are equivalent to the previous performance Model S with Insane Mode - 0 to 60 in 3.1 seconds and a top speed of 155 miles per hour- calling the launch Insane Mode as an homage to Tesla’s first launch mode makes a lot of sense.

However, the fun doesn’t stop there. The new vehicles also come with Drag Strip Mode. There isn’t a lot known about the new feature but it probably has to do with preheating the battery pack for optimal performance and improve cooling for repeated performance. 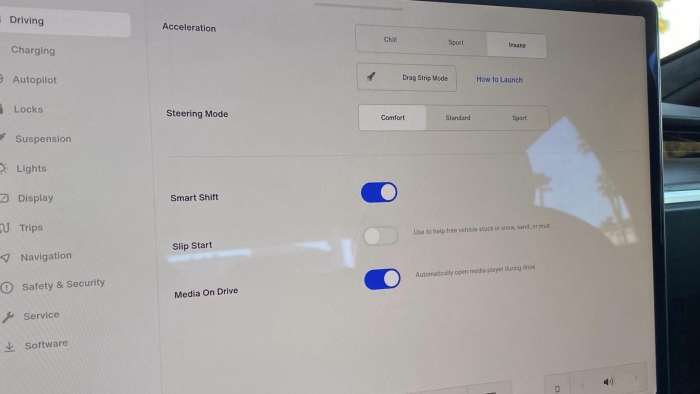 More Tidbits
In the video, we also see our first glimpse of Tesla’s AI gear shifter, at least what Tesla is planning to call this feature. As you can see from the picture above it is called “Smart Shift”. According to FridayTheDog111 owners can disable the feature and use the gear function from the steering wheel.

Tsingshan's Threat to Tesla: EV Maker Is In Battery Crosshairs
Tesla-Funded Research Reveals One of The Biggest Mysteries of EV Battery
END_OF_DOCUMENT_TOKEN_TO_BE_REPLACED