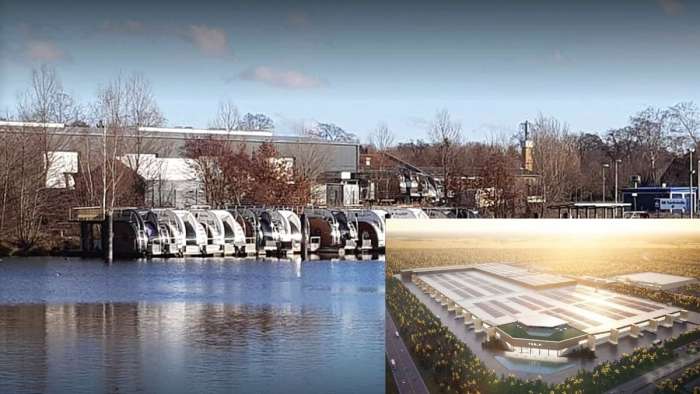 Tesla To Use Local Inland Port To Ship from Giga Berlin

Tesla has applied two new applications preparing Giga Berlin to the next stage before the start of the production, but something equally important is happening nearby, the inland port Königs Wusterhausen thinks Tesla Giga Berlin is Godsend for the port and locals to handle Model Y and supply shipments.
Advertisement

In the meantime, there are already talks of how Tesla will ship its electric vehicles and one idea is that Tesla could give the port in Königs Wusterhausen new momentum, reports RBB. The port in Königs Wusterhausen is to handle all deliveries for Tesla from summer. To this end, the port area is to be expanded by 25,000 square meters. This is a godsend for the port and the region, because four years ago it was on the verge of collapse.

The components that would be installed in the car, says Michael Fiedler, who has been operating the port since 2018, would then arrive in containers in Königs Wusterhausen from all over the world. The Tesla containers from overseas are to be shipped to Hamburg and from there roll on the freight train to Königs Wusterhausen.

The inland port has both a rail connection and a connection to the A10. The port is therefore not only used for transports on the waterway, but also as a transshipment point between train and road traffic. In the future, the containers with the Tesla parts will be loaded from the train and distributed to trucks. These then drive the goods on the A10 to Grünheide, 16 kilometers away. The water connection of the transshipment point and port, on the other hand, will probably not play a role for the business with Tesla.

The port operator has been in talks with Tesla since the beginning of last year. He has drawn up a care plan. Initially, ten Tesla containers will be handled here every day, later 100 per day. For this purpose, a second terminal is being built here, ready for use in just under two weeks. A third terminal is to be built on the south side. Fiedler goes on to say that the tracks are currently already being used to capacity and that he anticipates a significant increase in traffic with the commissioning of the Tesla plant in Grünheide.

Tesla brings momentum to the port

Lignite handling expired in spring 2017 because the Klingenberg power plant was converted to natural gas firing. This meant that two thirds of the total handling volume was lost. Almost half of the employees were laid off at the time. Michael Fiedler took over the port management a year later.

The port has been out of the red after the lignite phase-out since 2020 because it has opened up new industries. With Tesla, there is still a special momentum in the region, says state parliament member Ludwig Scheetz (SPD). He does not see Tesla as decisive for the success of the repositioning of the port, "but of course it is a stroke of luck for us and also for the region as a whole that we can expand the business area accordingly," said Scheetz.

Prepared for Giga Berlin's start of production in summer

The plant in Grünheide should start production in July and be able to produce up to 500,000 vehicles per year. Tesla boss Elon Musk also wants to build the world's largest battery factory on the site. Because approval processes have been slower for weeks than Tesla had imagined, the construction of the electric car factory could possibly be delayed. Michael Fiedler, however, is optimistic: "If anyone can do that by July, then it's Mr. Musk."

According to its own statements, the port is based on the specified start in July.

On another Tesla European development the company wants to close its factory in the Netherlands and 100 jobs are at stake.

Tesla has so far assembled the Model S and Model X in Tilburg, the Netherlands, and delivered them to Germany and a number of other EU countries, for example. This should end when the new generation of models comes onto the market. According to a report by the website nu.nl , which cites an insider familiar with the events, 100 jobs are at risk from the site closure .

In Europe, the new versions of the Model S and Model X will be delivered from November 2021. That would mean that soon nothing will be assembled in Tilburg. Whether there will be alternative jobs for the employees is still to be examined.

Four years ago nobody would have dreamed that tires and steering wheels for the US car manufacturer Tesla would soon be loaded in the port of Königs Wusterhausen (Dahme-Spreewald). At that time, the port was in crisis after the lignite shipping was stopped. Now it is to become a transshipment point for Tesla parts from all over the world.