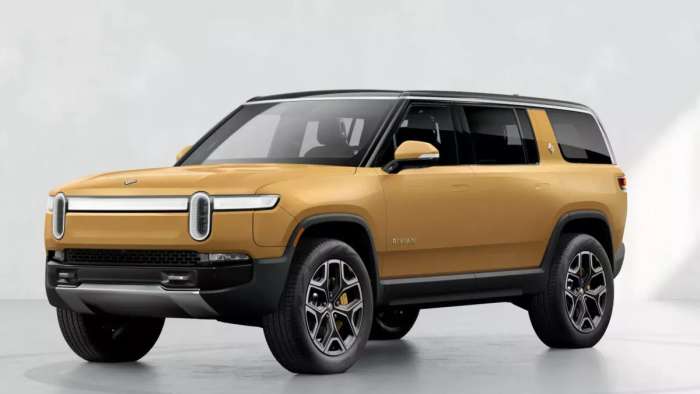 EV startup Rivian comes out with a map for their charging network. Their chargers don't charge as fast as a Tesla supercharger, but it is still a good development for this fledgling automaker.
Advertisement

First let's take a look at the capability of the Rivian charger. Rivian is calling its charging network the “Adventure network”. The Rivian charger can supposedly charge the vehicle to up to 140 miles of range in 20 minutes. The current capacity of this charger is 250kW. Tesla’s superchargers can charge the car up to 200 miles in 15 minutes. Rivian is starting out this network by adding the first 3500 superchargers which are laid out on a map

Why this is a positive development

EV automaker Rivian came out with plans to have a nationwide charging network here in the U.S. They could be seen as trying to copy Tesla, but this also could be seen differently. As EV charging becomes more prevalent, it seems inevitable that many different brands could use the same highway rest stops to place chargers. This would make it easier for consumers to find the charger for their brand of car at popular highly trafficked rest stops.

Tesla Supercharger is the dominant one

The important point here is that the Rivian charger map adopted the same framework as Tesla. They placed the chargers across the country using the same sort of methodology as Tesla. Rivian would like to install 10,000 superchargers across the US and Canada by 2023. Like Tesla, Rivian vehicles will also be able to direct drivers to the superchargers through the car’s navigation system.

Where Rivian Got it Right

Rivian also plans to put chargers at remote parks and other locations. This would be especially useful for consumers who plan to head to national parks in the summer. When looking at Rivian’s map, they seem to have a lot of chargers that are planned to be put in Western Colorado. This is a good move on their part due to the fact that western Colorado has some great off-roading trails. Some Rivian owners will likely be looking to drive their vehicles off-road given that these trucks will have big tires and a high ground clearance. When looking at the same state, Tesla has more of their chargers concentrated near the Denver area. Also, another great feature is that the Rivian chargers can be used by any EV that is equipped with a J1172 plug.

Rivian has two vehicles that are expected to be released this summer: the R1T pickup and the R1S which is an SUV. The R1T is going to be one powerful pickup with 754 horsepower. It will offer up to 400 miles of range.

Check out my article here on Torque News where I talk about potential car companies Tesla will have to compete with going forward. Rivian is not on that list, but may deserve a second look if they can command a big chunk of the off-road EV market with their upcoming vehicles.

What do you think of Rivian’s charging plan? Do they have what it takes? Let us know in the comments.

Michael Beach wrote on March 22, 2021 - 12:05am Permalink
Rivian and Tesla should get together and use their charger network together they would be a huge force to recon with and they are setting up in different areas so the customers would be the winners!