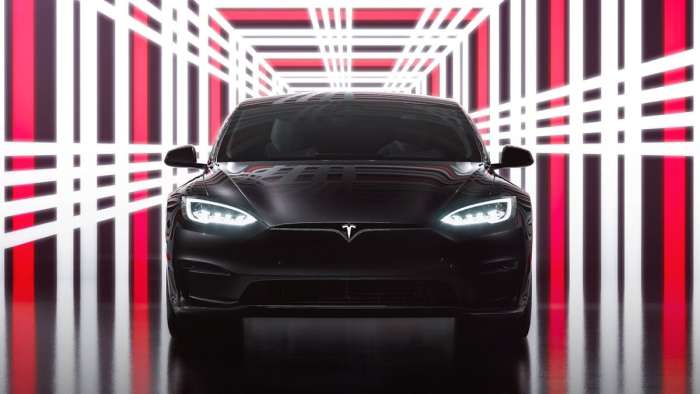 Tesla CEO Elon Musk's favorite vehicle/Tesla and daily driver has been the Model S. And now with the launch of the Plaid variant Musk seems unable to hold back his excitement and now claims the Plaid Model S can accelerate 20% quicker than gravity.
Advertisement

The Tesla Model S Plaid even before starting delivery on June 10 has been breaking world records. And two of those records currently held by the Plaid Model S are the fastest accelerating production car 0 to 60 and the quickest production car to do the quarter-mile.

The first of these acceleration feats was achieved by Jay Leno, who set the world record for the fastest quarter-mile in a production vehicle when he finished the distance in a Model S Plaid in just over 9.2 seconds.

This number makes the 4 door EV faster than multi-million dollar hypercars such as the Bugatti Chiron Sport, Porsche 918 Spyder, and McLaren P1.

However, the Plaid Model S 0 to 60 time is even more insane. According to MotorTrend’s testing, the Model S Plaid was able to do 0 to 60 in just 1.98 seconds making it 10% quicker than the vehicle in the second place, the Performance Model S.

The 0 to 60 time was however not without controversy. Tesla wanted MotorTrend to do the acceleration test on a drag strip with especially sticky asphalt and MotorTrend wanted to do the test at their regular testing site at the Auto Club Speedway in Fontana, California.

Related news: Here’s What Yoke Steering in Tesla Looks Like in Actual Use

Nevertheless, whichever way you slice it Plaid Model S is one of the best if not the best vehicle currently in production.

And now Elon Musk speaking about the Model S Plaid’s acceleration said peak it can generate 1.2g of acceleration which is 20% more than simply falling down.

Peak acceleration is over 1.2 g’s, which is 20% faster than falling

To put that into perspective the Model S accelerating horizontally can travel 20% quicker than a Model S falling down from a height.

Related news: The Original Tesla Roadster and Beyond

And what is even more impressive is Plaid Model S is not some stripped-out dragster with basically an engine and a seat.

The vehicle can seat up to 7 people; has all the latest technology and comfort features not to mention autopilot which will soon be upgraded to full self-driving; gaming hardware equivalent to a PS5 and is also one of the safest vehicles in the world.

Plaid Model S is once again the pinnacle of automotive engineering and a show of Tesla’s leadership position in the automotive world.

So what do you think? Do you think the Plaid Model S is the best car currently in production? Would you like to experience the quicker than gravity acceleration? Or do you think that will be too much? Let me know your thoughts down in the comments below.