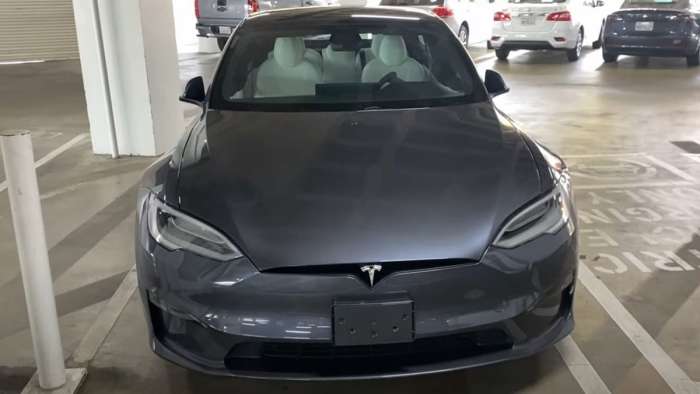 A Stunning 360 Degree Tour of a Tesla Model S Plaid

The long horizontal screen is also a nice touch for the Tesla Model S Plaid. I have seen many vertical horizontal screens in Tesla’s, but the company seems to be moving toward horizontal as a standard. The inside of the car looks slick and there doesn’t appear to be any panel gap issues that I noticed.

The door handles are the same color as the paint of the car, adding to a more blended look for the vehicle. This is a nice touch and makes the car much cleaner and leaner looking.

The arachnid wheels and new rims are stunning. They look very structurally strong and there is a Tesla logo in the middle of them.

The PLAID in metal text on the back of the car is also a nice touch, adding to Tesla’s branding for this car.

A Secret About the License Plate

On the license plate, the number 63277 can be seen. This has been seen on many pre-delivered Tesla vehicles and many are curious what it means. It is the manufacturer ID assigned to Tesla.

Tesla likely had to apply for and get a license as a motor vehicle manufacturer from California. With that you can request a certain number of manufacturer plates. Their purpose for this is to drive manufacturer-owned vehicles on public roads without having to register the vehicle like normal with the state DMV.

The Tesla Model S Plaid is a clean and slick looking car. It's one of the many reasons Tesla as a company is going to the moon. Have you spotted any? Will the Tesla Model S Plaid battery last 1 million miles? At the moment, this seems like a rare event to find one as the Model S Plaid delivery event isn’t until June 3, 2021. What do you think of the car? Will you be getting one?