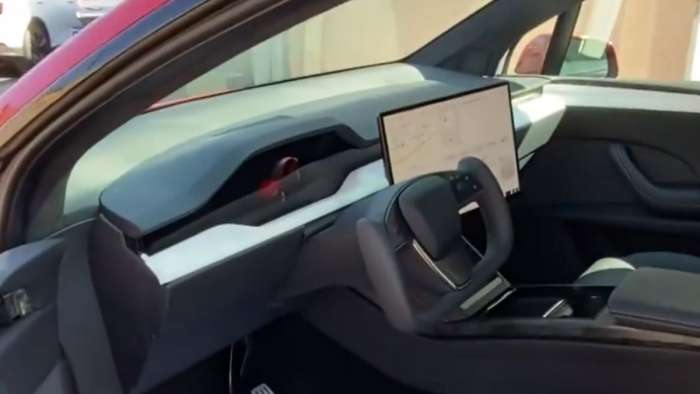 We have a teaser video of the Tesla Model S/X steering wheel, a yoke steering wheel. What was once concept art is now being seen for real. Let’s dive a little deeper and see what people have to say about it.
Advertisement

Here is a brand new video from the Instagram user, tsportline:

Is the Yoke Steering Wheel Safe?

Opinions are mixed on Tesla’s new Yoke steering wheel. The National Highway Traffic Safety Administration (NHTSA) seems okay with the concept of the new Tesla yoke steering wheel, but can’t yet determine if it meets safety guidelines or not.

The question I have is – is the yoke steering wheel truly safe? What benefits does it provide? Will it come under scrutiny be regulatory agencies?

One user on the Instagram post for the new steering wheel states that they now have to wait until October, instead of May, for their order of their Tesla car. It’s unknown which model this is for. A reply to this was that good things sometimes require a wait.

Another user shares that “the yoke is the way” and why would we want to keep the same steering wheel from the past 100 years.

The reception overall seems positive. The only people who seem to not like the Tesla yoke steering wheel are those who like to rest their arm on top of the steering wheel at the “12 o’clock position”, but other than that, I think most people want to try it out.

Another user wondered how this video was taken of the refreshed Tesla Model S. I find myself asking that question too. Was the video done by a Tesla employee? Did the creator of this video go to the Tesla Gigafactory and request the video? I’ve asked the question, but with no answer yet.

What I Think of the Tesla Yoke Steering Wheel

I personally like the Tesla yoke steering wheel. It’s a fresh and new design change to something that has been the same way for about 100 years. I can see it taking less effort to turn and move the car. And I also think that for full self-driving purposes, that the yoke steering wheel will be easier for the car to maneuver with because it has less overall mass and therefore will be easier to turn.

I also like that the Tesla yoke steering wheel allows you to see above it – so you can see the screen behind it and whatever information is on it. Most normal steering wheels make it harder to see the information there.

Is the Tesla Yoke Steering Wheel Here to Stay?

It’s tough to say if the Tesla yoke steering wheel is her to stay permanently. The only way I can see it NOT happening is if regulatory agencies find it to be unsafe. I find this an unlikely scenario because Tesla cars are known for their safety. And if Tesla failed to test this new steering wheel, that would be a big surprise to everyone.

What do you think – do you like the Tesla yoke steering wheel? Have you had a chance to see it in person? What are the odds of it getting shut down by regulatory agencies?