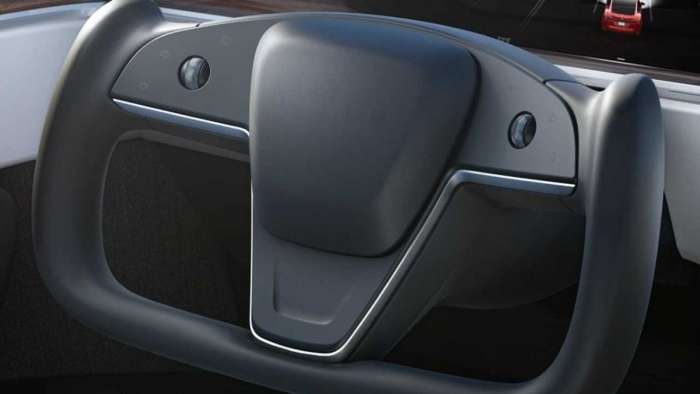 The new, refreshed, 2021 Tesla Model S was just revealed, showing changes inside and out. And a couple significant changes to the traditional steering wheel have the internet buzzing about the new Love-it or Hate-it design.
Advertisement

Everyone knows that automotive steering wheels are round, right? That is why they call them steering “wheels”. But Tesla is in the business of reinventing how cars are being built and designed, and the latest Model S now has a steering Yoke, which is not a wheel. And it looks more like an airplane yoke, or a Formula 1 race car steering wheel/yoke. This means that it looks somewhat like a traditional steering wheel, but with a flattened bottom, and the top of the wheel cut off.

Outside of racing cars and airplanes, several new concept cars have shown off a similar yoke steering wheel design. In fact, both the new Tesla Roadster and the Cybertruck concepts featured a similar steering yoke, and even Mercedes new Vision EQS concept car has a yoke steering “wheel”.

The questions are: Is this real? Will it truly be on the production 2021 Model S and X? Will government safety agencies approve the design for road use? Will Tesla offer a traditional steering wheel as another option for buyers? And simply, Why Change?

As to national safety approval, the National Highway Traffic Safety Administration said: “At this time, NHTSA cannot determine if the steering wheel meets Federal Motor Vehicle Safety Standards,” the federal agency replied. “We will be reaching out to the automaker for more information.”

Referring to alternative 2021 Tesla steering wheel designs, someone digging around in the Tesla configurator website code came up with a Tesla image clearly showing the new Model S interior, but with a full steering wheel. This shows that Tesla probably has a fallback plan with a traditional steering wheel as an option, or perhaps as an emergency backup. In case government regulators push back on their new designs.

Other than looking cool and modern, you have to wonder why Tesla decided to change the steering wheel, which is one of the most recognizable parts of every car and truck built over the last 100 years. Even in just learning how to drive, we were taught that the best way to drive a car was to hold your hands at the Ten O’clock, and Two O’clock positions on the top of the steering wheel, for maximum control. And also to practice the “hand over hand” movement to rotate the steering wheel quickly and efficiently when turning. Both moves are impossible with Tesla’s new steering yoke.

And the Yoke itself is not the only change that has people talking. In addition, Elon Musk said that the Yoke will not have traditional stalks behind the wheel. You can see in the steering wheel images that the directional indicators (turn signals) are now buttons on the left side of the yoke. This will also take some getting used to, as we are all programmed to move the turn signal stalk up or down to indicate our desire to change lanes or make a turn.

But that is not all that Tesla changed. Apparently, the directional control (gear selector) is automatically controlled by the onboard computer, which looks around the outside of your Tesla and “guesses” which way to drive. (I am not kidding here). Elon did add the comment that direction selector buttons (Forward/Neutral/Drive/Park) would also be available on the main screen, just in case the computer automatically chooses incorrectly. Realistically, I’d say that this auto-select drive feature could either be very intuitive and simple or potentially catastrophic, depending on how well it predicts what you want correctly. Most likely, this feature will be disabled by default, and you can just use the screen controls.

Why Reinvent the Wheel?

Under the category of “If it ain’t broke, don’t fix it” you have to wonder what was so wrong with the steering wheel, stalks, and gear selector that they needed to be reinvented? And one answer is: Nothing. Saying that this is just a marketing move to get the internet stirred up over a Big, New, Disrupting feature/innovation that Tesla tosses out into the automotive world, may just be true. Tesla has “pioneered” several new features before, answering questions and fixing problems that most people had never considered to be a problem before. Examples here are Tesla’s BioHazard air filters, Falcon-Wing doors on the Model X, and Bullet-Proof glass on the CyberTruck. Were they necessary? Nope. Did they strike up controversy and discussion centering around Tesla? Yes!

This could also be a sign that Tesla simply has great confidence in their upcoming Full Self Driving system, and that this is just a middle step before Tesla removes the steering wheel and driving pedals entirely from their new cars.

As much as I sound very skeptical about these designs, if I had the choice to order my new Model S Plaid+ (wishing here) with, or without the new changes, I’d probably keep the car’s design as presented, and adapt to the new bits.

What do you think about these new Tesla design changes? Is this a breakthrough, or bad idea?

John Goreham wrote on February 2, 2021 - 11:38am Permalink
I test a lot of extremely sporty and high-performance cars. I don't understand how a yoke will work. Even the most extreme cars need a wheel that can turn more than one revolution. The reason is that the arm inputs are too small with a wheel with less. That creates a lot of real-world usability problems. I'd have to try it to be convinced it makes any sense. I also don't understand the connection between performance and autonomous vehicles. Once that wheel goes away, high performance is useless. Screen controls for the drive selector? I guess that's no different than the pushbuttons other brands have used.
DeanMcManis wrote on February 2, 2021 - 8:49pm Permalink
The car is still a month away from delivery, so we do not know details of how it will work. It could be that the steering has a variable assist that turns the car's wheels more at slower speeds, so that making a U-turn would just require a 90 degree rotation, but at faster speeds there would be less and less gain/assist. But I'm just guessing here. Performance does relate mostly to driving the car yourself, but having more power could help with auto-driving as well, just not very often. Generally for a commuter car, you want comfort and economy. And for FUN you want performance. With most internal combustion engine cars you have always had to make the choice between maximum economy, performance, or comfort/luxury. But EVs can allow a car to provide maximum economy for commuting, along with comfort, and also have the convenience of auto-driving functionality. And then when you want to drive the same car yourself (for FUN) then you will want to access the car's abundant power. For dedicated, fully autonomous (RoboTaxi) vehicles that won't have a steering wheel, they only need for the power to be ample, rather than outrageous. For the cars that we are seeing today, autonomy is not complete, so the steering wheel cannot completely go away yet. And for most cars, I don't see it going away at all.
Charles wrote on February 28, 2021 - 1:55pm Permalink
I have been looking forward to a longer model x with longer range than my current one to upgrade. I will not upgrade if I can't get a normal steering wheel with turn signal and shifting stalks. I have tried to have an open mind about this and have tried driving with my hands on the lower half of the steering wheel and HATE it. It does not feel right for making turns. I also don't want to have the car guess what direction I want to go having the shifting on the touch screen means searching more buttons if you want to override. No thank you. Same goes for the turn signals. I will look at other options if Tesla refuses to offer traditional steering wheel and stalks for the Model X.
DeanMcManis wrote on March 1, 2021 - 12:47pm Permalink
There is a good chance that Tesla will also offer a round steering wheel as a no cost option. But I don't think that the turn signal or shifting stalks will return on new Teslas. I'd have to drive around a bit to see how well turn signal buttons work, but I think that having the directional shift buttons on the screen as an option would be fine.