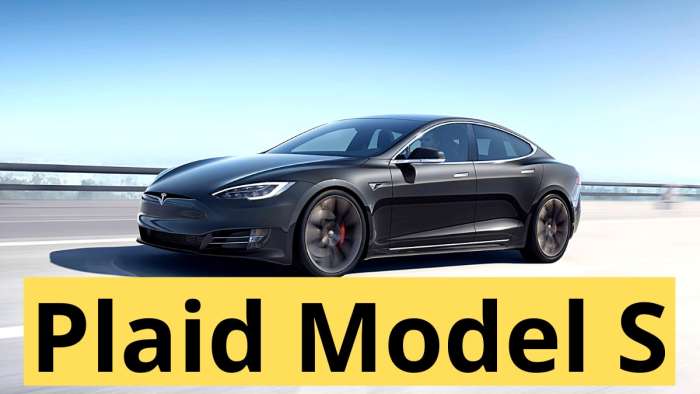 Tesla's fastest option was Insane, then it was Ludicrous, soon it will be Plaid. Here is what we know so far about the upcoming Tesla Model S Plaid reveal.
Advertisement

Will the Plaid Model S Performance be the showcase vehicle for Tesla’s new "Million Mile" batteries?

As a quick background, Plaid is a nickname for Tesla’s newest high-speed platform. The Plaid name is from the Movie Spaceballs that designates a speed faster than fast. The quickest Tesla Model S was the P85D and it could be equipped with an “Insane" mode that allowed the car to accelerate from 0-60 in an amazing 3.1 seconds (faster than a McLaren F1 supercar), but then Tesla came up with a faster “Ludicrous” mode (also from Spaceballs), and Elon Musk spoke of an even faster Plaid mode coming in the future.

Well, it turns out that most likely the “future” actually means later this year, but the Plaid designation turns out to be more than just software and inverter tweaks. It refers to a whole new Tesla drivetrain.

Today’s Model S Performance has a dual motor setup, and the current “Raven” version has a new front motor, and also a recently upgraded “Cheetah” mode that allows the Model S to hit 60MPH in 2.3 seconds and do a 10.4 sec 1/4 mile. But the Model S Performance still uses the older Panasonic 18650 batteries to get that amazing performance. Elon Musk confirmed earlier that in addition to having 3 motors (one in front, two in the rear) that the Plaid Model S would also have a bigger (than 100kW) battery.

Even though the Plaid mode was mentioned way back in 2012, the first car that was shown with the Plaid powertrain was the upcoming Roadster 2, and it claimed to provide an amazing 1.9 second 0-60 time, 8.8 seconds 1/4 mile, and go 620 miles on its 200kW battery. Well, unfortunately, the pandemic has pushed out the new Roadster at least another year (to 2021), but we already knew that the Model S would be the first Tesla to show off the production, three-motor, Plaid drivetrain, hopefully later this year.

Last year, it looked like Tesla was going to simply update the Model S with the newer Panasonic 2170 batteries (used in the Model 3 and Y), but since that time Tesla has filed for patents and has done tests on a new battery design that they intend to build themselves which will use their new acquisition Maxwell’s dry electrode technology, possibly combined with a single crystal cathode, new electrolyte material, and no-connector-tabs design, to improve all aspects of the battery production, performance, and reliability. This new battery technology has been dubbed the “Million Mile” battery because the testing has shown minimal battery degradation over 4000 charge cycles.

The official details of the million-mile battery, plus several other new battery technology details were planned to be revealed this month at Tesla’s Battery Day event, but the uncertain socio-economic times forced factory shutdowns and delayed the long-awaited event. The latest news says that Elon Musk will have a webcast Battery Day reveal in June, followed by an in-person event a few months later.

Historically, Elon Musk has done dramatic presentations at his public events, often showing off new technologies and new vehicles together. My suspicion is that we will hear all about the details of the new Million Mile battery technologies, and capabilities in June along with news on CATL’s low-cost batteries for Tesla’s Chinese market, plus plans for their RoboTaxis, their new Autobidder software, bidirectional charging, and more.

Since the Plaid drivetrain was already slated to be sold later this year, it would be a crushing blow to competitors if Tesla combined the Model S Plaid powertrain with the upcoming Million Mile battery pack. In one sense that seems like it is too tight of a timeframe to go from just patenting new battery technology to actually producing a brand new battery pack in large quantities for the upgraded Model S. But it could be that Tesla has already built and tested these new batteries during their “secret” Roadrunner project testing, and they could potentially be ready for production and use in the updated Plaid Model S in a few month’s time.

Is it wishful dreaming, or a real possibility that we could see a Million Mile battery-powered Plaid Model S before the end of this year?

JC wrote on June 2, 2020 - 4:43pm Permalink
I hope Tesla updates this year the standard long range model S with this new drive train (Better performance at the same price) and longer batteries - and hopefully some update on the 2012 interior and almost unchanged exterior.
Richard Brovont wrote on July 16, 2020 - 10:43pm Permalink
Thanks for your informative article Dean. The battery capacities are 100 & 200 KWH, not kW.