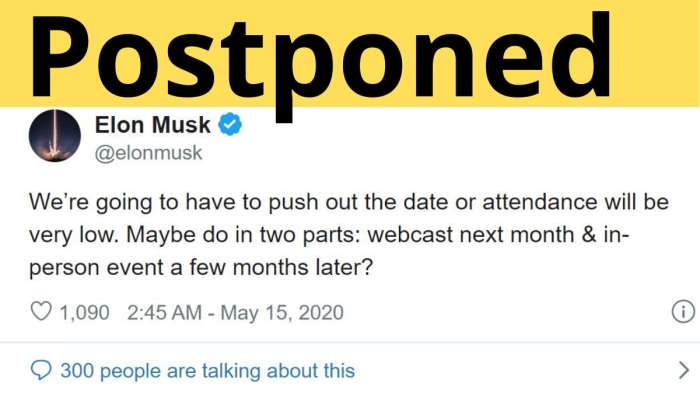 Just a few hours ago in the middle of the night Tesla's CEO Elon Musk responded to a tweet pushing back the much-anticipated date of the Tesla Battery Day event and making a new announcement.
Advertisement

"We’re going to have to push out the date or attendance will be very low. Maybe do in two parts: webcast next month & in-person event a few months later?" This is the tweet Tesla CEO Elon Musk wrote in response to Twitter user Viv's question, asking "just one little treat, please ... tell us the date."

Elon responded with that new update about the Tesla Battery Day: an event that is expected to be Tesla's biggest event of 2020.

This morning Torque News reported what Tesla Battery Day postponement means and details surrounding the new battery developments in our latest report on our Youtube channel.

Some people welcome the idea of holding to separate events, while others say Tesla should hold a single Battery Day event with people attending in-person because of there no chance for this event to have low attendance.

For months, CEO Elon Musk has been curious about this much-anticipated battery information day at which Tesla wants to present concrete plans for the affordable production of batteries in the terawatt-hour scale. The Battery Day was supposed to take place in the 3rd week of May, but now that it is postponed we have to look for June or July.

In the meantime Reuters yesterday reported that the announced Tesla battery for 1 million miles should come at the beginning of 2021 at the latest. It will cost well under $ 100 per kilowatt-hour from the start and become even better and cheaper later. Tesla's partner for this new breakthrough battery is CATL from China. This will turn Tesla into becoming one of the largest energy providers in the world.

CATL as an Important Tesla Partner

Tesla CFO Zachary Kirkhorn made it clear at the end of April that Tesla did not plan to go it alone when it comes to making own Tesla batteries. CATL managers confirmed it this week in a conference call. Tesla has been talking about a battery that has a usable life of 1 million miles for a long time - and has filed patents for it together with research partner Jeff Dahn. And soon, according to the Reuters report, it will become a reality with CATL as a development and production partner: The cheap super battery will come in late 2020 or early 2021 at the latest, the agency writes, citing informed people.

Regarding the postponed Battery Day, I would be ok with a two-part compromise, but I don't know what needs to be shown to people directly, which would make an in-person event necessary. However, I am in favor of in-person Battery Day Event, because I don't want everything in our lives to go line. We are not isolated social robots. We are human beings and need to be able to get together, to laugh together, to cry together to care for one another. Otherwise, love will grow cold.

See you in our latest report where we explain Plaid Model S and what Tesla may do with it in the Battery Day event.