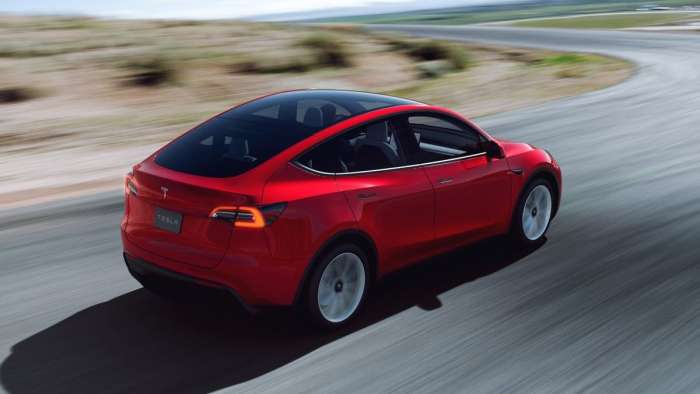 According to rumors, Tesla is planning to export made-in-China Model Ys to European customers. Model Y deliveries in Europe could begin as soon as the beginning of Q3 2021.
Advertisement

Tesla is currently in the process of building the company’s first European factory in Grundheide Germany.

The initial vehicle slated to come out of the new factory is a redesigned Model Y. The second-generation Model Y will include Tesla’s newest 4680 cells announced at the company’s battery day event.

On top of that, the made in Germany Model Y will also include a structural battery pack, single-piece front casting, and stunning new colors which subtly change with curvature.

According to our analysis based on information, Tesla provided at the Battery Day event the Giga Berlin Model Y might have a 474-mile range.

According to Tesla’s plans, the plant was slated to begin production by the middle of 2021 however, permitting delays have pushed the start of production to the end of 2021.

This has meant Model Y delivery to European reservation holders has also been pushed back by several months.

However, according to some insider information, until Giga Berlin begins production, Tesla might be planning to ship Model Ys built at Giga Shanghai to European customers.

Related news: Tesla Could Have Big Plans Up Their Sleeve For Future FSD Software Updates

The information comes via Troy Teslike who monitors Tesla's worldwide deliveries. According to his Patreon post, Tesla will begin exporting Model Y from China to Europe at the beginning of Q3 2021.

NEWS: @TroyTeslike shared some info on his Patreon from his sources:

1: Tesla will start exporting Model Y from China to Europe in early Q3 2021. The reason that was mentioned was that there is a big MY order backlog in Europe and there are some delays with Giga Berlin

The reason Tesla decided to ship vehicles from Giga Shanghai to Europe is, according to Troy, there is a big Model Y order backlog in Europe and there are some delays with Giga Berlin.

This is exciting news for any Model Y reservation holder in Europe who can’t wait to get his/her vehicle.

And for those fearing the Model Y built at Giga Shanghai won’t be as good as once built at Giga Berlin, Troy says made in China Model Ys are extremely high quality.

Model Ys assembled at Giga Shanghai have a build failure rate of less than 3%. As compared to the broader automotive world this is exceptionally low.

5: Model Y production in Shanghai has a Build Failure Rate of less than 3% which is exceptionally low in the industry. The target for Model Y 2.0 in Berlin is less than 2%.

You can support @TroyTeslike on Patreon here. He does great work: https://t.co/UxVTfdIlaI

However, Tesla is planning to go beyond this at Giga Berlin and lower the build failure rate to as low as 2%.

To fulfill the European demand for the Model Y production in Shanghai will ramp up in Q3, and production targets are very high for Q3 and Q4 says Troy even though he did not provide any specific numbers.

So what do you think? Are you excited to get your hands on a Giga Shanghai-made Model Y? Any of you a reservation holder? Will you be waiting for the second generation Model Y or will you be getting the made-in-China Model Y? Let me know your thoughts down in the comments below.

Daniel wrote on June 20, 2021 - 9:54am Permalink
Voilà 1 année que j’ai réservé un modèle y , je ne veut surtout pas du chinois chez moi , j’attend avec impatience le modèle de haute fabrication allemande de Berlin. On y va !
Ybus wrote on July 12, 2021 - 10:55am Permalink
I ordered the MY few days after the announcement , so years ago! I think I'll wait few more months to get the European version... Mostly for the battery and new paint quality.
Andreas Olsson wrote on July 13, 2021 - 4:04pm Permalink
I ordered a MY in april and has now got a delivery estimate in August/September. I was aiming for the 4680 and new paint. I think I will wait until the Berlin made version. I wish it was possible to keep my order and just schedule a later delivery…
antonio wrote on December 6, 2021 - 11:29am Permalink
HI, anyone would know what is the best way to find out when the Model Y will start shipping out of the berlin Giga Factory ? I went to the tesla shop here in France and every question I asked the answer was " we don't know ". Since I am in not rush to order my Model Y I would like to wait for the European one mainly if that means it will have the new battery. Any Information would be highly appreciated