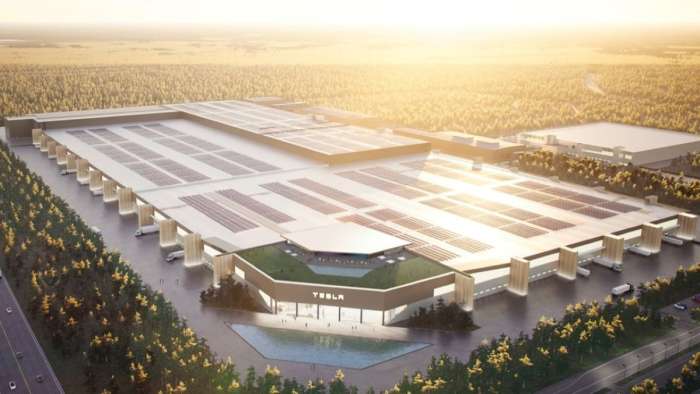 Brandenburg's Prime Minister Dietmar Woidke is happy Tesla will be adding cell manufacturing at Giga Berlin site even though that will likely cause delay of vehicle production.
Advertisement

Back in January, Tesla got the go-ahead from Germany’s Federal Ministry of Economics to begin preliminary work on the battery plant that will supply Tesla’s Berlin Gigafactory.

The announcement came from the Ministry’s Chief Peter Altmaier who bundled the applications of multiple companies looking into battery cell manufacturing. Altmaier then submitted the proposals to the EU Commission.

The German Economy Chief, together with Tesla, submitted the names of 42 companies looking into battery cell manufacturing in the EU to the commission.

The EU after deliberating on how to allocate 3.5 billion dollars of aid to be divided up among all the participants awarded Tesla 1.2 billion dollars.

This might have been done to expedite the process however, according to the Brandenburg State Environment Agency, changes to the factory’s plans are significant enough that the application for environmental approval will probably have to be publicly interpreted again.

This process is expected to take additional 3 months and as a result, delay the start of production at Giga Berlin by the same amount of time.

However, even though the addition of the battery plant might delay the start of production, Brandenburg's Prime Minister Dietmar Woidke is happy Tesla will be adding cell manufacturing at the site.

"The application, which Tesla will soon have submitted changed - expanded to include the construction of a battery factory - is positive news for the country," said Woidke to the German press agency. "It's an additional investment that Tesla has obviously decided to make here."

However, Woidke seems to suggest if Tesla adds an application to build a battery plant to the current permit, the issue of delayed final permitting will be out of his hand

"If this additional investment now flows into the permit application, it goes without saying that the application documents must be revised, and then the approval authorities have the last word," said Woidke.

"We are well-advised to do everything we can to ensure that the entire permit for car production in Grünheide runs in a legally secure manner. The further process is currently being discussed."

Seen in the grand scheme of things this delay will be a small hiccup in Tesla’s plans of being the biggest automotive company in the world by 2030.

Tesla’s Gigafactory in Berlin is expected to be the EV maker’s most advanced factory to date. Among other things, the plant is expected to incorporate Tesla’s newest 4680 cells with a structural pack.

In addition, the Model Y, the first vehicle that will be produced at Giga Berlin, is expected to have stunning colors that subtly change with curvature.

According to Elon Musk, this will be the most advanced paint shop in the world, and construction of the paint facility with Tesla’s partner Geico Teiki-Shai seems to be progressing well.

So what do you think? Do you agree that Tesla has to undergo a second public hearing because of the addition of a battery plant?

For more information check out: Guangzhou’s Traffic Police Refutes Rumors of Tesla Being Banned from Chinese Highways Also, see Rise In Steel Prices Could Affect Cybertruck Prices Ahead of Launch