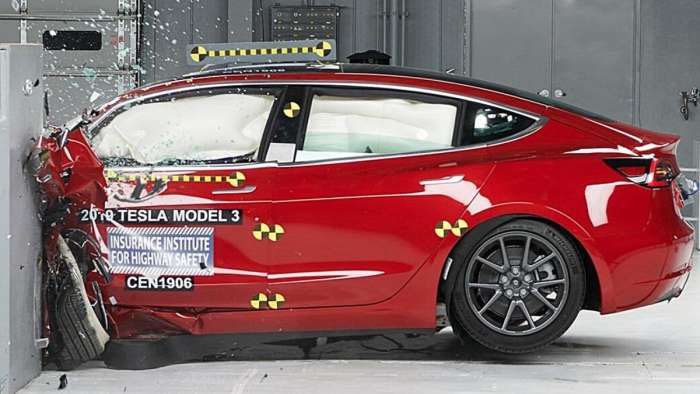 New footage from what looks like IIHS shows a Tesla Model Y going through some crash testing. The way the frame of the Model Y holds up during a crash is quite impressive and can be attributed to many different factors.
Advertisement

The Tesla Model Y was shown doing a crash test side by side with a Lexus UX 200. Both these vehicles are major players in the compact SUV segment. The two cars are shown crashing into a barrier sideways. It appears from the video that the Model Y might have sustained more windshield damage, but the Model Y does do better in the most important category here which is keeping the driver protected. The driver’s side door on the UX 200 got pushed inward more so than the Model Y due to the impact of the crash.

The tweet above from Torque News outlines three important reasons which are listed below as to why Teslas hold up well in crashes.

It is an amazing feat that Tesla can make cars that are quite heavy by most standards yet are so fast going 0-60.

Reason #2 - No engine in front trunk

Most cars have the engine in the front, and the engine will often be destroyed in a crash. Tesla’s battery is kept hidden away. This makes it so the battery is less likely to go to waste in an accident.

Tesla’s FSD system has helped avoid a large number of collisions. This hasn’t prevented the outcry against FSD after every accident. There is a lot of work to be done as to how FSD could avoid different types of crashes. A good strategy would be to just configure FSD to respond to the most common types of crashes that occur due to human error.

The most common type of accident is a rear end collision. The software would learn through experience. Tesla could do many more real-world accident simulations, and then go back to the drawing board to program FSD to respond accordingly.