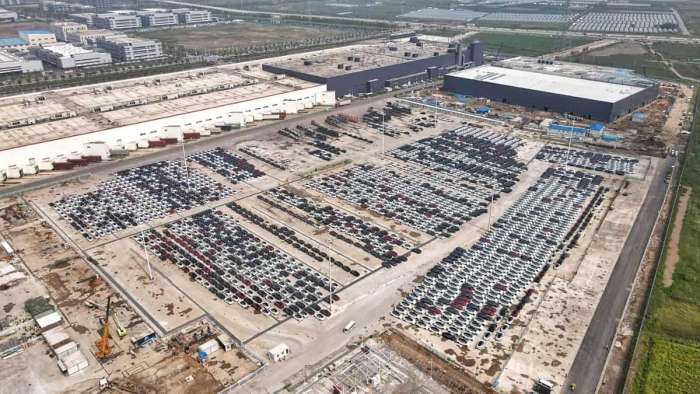 "Because of the "brake incident" at the Shanghai Auto Show, the Shanghai factory has upgraded security measures, and today's flight was stopped by factory security personnel, and the aerial footage was requested to be deleted, sorry! The pictures are surviving today," wrote Twitter user Bentv_sh, known as Youtube WU WA who has been regularly providing drone footage from Giga Shanghai updating on Tesla China's progress.

The accompanying image in this story is the only survived picture that you see here.

As you know recently there were two incidents at the Tesla's boot at Shanghai Auto Show. One was the woman who climbed on the top of a Tesla vehicle and voiced her complaint against Tesla, forcing Tesla to publicly release crucial accident data showing what happened minutes before the China accident. The second was this new incident at Tesla's Boot in Shanghai Auto Show prompting Tesla to respond. “The man is not a Tesla owner. Not there to protest. Simply wanted to show his banner (unspecified) at Tesla booth.” We don't know what was written on the banner.

A new incident at Tesla's Boot in Shanghai Auto Show yesterday prompted #Tesla to respond. “The man is not a Tesla owner. Not there to protest. Simply wanted to show his banner (unspecified) at Tesla booth.” We don't know what was written on the banner. (Follow us). - @ray4tesla pic.twitter.com/xbuOc55jOQ

Torque News tweeted today to Tesla CEO Elon Musk and asked if anything can be done about this situation because in the past with Elon's node drone operators were allowed to make videos at Giga Berlin and Gigafactory Austin, allowing us, the news reporters, to regularly report news about Tesla's progress.

Please, retweet the tweet below and tag Elon Musk, thus helping us to get many retweets to get this to the attention of Elon Musk and hopefully with his intervention something can be done.

According to WU WA due to the recent incident at the Shanghai Auto Show #GigaShanghai has upgraded its security and didn't allow his drone flight to carry on. #Tesla's security requested the area footage to be deleted. @elonmusk may be something can be done?
-@bentv_sh pic.twitter.com/aSYz2vJ3gO

What Else Does This Giga Shanghai Image Show?

Simon Alvarez from Teslarati notes that "a massive fleet of over 2,300 Tesla Model 3 and Model Y has been sighted in the Gigafactory Shanghai complex, with the EV plant’s expansive holding lot filled by rows upon rows of the best-selling all-electric sedan and crossover. Such an image hints that Tesla is not resting on its laurels in the second quarter, and that Giga Shanghai is still going full throttle in its production ramp."

Indeed Tesla is not resting and the EV production at Giga Shanghai factory is moving ahead.

You may note that the parking lot seems pretty dirty. it's not because of an incident, but WU WA says it rained all day yesterday, "so maybe it's not completely dry resulting in the patchiness."

To be fair to Tesla, I understand its concern for security. There is so much going on and so much feelings involved in people that someone can do something foulish using a drone.

On a relevant news with Tesla in Asia, Tesla and Samsung have signed a new contract. This time Samsung will be supplying Tesla with LED smart headlamps for their cars.

What do you think about Tesla upgrading its security at Giga Shanghai factory? Does it go against Tesla's vision of transparency or Tesla has the right to protect its workers and assets? Please, let us know in the comments section below.