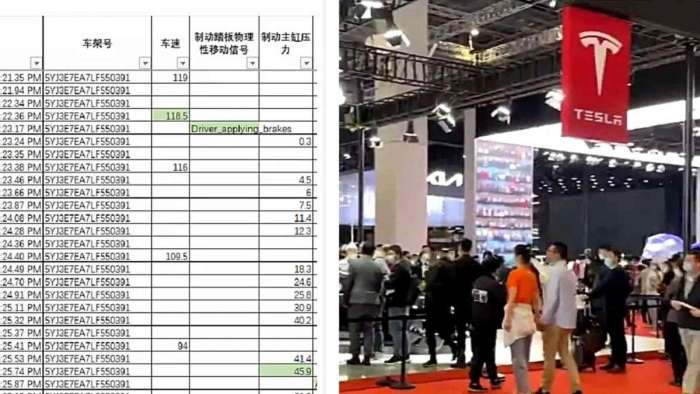 I think it's the first time that Tesla has reportedly publicly released the data logs from a customer’s vehicle involved in a crash that led the owner to protest at Tesla’s booth at the Shanghai Motor Show, showing what happened.
Advertisement

Yesterday, Tesla expressed its willingness to cooperate fully and provide the raw data of the vehicle half an hour before the incident to a third-party appraisal agency or a technical supervision department designated by the government or consumers.

This afternoon Tesla’s person responsible for handling the accident told a reporter from China Market Supervision News: “We have already sent data emails to customers. The customer has never answered the phone. (We are) sent to the email address the customer filled in when they bought the car through the company email." 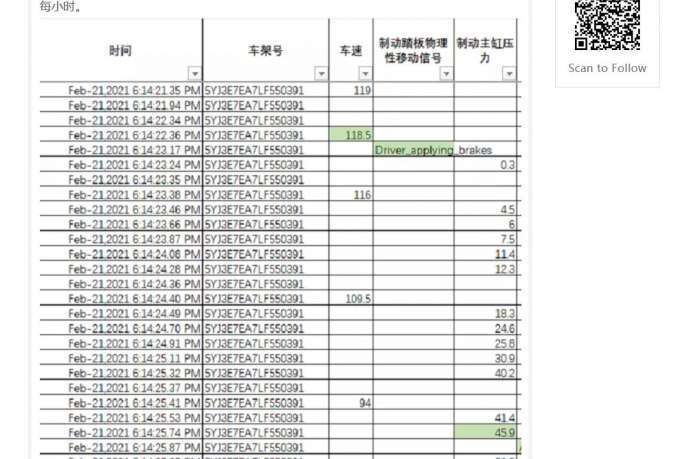 To sum up, the vehicle is running at a higher speed, and the driver starts to depress the brake pedal with less force. After that, the automatic emergency braking function is activated and takes effect, increasing the braking force and reducing the impact of the collision. The driving system is normally involved in the work and reduces the speed of the car.

The relevant person in charge of Tesla stated that he would cooperate with the regulatory authorities to carry out in-depth investigations without reservation, and openly accept social supervision, explains China Market Supervision New.

This data itself is amazing. On one hand, it's a positive step by Tesla toward transparency. On the other hand, Tesla publicly releasing this data is shocking and possibly even a shame how Tesla is handling sensitive customer data! They are a company and should not act like it. Is this releasing private information to the public without the consent of the driver and owner of the data?

I just don't understand one thing. If in previous occasions Tesla hasn't published any logs for privacy sake, why has Tesla done it now, specially when the costumer hasn't responded to agree to it?.

Also, see Torque News Tesla reporter Daniel Cappo's coverage on the subject, titled: Tesla Autopilot Can Function Without An Operator In The Vehicle.

Following an incident on Monday when a Tesla owner protested by climbing on a Model 3 at the Shanghai auto show, Tesla has been facing an onslaught of criticism by the Chinese government. And the EV maker has issued an apology.

In the meantime, Tesla is working on vehicles tailored to Chinese consumers as complaints about the quality of its electric vehicles send shock waves through the internet in the country.

Julia wrote on April 25, 2021 - 9:05am Permalink
What are the privacy laws and customs in China? It may very well be standard and I controversial to release what we would consider private data. At least it’s something to check because if you just say that they’re now releasing everyone’s information people will get concerned. Would it be possible to investigate this and write another article if it turns out that this is something in line with Chinese culture or Chinese authorities? Thanks.
DeanMcManis wrote on April 26, 2021 - 2:52am Permalink
The driver is NOT the owner of the tracking data. And Tesla did try to contact them first with the data, but they falsely and publicly accused Tesla of having poor brakes at a big car show. The driver was speeding, going 75MPH on a road with a 50MPH speed limit, then he was improperly applying the brakes, and then Tesla's safety systems intervened to apply brakes fully, which lessened the severity of the accident. Showing the actual vehicle data is vital to transparency. I believe that many of these kinds of complaints are specifically made to blackmail automakers to pay settlements to avoid bad press. I am very glad that Tesla openly showed the data (which the bad driver says has been altered) to reveal that it was actually the driver (and not the Tesla) which was clearly at fault here. Plus Tesla apologized for not handling their case better in getting them the data earlier. And they have instituted a new process that releases accident data to Tesla drivers more quickly now.