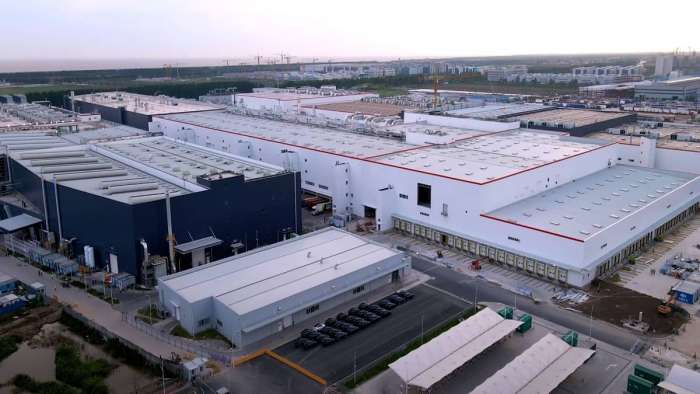 We have some stunning areal footage from up above Giga Shanghai, from YouTube user Jason Yang. It's impressive the sheer amount of infrastructure required for this Giga factory.
Advertisement

What do I see in the aerial footage?

I see an immense Giga factory and there is STILL construction happening! This has been ongoing for over 2 years now. I see rows upon rows of stalls for Semi Trucks to back into and deliver materials and parts - over hundreds of these stalls.

I see a parking lot full of cars getting ready to be delivered. I see multiple buildings with roads to Giga Shanghai and roads in between the buildings and special roads with markings that Tesla probably only knows what they mean. I see outside areas of the buildings with workers and supplies.

How big is Giga Shanghai?

Giga Shanghai is about 9.3 million square feet. That's a lot of area! It employees about 2,000 people. Construction began in May, 2018, for 100 million yuan which was wholly owned by Tesla Motors Hong Kong. There is now a giant battery factory being built near Giga Shanghai too!

How many cars will it produce in the future?

The sales volume is said to exceed 400,000 cars in 2021, and reach a 500,000 production capacity in 2022. Of course, these Tesla production numbers in Giga Shanghai could be higher. With Tesla's advancements in manufacturing and technology, I can see Giga Shanghai producing over a million cars a year, especially if the Model 2 comes around and uses a single piece casting.

Will Giga Shanghai produce more than the Model 3 or Model Y?

Right now, Giga Shanghai produces the Tesla Model 3 and Model Y. I think it's very possible Tesla will produce a Chinese version of the CyberTruck here due to there being CyberTruck reservations being accepted in March. There is likely going to be a future "Model 2". After that, it's anybodys guess as to what Tesla will produce here.

I'm humbled and awed by the aerial footage of Giga Shanghai. Tesla has Giga factories in Berlin, Shanghai, Austin (TX), Fremont (CA), and Nevada. Each one of these is huge in scope and I'm excited to see how the existing factories expand and if any new factories are going to be built. I would guess that no new factories will begin construction until Giga Berlin and Giga Austin (TX) are up and running and producing at high volume.

What do you think about the aerial footage of Giga Shanghai? Are the Giga factories a wonder of the world or just simple factories?