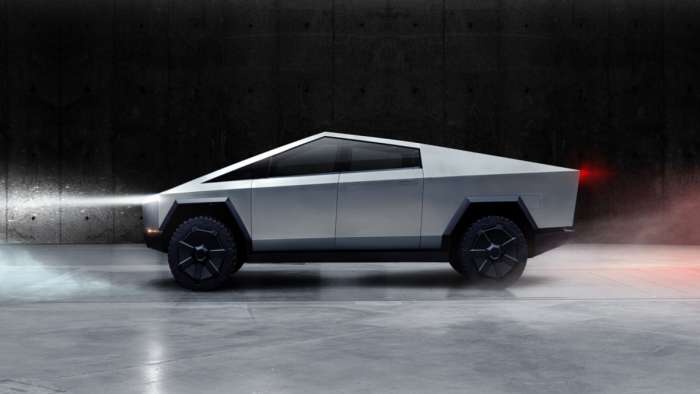 Elon Musk: Tesla Will Show Off Redesigned Cybertruck In A Month, Here Are All The Changes We Know So Far

Tesla CEO Elon Musk in a tweet has said he will reveal the redesigned Cybertruck in a month or so. Here is a look at all the confirmed changes coming to the truck so far.
Advertisement

Tesla CEO Elon Musk says he will reveal redesigned Cybertruck within a month or so. This comes after a tweet asking if Musk could share with us a picture of the new Cybertruck.

Sure, maybe in a month or so

According to Musk, Tesla is doing several but important minor changes to the Cybertruck. This comes after the CEO called off a major redesign of the truck to make it more accessible by shrinking its size. Speaking at Tesla’s Battery Day event Musk said “we are designing the Cybertruck to meet the American spec cause if you tried to design a car to meet the superset of global requirements, basically you can’t make the Cybertruck”

After backing off the redesign Elon Musk said the production Cybertuck will be true to the unveiled alpha prototype. As a result, the size will remain the same with the 6feet full-sized bed and will be able to sit 6 people. As per Musk, this will be mainly for the US market. However, Tesla has been taking reservations for the truck in other counties and recently opened reservations in China.

For the rest of the world, Musk said “We will probably make an international version of the Cybertruck that will be kind of smaller, kind of like a tight wolverine package. It will still be cooler but it will be smaller cause you just can’t make a giant truck like that for most markets.”

As for the changes coming to the US version of the Cybertruck, Elon has said Tesla has improved the visibility of the truck, lowered the window sill, lowered the center line and Musk says overall a lot of minor improvements will come to the truck.

After saying future Cybertruck owners to get different colors they will need to wrap the truck, Elon Musk has opened the possibility of the truck coming in different colors. The Cybertruck being stainless steel can’t be painted like other vehicles but two possibilities Musk has said are, a white oxide color which is a kind of rusting, and also heat treatment to change the color of the stainless steel. Musk says his favorite is blue steel the iconic Zoolander look.

Other things Musk has announced are better air suspension “to kickass in Baja”, which is a Mexican off-road motorsport race held each year on the Baja California Peninsula. The Baja 1000 rally is one of the most prestigious off-road races in the world covering up to 900 miles and attracts competitors from all parts of the globe.

Other changes coming to the Cybertruck will be the addition of some small missing features in the prototype like side-view mirrors, windshield wipers also the Cybertruck had a pretty radical rectangular steering wheel which might or might not make it to the production version. 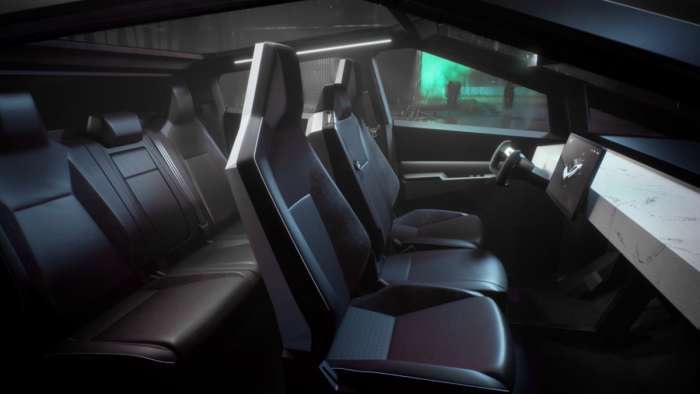 One thing that is not a change but wasn’t shown off on the unveiled prototype of the Cybertruck is solar panels. Musk says the truck will have an option to add 15 miles per day with solar panels fitted to the tonneau cover of the truck bed. However, Musk also says there is a possibility to add a fold-out solar panel which can add 30 to 40 miles a day essentially making the vehicle self-powered.

Speaking at Tesla’s Q3 earnings call Musk has said Tesla plans to deliver a small number of Cybertrucks by end of 2021 with the bulk of the deliveries coming in 2022. Since Cybertruck has several new technologies and manufacturing techniques the CEO has also warned there is a risk of delays.

Currently, Tesla is building the factory for the Cybertruck at its Austin Texas site. This is by far Tesla’s biggest area for a factory with over 2400 acres of land. In comparison, Giga Shanghai is “only” 200acres with less than one-tenth the size.

Tesla plans to manufacture around 250,000 Cybertrucks and there are already over 500,000 reservation holders. According to Musk this is the biggest reservation number for Tesla to date even surpassing Model 3’s over 400,000 number. However, one difference between the two reservations is for the Model 3 Tesla was asking for a $1000 deposit but for the Cybertruck customers only need a refundable $100 deposit.

When it comes to market the Cybertruck will be competing against other full-size trucks like the Ford F150, Ram Pickup, and Chevrolet Silverado which sold 900,000 633,694 and 575,569 trucks respectively. Here is a comparison of the 4 trucks by the automotive veteran Sandy Munro.

Other than the petrol offerings the Cybertruck will also go against other electric truck offerings from the likes of the Rivian R1T, Workhorse, Hummer EV, electric F-150, and most importantly the Nickola Badger (just kidding).

So what do you think? Are you excited about the changes to come to the Cybertruck? What are other ways you think Tesla should update the truck? Let me know your thoughts down in the comments below.

For more information check out: Tesla Might Start Deliveries of Model Y Made In Berlin With 4680 Batteries In Early 2021 Also, see Tesla To Construct 623 Charging Stations Within Giga Berlin

Timothy Parker wrote on November 3, 2020 - 10:24am Permalink
I want the international version with just one row of seats.
p emelda wallen wrote on February 1, 2021 - 9:46pm Permalink
will the international version still have six seats but narrower and a shorter body? also what about the clearance, i hope some models will be lower than 16ins. will it be possible to add those running boards come out and descend when the door is opened?
John E. Ligon wrote on May 19, 2021 - 11:07am Permalink
Move the charge port to behind the rear license plate.