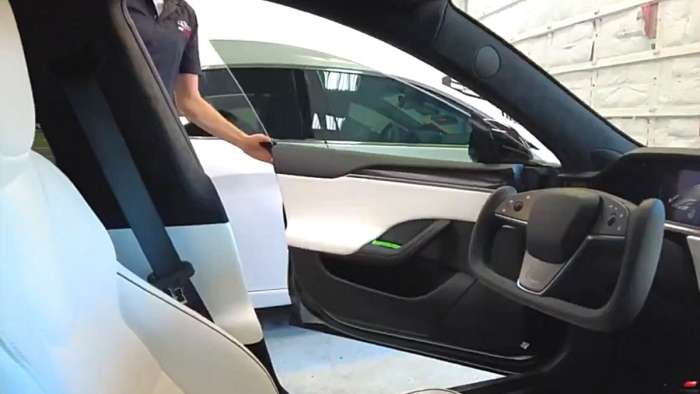 The cabin noise in the new refreshed Tesla Model S is amazing. If you are wondering how is the cabin noise in a new Model S, we are going to find out now and with a new update from Elon Musk about Tesla's new HVAC firmware.
Advertisement

How is the cabin noise in a new Model S? Hear for yourself as the shop noise disappears when the door is closed.
All you hear is the HVAC. @elonmusk pic.twitter.com/3UxYdsQAmK

We can say that whoever Tesla’s noise cancellation engineers are, they did an incredible job on this Model S. “I can’t imagine it getting even better,” wrote one Twitter user. The interior of the new Model S is really quiet, I can’t imagine how it will be with noise canceling!

Also, to be fair, consider this: in this demonstration of the cabin noise in a new Tesla Model S, the vehicle is in idle. When driving the AVAS system should kick in until 20 mph (most probably it will be audible inside) and with the increasing speed tire and other noises will add up. It is not always preferable not to hear any noises at driver loc.

Also, I want to bring another dimension to the idea of too much noise reduction in a car cabin. People are asking on social media, "how would one hear the ambulance or firefighter?" Or, how will the driver hear an incoming car honking? Car cabin noise reduction is a great concept, but probably not the greatest idea if it's brought to minimum.

Thus, as you see it’s great until you don’t hear the fire truck coming down the street behind you. I would like to ask, Elon Musk can the car alert you an emergency service vehicle is around since you can’t hear it?

In his tweet he also tagged Elon Musk, who replied, revealing that the “new HVAC firmware coming soon that will make it quieter.”

Musk also replied saying, “most people have no idea just how good the Tesla air purification system is. Literally 10X better than any other car.” He even went further, giving some possibility to a thought that Tesla one day may start advertising. “Maybe we should advertise informationally just so people know stuff like this exists,” Elon tweeted half-jokingly half serious.