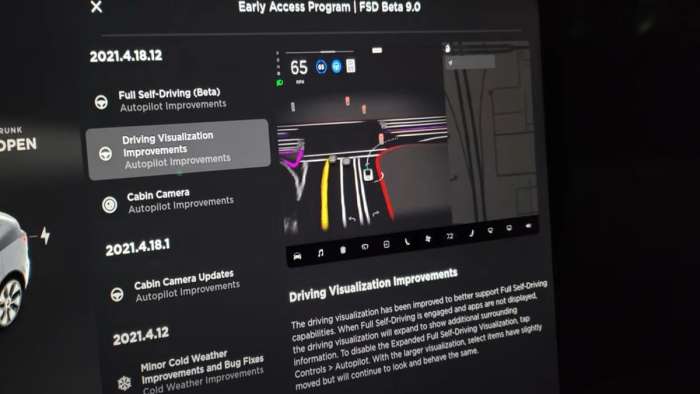 We have breaking news of Tesla's first day of its release of its full self-driving (FSD) version 9 Beta software. It's looking pretty amazing. Let's take a look at the YouTube user, DirtyTesla, and see what his results with it are (from a dark 3:30 AM drive):
Advertisement

The FSD v9 Beta is looking very smooth and impressive. The car seems to react more quickly in real time and it is going to be exciting to see other users use this over time and see what improvements get made to the software to make it even better as times goes on.

Let's take a look at some of the information on the Tesla Dashboard and then we'll follow the Tesla FSD v9 Beta adventure of the YouTube user, DirtyTesla.

From the Tesla Dashboard:

"Full Self-Driving is in early limited access Beta and must be used with additional caution. It may do the wrong thing at the worst time, so you must always keep your hands on the wheel and pay extra attention to the road. Do not become complacent. When Full Self-Driving is enabled your vehicle will make lange changes off highway, select forks to follow your navigation route, navigate around other vehicles and objects, and make left and right turns. Use Full Self-Driving in limited Beta only if you will pay constant attention to the road, and be prepared to act immediately, especially around blind corners, crossing intersections, and in narrow driving situations."

From the Tesla Dashboard:

"The cabin camera above your rearview mirror can now determine driver inattentiveness and provide you with audible alerts, to remind you to keep your eyes on the road when Autopilot is engaged. Camera images do not leave the vehicle itself, which means the system cannot save or transmit information unless you enable data sharing. To change your data settings, tap Controls > Safety & Security > Data Sharing on your car's touchscreen."

You still need your hands on the wheel at all times.

Related News: What will FSD need to do to awaken the robotaxi fleet?

It was around 3:30 AM when DirtyTesla began his drive exiting his driveway on a dirt road. On the left was the visualization and on the right was the satellite map view of where he is.

The road was being shown and there was a dirty road round about that the car went around. The road was narrow and grass is on the sides, yet the car was able to stay on the road.

The car left the dirt road to drive on some side streets and crept forward to make its first right turn. The car was very cautious and made the turn. The look of the road is very smooth and bright. It's very clear and easy to see where all the lane lines are and the colors are very distinct.

There was a left turn that the car needed to make and it turned on its signal ahead of time. It crept up to the turn and gave the message that it wanted the driver to make the turn, which DirtyTesla did. It's good that the car put safety first. The car made the turn and it was very smooth and natural. The remaining driving on the side roads was very smooth without any incidents or interventions.

Approaching cars are on the display and show in the visualization. You can see the different car types on the side and the crosswalk displayed on the UI. Some of the road signs show up on the UI, but others were not. The crosswalk visualizations are very nice looking.

There was a no stop sign crosswalk that the car stopped for, which was wrong and was reported to Tesla by DirtyTesla. There is a blinking red light that was stopped at by the car and it didn't drive through it, it stayed stopped. DirtyTesla had to drive through himself. There was a parking lot and the view of the vehicles and markings was very nice and smooth.

The car tried to make a left turn and had an issue, which was taken over by DirtyTesla. It looks like the car was confused by the median in the middle of the road. On another left turn, the car got in the lane, at a stop sign, a little aggressively, but did the left turn without incident. It then did a right turn very smoothly and confidently.

At a dead end from a right turn, the car made the right turn and then approached the dead end and stopped. The car then drove into a dirt parking lot and started driving, going "rogue". But once the car was pointed in the right direction, it was good to go.

The car is very confident when it knows what to do. It drives straight, makes turns, and it is a smooth ride. This is similar to a human driver who knows what to do when driving conditions are well known.

When there are intersections, the car proceeds cautiously which is smart because other vehicles and run red lights and the car needs to be prepared for all situations. The car cautiously went through a blinking yellow light intersection, which most other people do not do.

The most challenging part about getting full self-driving out of beta will be handling all the cases where things aren't as clear and the car has to make decisions, such as construction, median's, odd lane markings, weird lane's, etc.

The main changes found at the end of this video are:

Looking forward to more videos and progress being made!