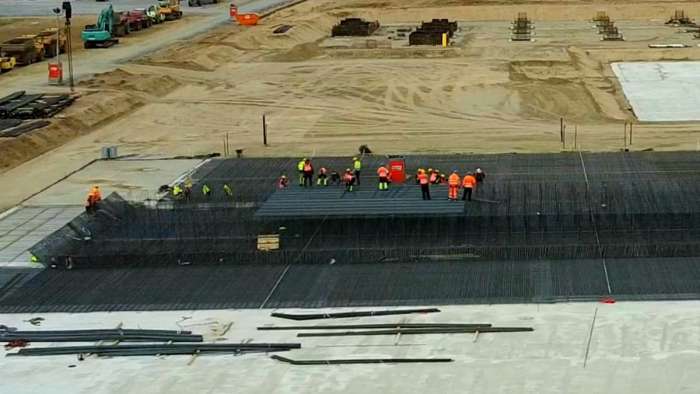 Tesla has begun foundational work at the future Giga Berlin Battery site. The complexity of the foundational mesh suggests the area will be house to truly gigantic battery manufacturing pieces of machinery.
Advertisement

In addition to a state-of-the-art car factory, Tesla is also building the world’s biggest battery factory in Grunheide Germany. This battery factory, just in its initial phase, is expected to produce 100GWh of battery cells per year.

Cathie Wood and her firm ARK Invest, which are long-term bullish investors in Tesla believe the EV maker will produce 5 to 10 million vehicles a year by 2025.

And now a new video by our friend Yurgen who goes by the Twitter handle @GF4Tesla shows us the initial frame of the battery plant starting to rise from the ground.

Really gigantic steel mesh for a large foundation plate is being built for the #batteryfactory.

Tesla began ground preparation at the current battery factory site a few weeks back however, this is the first time any visible structure is taking shape.

As you can see from the video above, Tesla is installing steel meshes to support the base of the future battery factory. And the complexity of the foundational work suggests truly gigantic machinery will be installed at the site.

Tesla, at the battery day presentation, showed off battery cell chemistry, design, and manufacturing breakthroughs which will be first rolled out in scale at the Grundhide Battery Plant.

Related news: The G Force You Can Expect From A SpaceX Package Roadster

During that presentation, Tesla emphasized fully autonomous systems supported by gigantic machineries such as ones that will be used to do dry electrode coating and test cell viability.

These are multi-story tall equipment that will undoubtedly weigh several tonnes and it’s inspiring to see initial work in what will be the largest and possibly most important battery plant in the world.

Currently, Tesla hasn’t provided a timeline as to when we should expect this battery factory to be operational. As a matter of fact, besides information gathered from regional authorities, Tesla hasn't even confirmed it is in the process of building a battery plant.

According to reports coming out of Germany, the addition of a battery plant to the Giga Berlin plans will add a few months to the permitting process. It’s not yet clear whether this will delay initial vehicle production especially since Elon Musk is emphasizing that Giga Berlin suppliers speed up their process.

According to Brandenburg state PM Dietmar Woidke "the application, which Tesla will soon submit to change/expand to include the construction of a battery factory - is positive news for the country,"

"If this additional investment now flows into the permit application, it goes without saying that the application documents must be revised, and then the approval authorities have the last word," said Woidke, suggesting this could be a cause for delay.

So what do you think? Have you ever seen this complex groundwork at any of Tesla’s other construction sites? Do you think this is meant to support huge battery production machinery? Let me know your thoughts down in the comments below.

For more information check out: Tesla Gets Approval To Use This Helicopter At Giga Berlin Also, see Tesla Provides a New Cybertruck Update with Delivery Timeframe to Some Reservation Holders