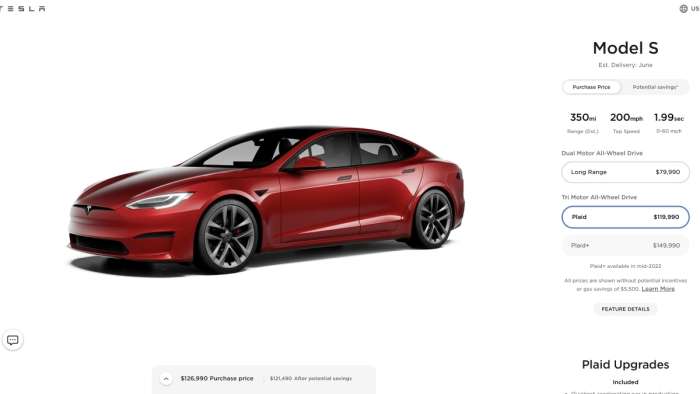 Tesla in an update to the company's online configurator has removed the Plaid Plus variant of the Model S from the order page.
Advertisement

Speaking at Tesla’s Battery Day event back in September 2020, Elon Musk said the Plaid Model S (later renamed “Plaid Plus” Model S) will begin deliveries by the end of 2021.

However, in the following months, Tesla drastically changed their plan and introduced the groundbreaking but comparatively more “restrained” Plaid Model S in lieu of the Plaid Plus variant.

The Plaid Model S deliveries were slated to begin by the end of March however, due to the chip shortage that has hit the entire automotive market deliveries have yet to begin.

Although yesterday CEO Elon Musk announced on Twitter first deliveries of the Plaid Model S will begin on June 3 with a delivery event at Tesla’s Fremont California factory.

Related news: Elon Musk Updates On Hydrogen Energy With Most Compelling Use

And now with an update to the company’s online configurator early this morning Tesla has grayed out the Plaid Plus Model S option and can no longer be selected from the Model S order page.

This leaves the Long Range and Plaid variants of the Model S as the only two options for anyone looking to purchase Tesla’s high-end sedan.

Like usual Tesla hasn’t said why the company has halted new Plaid Plus Model S orders, however, it is likely the EV maker made the changes due to a mix of high demand and production delays.

When announcing the Plaid Model S back in March, Tesla reiterated the Plaid Plus variant will come by the end of 2021. However, later on, Elon Musk went on the Joe Rogan podcast and said the Plaid Plus will start production in the middle of 2022.

This is a good sign pointing to Tesla’s demand being strong, however, it’s nonetheless disheartening for anyone excited to be behind the yoke steering wheel of the Plaid Plus Model S.

So what do you think? Did Tesla halt Plaid Model S order due to high demand? or do you think production difficulties are the reason for the change? Let me know your thoughts down in the comments below.

For more information check out: Elon Musk Says Tesla Will Update Production Roadster Design, 1.1 Sec 0-60 With SpaceX Package Also, see Tesla Gets Approval To Use This Helicopter At Giga Berlin

DeanMcManis wrote on May 21, 2021 - 5:51pm Permalink
To me, this is bad news. And I think that it is not related to high Model S demand, but is about low 4680 battery supply. I think that Elon Musk believed that the Kato rd battery factory was going to scale up production last year. Providing enough 4680 batteries for the Tesla Semi, Roadster, and Model S and X Plaid vehicles. And at the same time Giga Nevada would scale up their own 4680 battery production, as well as new 4680 factories in Texas and Berlin for the Model Y and others to follow. But 4680 battery production didn't ramp up as planned, and Tesla put the Roadster, and Semi on the back burner, while developing the regular versions of the tri-motor Plaid Model S and Model X using the older 18650 batteries, and announcing the Plaid Plus as the Roadster placeholder, and then later pushing it out to next year. Then there have been delays in the regular Model S Plaid until June, and the Plaid Plus drops off the order webpage. I think that Tesla decided to shift all 4680 battery production to the Model Y, both in Germany and coming to Texas later this year. With so much press attention about the new model delays, I don't think that Tesla wanted to officially delay the Model S Plaid Plus again until the end of this year, when it was due at the end of last year. I think that Tesla did not want Lucid Motors to steal the headlines on having the quickest EV with the longest range. But Lucid's ship day has also slipped for it's Dream Air model, and the regular Plaid Model S will still be quicker, although without the top rung beating 500 mile+ range. And Tesla will follow up with the Model X Plaid which will be quicker than the fastest European big crossovers. Without needing to use the 4680 batteries. The good news is that Tesla will still be visibly ahead of their competition in technology and capability, just not the usual 2-3 years ahead that they have enjoyed for years now.
Jonathon Whaley wrote on June 16, 2021 - 12:19pm Permalink
I paid the deposit for the Plaid Plus back in March 2021. UK delivery was expected 'early/mid 2022' Now the Plaid has been cancelled, I'm not going to change my S100DL until there is a 520+ mile range Tesla. I would imagine that very few of the Plaid Plus orders will translate in to lower spec Tesla vehicles.