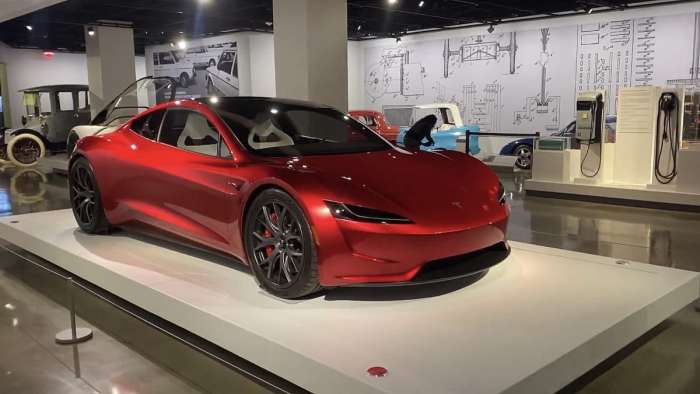 Elon Musk says the production version of the Tesla Roadster will get a design overhaul. A plaque at the Peterson Automotive Museum also suggests the Roadster with the SpaceX package will have a 1.1 second 0 to 60 time.
Advertisement

Tesla announced the second generation Roadster back in 2017. Originally the car was expected to be delivered in 2020 however, after several delays the vehicle is now expected to come out in 2022.

And given the extra time Tesla got to perfect the Roadster, the EV maker is working on improving the design of the vehicle.

Responding to a tweet captioning the Roadster at the Petersen Automotive Museum, where it is currently on display, Musk said the production version will look different.

Musk did not elaborate in what ways the design of the vehicle will change besides saying it will be better. The 2nd generation Roadster is already one of the most gorgeous vehicles and it’s hard to imagine the vehicle looking even better.

On top of Musk giving us more tidbits, Tesla’s Roadster display at the Petersen Automotive Museum also revealed never before shared information regarding the spec of the SpaceX Package Roadster.

According to the plaque giving a small description of the vehicle, it reads “Demonstrating the versatility of electric power and adding extra distinction to the car’s already high performance, an announced SpaceX package would outfit the Roadster with cold air rocket thrusters positioned at the rear, allowing for a 0-to-60-mph acceleration time of 1.1 seconds”

That is almost a 40% improvement as compared to the 2nd fastest vehicle in the world. And this might as well be the largest 0 to 60-time improvement in the last 50 years of the automotive world.

Related news: Range Anxiety Plagues F-150 Lightning, BMW Has Solved That In The i3

On top of the mind-boggling 0 to 60 numbers, the Roadster is expected to do the quarter-mile in under 9 seconds and be able to go flat out over 250 miles per hour.

Previously, Elon Musk has said the Roadster version, with SpaceX package, will be able to fly. Or at least hover and move back and forth for a little while.

The way Tesla plans to do this is by outfitting the vehicle with a cold thrust rocket. The way it works is the vehicle will be fitted with two composite overwrapped pressure vessels (COPVs) in lieu of the backseat.

And the COPVs will then be fed air from the atmosphere using a compressor. The COPVs that will go into the Roadster are the same ones that go into SpaceX rockets.

The COPVs are made from carbon fiber and can withstand an incredible amount of pressure. Once the air is compressed, it will then be released in a controlled manner allowing the vehicle to hover above the ground.

Tesla plans to outfit the vehicle with valves all around the vehicle enabling the Roadster to move horizontal to the ground in mid-air.

Tesla also plans to outfit the valves at the back, sides, and front of the vehicle to aid in acceleration, braking, and handling.

On top of all the incredible things coming with the Roadster, Tesla also plans to equip the vehicle with doors that open with a swipe of a finger. Below is a small demonstration of how the door handles will work.

Self opening by a button like the roadster? pic.twitter.com/XWYFB4OTEG

With the SpaceX package, the ability to hover, and the incredible performance numbers, the Roadster is on its way to becoming the best vehicle in the world.

So what do you think? Are you excited about the SpaceX Roadster package? Also, what do you like to see on the redesign? Let me know your thoughts down in the comments below.

For more information check out: Watch a Tesla Drive Itself Through Traffic Highlighting Autopilot and FSD Features Also, see Tesla Owner Tells How His Model 3 Disobeyed Him, Saving His Life