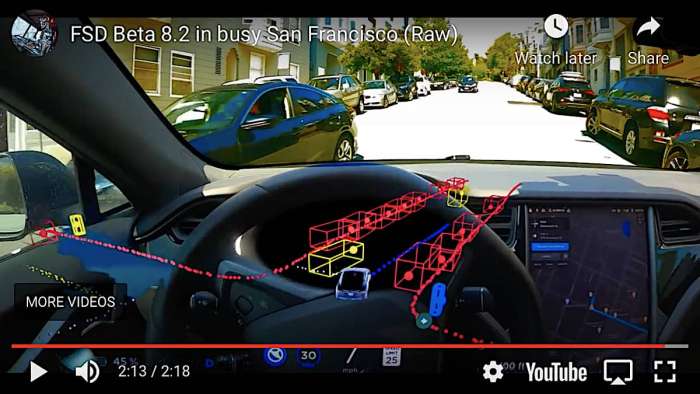 Here is a very recent video from r/teslamotors that demonstrates how Tesla’s FSD Beta 8.2 performs in busy San Francisco traffic under close quarter conditions that raises some interesting questions from reddit readers about how Tesla FSD would perform in countries other than the U.S.; and, poses what might be the biggest Tesla FSD question we should be asking.
Advertisement

Earlier last week I posted a video showing Tesla’s FSD in action going through a relatively urban street setting. This week a reddit posting from r/teslamotors provides us with a more recent video that demonstrates the prowess of FSD Beta 8.2 as it maneuvers successfully through some busy San Franciscan streets.

Here is the New Video

The significance of this is that it is not just another Tesla FSD video. Rather, that it demonstrates just how sophisticated FSD has become as shown in this reddit/You Tube video where some very close quarters real-life driving scenarios are met with changing oncoming traffic as the FSD senses and decides when it is safe to pass a parked vehicle within narrow roadway confines.

I have to confess that what impressed me the most is that FSD has more patience than I do with pedestrians who meander distractedly their way through crosswalks. That, and just watching the display took me back to some fond memories of playing “Battle Zone” tank arcade games back in the 80s.

Aside from my positive views of watching FSD tech in action that I could relate to with the difficulties of driving in city traffic, comments from reddit readers posed some interesting questions and points. In particular, how would FSD (or can FSD) handle non-American road rules and conditions? For example:

1. What about narrow roads that are single-lane 2-way conditions?

2. How about bridges without traffic lights at its ends that depend on a first-come, first-cross decision making process involving human perspectives on who was first?

3. Driving in India, Thailand, Vietnam, etc.?! Been there and done that, and you will never be the same again.

4. What happens during a traffic jam or when traffic stops for emergency vehicles?

5. Is there a road rage mode? (Avoiding that is, not initiating.)

6. What happens when a South American armored Tesla is accosted by would-be kidnappers?

While the reddit comments about the video were entertaining as well as thought-provoking, I have yet to hear what I would consider to be the biggest Tesla FSD question: How well does the latest version of FSD perform under nighttime conditions?

Here’s the latest from #Tesla in a newsletter with a must-see video demonstrating a Tesla driving itself through traffic with Autopilot and FSD features to be released soon and available to Tesla drivers.
-https://t.co/ra0PC416cn
-#TeslaFSD @WholeMarsBlog @ray4tesla @klwtts pic.twitter.com/WtTvWxQB5L

I foresee that with older drivers who own a Tesla and buy into the FSD upgrade, is the potential usefulness for nighttime driving. Older eyesight means added difficulty with nighttime driving. Plus, being an older driver means no longer being able to physically handle those overnight cross-country road trips we did during our younger years.

Which begs another question: If we are seeing Tesla owners deciding to drive on Autopilot with FSD from the backseat, how can we not expect that some drivers will try to sleep through their Autopilot cross-country journey---intentionally or not?!

If you know something about how well (or not) the current FSD operates under nighttime conditions; or, just want to share your thoughts on what you consider to be the biggest question about Tesla and FSD, please respond in the comments section below.