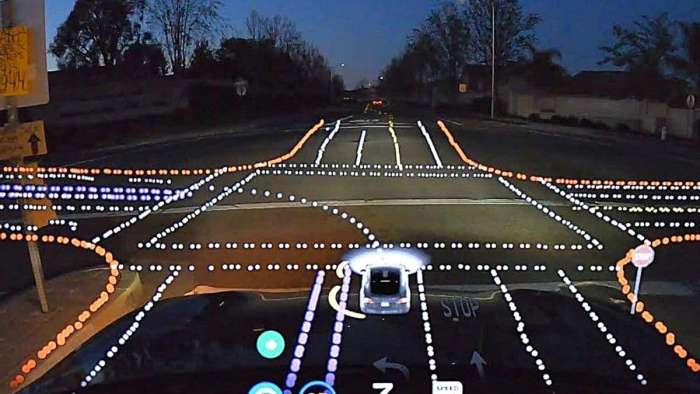 Yesterday I reported on Torque News Youtube Channel that Tesla's new FSD Beta V9.0 will be mind blowing and the software's update is coming in two weeks. Last night CEO Elon Musk made another reference to a human mind saying Tesla's Full Self-Driving software update (the V9.0) will have "true mind's eye," and show actual probability distribution of objects. Let's take a look at what this means.
Advertisement

First, Musk tweeted and said, "FSD display V9.0 will show actual probability distribution of objects – true mind’s eye of the neural net. This is so cool!"

One question I have about this type of full self-driving vision is how to keep cameras free of debris such as dirt, mud, snow and etc. Any idea on this?

If you remember one of my previous FSD videos, you probably remember Tesla FSD stopping and passing a trash pickup truck. I was very surprised when the Model Y screen displayed trash cans on the road! It was trash pickup day on that street! Incredible software and kudos to those genius who wrote the codes! I was 100% relaxed driving past! This is some great achievement Elon Musk and awesome team work.

I am thinking that FSD will be definitely the biggest contribution to the transport safety, bigger than Airbags and seat belts combined.

Some people have argued about radar vision vs pure human vision when it comes to Tesla FSD. I think a radar can only add confirming information or contradicting information. Which one are you going to believe if its contradicting? If vision is above a certain level, radar adds nothing.

A big challenge Tesla's software team needs to tackle is understanding the hand signals, if they want to bring Tesla FSD to Level 5 Autonomy. A full Level 5 Autonomy will need to understand hand signals from a person standing in the road. That may be the police, emergency worker or just someone warning of an accident up ahead. It will have to be aware of emergency vehicles that may not visible but have their siren on.

Currently Tesla is worth about $690 billion. But it's not Tesla’s vehicles that are valued at $690 billion. It’s Tesla’s software. "Software flows through every part of an electric vehicle. The way it feels to drive, the range, the charging experience… not just autonomy and what you see on the touchscreen," rightfully comments Whole Mars Catalog on Twitter.

Tesla continues to work on perfecting its future autonomous driving system in its cars, known as Full Self Driving (FSD), although the person responsible for any action remains the driver himself.

In recent months we have seen how Tesla has been releasing the advances made in this field and the videos published by various users through social networks left us surprised by how well the system worked.

Now, Elon Musk has announced that in about two weeks Tesla will launch a new update to Full Self Driving with important improvements and new functionalities that will leave people speechless by all that the system is capable of doing with the liberalization of these functions.

The new Full Self Driving beta will be a further step towards autonomous driving for Tesla, betting on using only the cameras installed in their cars to interpret the exterior and make the best decision instead of using the camera + radar tandem as it currently does.

At Torque News we will be very attentive to any new developments in this regard, as everything indicates that it will be a great step for the autonomous driving technology of the future. Please, follow us on Twitter at @TorqueNewsAuto to stay in touch and not miss our daily Tweets on Tesla.