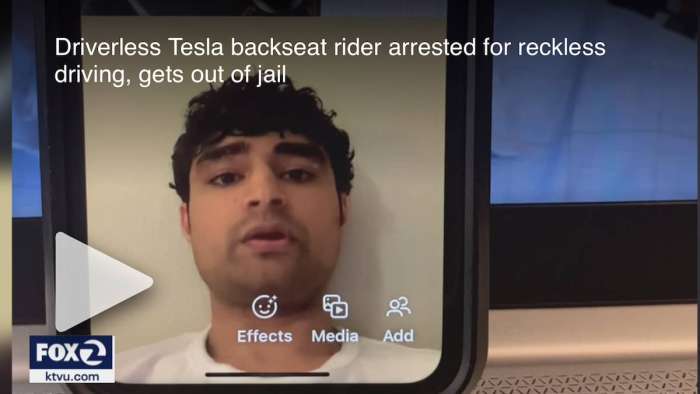 Backseat Autopilot Driving a Tesla Means a Night in Jail

This week, one Tesla owner found out that backseat autopilot driving a Tesla means a night in jail; and, that he could lose his driver’s license. We would like to hear what the Tesla community thinks of the driver’s actions and what the courts should do about it.
Advertisement

According to Fox News station KTVU in Oakland California, 25-year old Param Sharma was arrested last Monday night for two counts of reckless driving and disobeying a peace officer after spotted driving on autopilot from the backseat of his Tesla. On Tuesday, he was released pending a court date on July 6th to determine what legal action(s) will be taken against him for violating California laws prohibiting driving while not physically behind the wheel.

The news reports that Sharma was traveling eastbound on I-80 across the San Francisco-Oakland Bay Bridge toward Oakland, where California Highway Patrol investigators said the driverless Tesla was navigating through medium to heavy traffic at the time of his arrest.

Currently, Tesla is continuing with the development and tweaking of its autonomous driving system known as Full Self Driving (FSD). The legal ramifications of this and the arrest, is the distinction between true autonomous driving and that which is described as advanced driver-assistance system, or ADAS while operating under SAE (Society of Automotive Engineers) Level 2 conditions. The classification requires that a human driver must be ready to take the wheel at all times.

Reportedly, Sharma argues that he is not in violation because his long arms makes him capable of taking control of the wheel from the back seat should the need arise.

Sharma claims that his actions in his Tesla are not to show off, but to show that self-driving vehicles are not only the future, but the present as well.

Here is a Fox News YouTube Video of the Story

How Many Other Param Sharmas Are There Out On The Road?

From the news reports about Sharma’s arrest and release, it appears that Sharma will continue with his backseat autopilot driving in spite of safety experts pointing out that his actions are clearly unsafe and an accident waiting to happen (pun intended). It’s not a matter of “if” but “when” that demonstrates his intentions of further reckless endangerment whether he is willing to recognize or not that autopilot driving is not yet perfected.

The cause for concern here is not just one person doing this, but it is very likely there are quite a few---some of whom may be operating unseen behind tinted glass. Which begs the question, where is Tesla’s voice on this issue? Perhaps it seems to be a no-brainer, but Elon needs to respond.

Here is one response on Twitter in response to the news:

I think it will be great if @Tesla disables Autopilot for those who misuse them. @elonmusk any thoughts?

If there is a need for further convincing of the seriousness of the matter, here is an informative article by Torque News writer John Goreham on “How Many Tesla Autopilot Deaths Would Have Occurred If Every Car In America Had Autopilot?”

John Walker wrote on May 12, 2021 - 3:57pm Permalink
Everyone knows that Tesla’s have autopilot and that you’re still supposed to maintain control of the car. So what are you trying to prove by driving from the back seat? Yes we know it can be done and great if that is how you want to kill yourself, but you’re endangering every other person on the road and that is not okay. If you keep doing it you should lose your driving privileges for life.
Timothy Boyer wrote on May 12, 2021 - 4:37pm Permalink
I agree. But the question I have is why do we have to wait until someone dies? This guy clearly stated that he intends on continuing to break the law and will not change his behavior. A blatant disregard for others' lives seems premeditated to me.
DeanMcManis wrote on May 14, 2021 - 12:42am Permalink
Tesla needs to step in and lock out known illegal Autopilot abusing drivers by simply tightening their controls that allow holes in their safety systems to be exploited. They are already doing this now. Tesla is trying to downplay the video surveillance inside the car. But they did announce their new millimeter wave sensor that accurately tracks body position, plus they just patented a smart seatbelt sensor that can tell if someone is trying to get around proper safety belt use. Outside of Tesla avoiding bad press now, these driver tracking technologies will become a cornerstone of the baseline system that is necessary for Tesla's future RoboTaxi services. One point of consideration is that even though these unsafe moves are being claimed to be done by Tesla fans promoting FSD, the real source is more likely short sellers trying to profit from Tesla stock value being hit by the bad press that these stories generate. The internet still rewards idiots doing stupid and unsafe actions online through profitable Darwin Rewards.
Timothy Boyer wrote on May 14, 2021 - 8:13am Permalink
Stock manipulation?! Bad behavior seems to be rewarded more than punished...sigh. But you've made some excellent points to consider. I love the Darwin Awards. My favorite was these guys at a party with blasting caps trying to pop them in a fish tank of water using wires and a battery. When it didn't work, one brainiac said "Watch this!" placing a blasting cap between his teeth and applying the battery to it. He survived (so he was a contender) but lost his front teeth and lips!