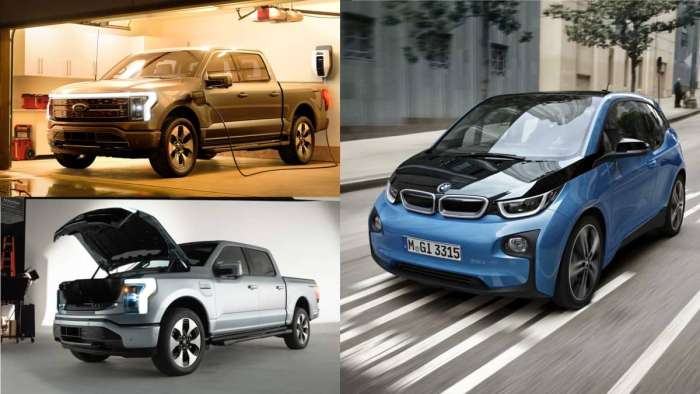 Range Anxiety Plagues F-150 Lightning, BMW Has Solved That In The i3

Yesterday, Ford unveiled their entry into the EV Truck market, the F-150 Lightning. Many fans were less than enthusiastic about the reported 300 mile range, but in 2014 BMW gave us something that eases those worries substantially; a petrol fueled Range Extender. See the i3 for example! In 2014, it won Green Car of The Year.
Advertisement

The BMW i3 isn’t the fastest hatchback you can buy. It isn’t the most luxurious electric vehicle on the planet. It is a little commuter vehicle that is environmentally friendly and maintains a vague BMW aesthetic that some drivers may want. The i3 isn’t really the ‘best’ at any of what it does. It’s clean looking lines and unique profile make it stand out visually, and there’s always a degree of prestige that comes with driving a Bimmer, but the i3 itself is not particularly exciting. 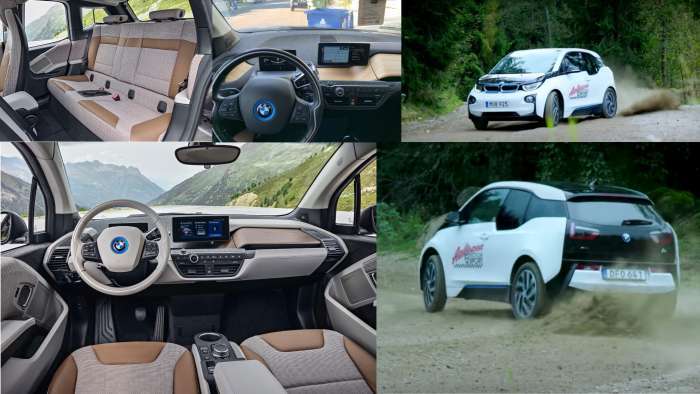 I am enamored with its olive-tanned leather and Hemp-plastic interior. I think it looks fetching and the environmentally conscious materials speak to the tree-hugger in me. The interior is graced with a wide-screen display that is big enough to work with, but not so large as to be imposing or distracting. The driver’s Heads-Up Display is another screen with easy to read and comprehend information. With just enough wood to imply luxury without going overboard, I honestly feel it’s one of the best interiors I’ve seen in a vehicle that doesn’t have 3 pedals.

The i3 is rear wheel drive, something that I truly appreciate, and despite it’s single gear ratio, it’s not entirely slow; capable of achieving 0-60 miles per hour in about 7 seconds. Watching an experienced rally driver take an i3 around a dirt track, drifting and sliding all over the place, was something that I didn’t expect to experience this today, but we can see him having quite a bit of fun, here:

What really makes the i3 cool, in my opinion, is that it uses an entirely electric drivetrain but has an optional gas-powered range extender that achieves near-zero emissions. This range extender is a very small generator that isn’t intended to keep the car running for long periods, but rather to just help provide peace of mind in case the next charging station is a little further away than originally anticipated. The range extender is just there like your spare tire, or a fix-a-flat; it's just for your battery instead.

In its current iteration, the BMW i3’s range extender is a very small 0.647 Liter two-cylinder engine. This little powerplant only puts out about 34 horsepower, so it’s not very quick at charging the i3, but again it's not meant to drive long term off of, but instead just to get you to the next charging station. As electric charging station infrastructure gets more prevalent, range extenders will be less useful, but for folks that don’t life in a city or the suburbs, it does provide a little more comfort.

Changes in ICE technology could even provide a very sweet aftermarket of range-extenders if the manufacturer doesn’t want to include one with the vehicle. There’s an American company right now that is producing a rotary engine the size of a grapefruit that makes around 5 horsepower and has near zero emissions. Liquid Piston expects to be able to scale this motor up to be practical for vehicle applications and I’d be interested to see what they might put together to fit inside the Ford F-150 Lightning’s ‘frunk’.

Another manufacturer that you’ve heard me bring up before is MayMaan, a company out of Miami, FL that’s working on producing alcohol powered ICE engines. I’d note that if MayMaan were to create a small generator to fit as a range extender in vehicles like Porsche’s Taycan, or upcoming eMacan, or even a Tesla Cybertruck, drivers would be able to (in America) get a license to produce their own fuel using food waste at home. All they’d need is a still and some knowhow.

Most EV drivers don’t worry about the range. They fill up when and where they get the chance, and find that even with the limited infrastructure that’s there, it’s not impossible or even particularly difficult. Folks in rural areas may experience difficulty, and that’s where a range extender would really shine.

I’ve complained that there doesn’t appear to be much of an aftermarket for EVs, but maybe we’ll see some new range extenders coming out for civilian use. I love the BMW i3 because it uses a small gas generator rather than including a heavy transmission to push power to the wheels with both the gas motor and the electric motor simultaneously. It is a simple and elegant solution to range anxiety problems and if companies like Liquid Piston or MayMaan will produce aftermarket range-extenders, I think it can only help reduce emissions and increase electric vehicle sales.

Rus wrote on May 21, 2021 - 6:01pm Permalink
This combo of ell electric plus a small ICE is what I consider the best compromise.If the user can pick the size of the ICE even better. We drover a Prius Gen 2 for 140K before the engine and A/C started acting up. 44MPG lifetime.
Matt R wrote on May 30, 2021 - 1:58am Permalink
That is what I call "drinking the Kool-Aid" for sure! The i3 RE had a tiny tank. Using a BMW 650 motor cycle engine as a range extender sounded like a good idea. The take rate was so low they took it behind the shed and put it down. If they'd taken that space for more battery, they would have had more range!