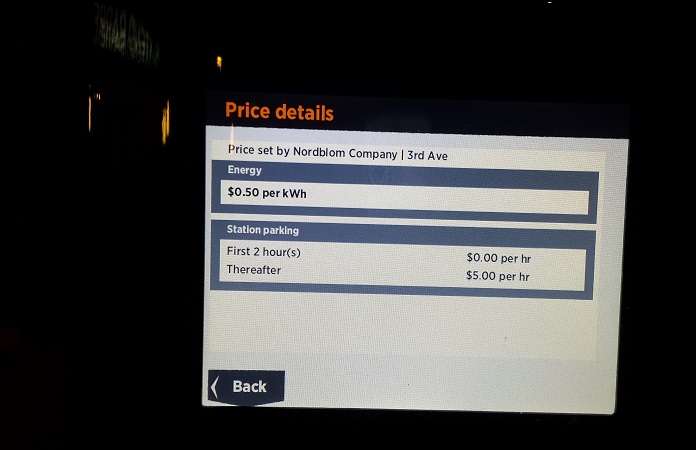 At some locations, electric car charging fees are already relatively expensive. Will this trend grow?
Advertisement

During our testing of the new 2018 Hyundai Ioniq Electric in Massachusetts this week, we used the infotainment system to find a nearby charging station. The vehicle directed us to a new outdoor mall area in Burlington, Mass. and we made a dinner reservation for a restaurant in the plaza. When we arrived, the single charging spot, among hundreds of public spots, was occupied by a Toyota Prius Prime. When we left over two hours later, it was still in the spot charging, even though it must have been full, given its small battery capacity. That was an interesting real-world observation for our review notes, but what struck us was the cost displayed on the charger. Fifty cents per kWh.

We've pointed out in prior stories that here in Massachusetts where electricity can be as high as twenty-three cents per kWh at home, an EV has about the same cost per mile as a Prius, or Camry Hybrid when gasoline is under $2.50 per gallon. When electricity is twice that rate, an EV costs more per mile to operate than a typical car like a Civic or crossover like a CR-V.

In many locations, public charging costs are covered by a local municipality, business, or private group and are offered for "free." The cost to charge is still there, but someone besides the car owner is paying the tab. With single chargers or a pair of chargers being used sporadically, this is an easy expense for a group with good intentions to absorb. The real question is, as EVs become more and more mainstream, will this continue, or will public EV chargers shift to a break-even price structure, and eventually, like most things, a profit center? With big oil buying up public charging companies the answer is easy to guess.

Parks McCants wrote on October 26, 2017 - 8:10pm Permalink
I too have an Ionic on test this week in Oregon. I like the car, but finding a charger can at times be problematic. Unfortunately, charging the Ionic on house current is snails-pace slow, or, there's a problem with the provided charge controller. After charging Ionic overnight on 110V A,C., I'd raised the charge level from 25 to 60%. Here's the good news: When operating Ionic in economy mode, stated range was effectively doubled due to exceptional re gen-braking and deceleration. The key to EV mass market acceptance is an affordable, effective stage-2 at home charger. I'll keep you posted. I love driving the thing.
John Goreham wrote on October 27, 2017 - 9:27am Permalink
You bring up an excellent point that many EV advocates forget to mention - home charging setups are not cheap. I was putting back about 7 miles per hour using the 115 Volt charger. A higher amperage, higher voltage setup would be a must for anyone trying to make the most of the Ioniq.
arthur4563 wrote on November 1, 2017 - 7:54pm Permalink
Profits are determined by the level of competition. This is why oil companies have such a small profit margin - internse competition, with little ability to gain any advanatge due to location - there is a gas station on every corner. Electric cars, especially those produced by Tesla Motors, have a profit margin far higher than anything any oil company ever made. And prices at public chargers (FAst chargers - Level 2 chargers are NOT the future) do NOT collect road taxes as the oil companies do - electric car owners are not paying their fair share of road taxes, except in a few states. They also receive massive govt subsidies that are a waste of money at this point. We are very fortunate that the oil companies (Royal Dutch Shell for one) have begun buying up charging companies , an event I predicted years ago. Gas stations are the ideal spots for DC fast chargers. They have the right locations, and plenty of them - they already own the property and have amenities for customers, something Elon Musk foolishly made a big deal about a month ago - snacks and beverages at his Supercharger stations, something that 's been around for longer than Musk has been alive. This country is probably going to need between 3 and 6 million electric chargers and the only place to put them that makes economic and convenient sense are in gas stations. This also ensures strong competition, just as we have seen from gasoline stations and strong competition means the lowest profitable prices. NOT Tesla Motor prices, which charge $9,000 for a Model 3 battery upgrade, which actually consists of stuffing another $3500 worth of battery cells into the pack.
Charlotte Omoto wrote on November 4, 2017 - 1:16pm Permalink
One great advantage of EVs is that you don't have to go to a smelly gas station to fill up. It is not that expensive to put in Level 2 chargers at home, and the convenience of being fully charged every morning outweighs the cost. There are number of public chargers in my area that are free and available 24/7. I did one time charge up at a ridiculous cost, but never again. With more chargers becoming available, even in my rural area, I don't think those chargers that cost a lot will get many customers.