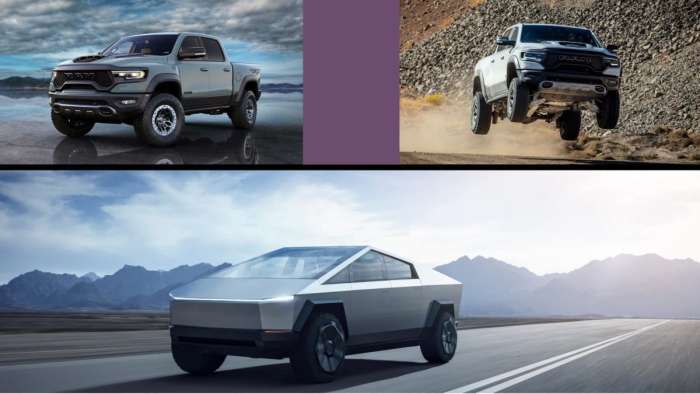 TRX Vs Cybertruck: Can The Electric Newcomer Beat The King Of Beastly Trucks?

Tesla and its eclectic founder, Elon Musk, have decided to enter a truck into the Electric Vehicle market. This truck, the Cybertruck, is expected to be powerful, rugged, and nigh indestructible. It’s had its share of setbacks on the road to release, including some bad press and the recent chip shortage has not helped get the Cybertruck into our driveways.
Advertisement

Tesla seems to be dead-set on making the most of these setbacks as recently, Youtuber Gabeincal managed to catch a glimpse of what appears to be a Ram TRX pickup at Tesla’s Fremont facilities.

One could argue that the TRX is one of the most capable trucks of the current generation. It is powered by a 702 horsepower, 6.2 Liter displacement V8. It has a towing capacity of 8100 pounds and it runs a 0-60 in 3.7 seconds, according to the folks over at CarAndDriver.com, a rather impressive little sprint, for any vehicle, but especially for a truck. The immense truck is powered by the Hellcat engine that we see so frequently in the Challenger and Charger, the two cars I write about most frequently. We’ve seen Hellcats stuffed into other vehicles, like the Durango and even a Wrangler, though the Wrangler is not offered that way from the factory, and we definitely know that All-Wheel-Drive systems do a great job of translating the power that the Hellcat is capable of to the road, so it’s no surprise that the TRX is one heck of a truck. 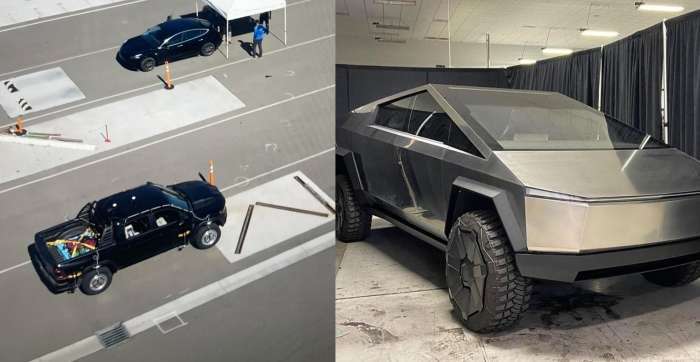 If it is a TRX that Tesla is trying to test against, I’d say that it’s a good option. It’s giving them a good performance vehicle to compete with. The Ford Raptor would have been a great option, too but it’s less powerful, so the TRX gets to be the truck tested.

I look for different things in a truck than the 0-60. The towing capacity, reliability, and ability to survive job site conditions are much more important than the speed because to me, a truck isn’t meant to go fast, it’s meant to survive. I am all about the utility of something like the M35A2 “Deuce And A Half,” a military vehicle that has seen service on nearly every continent because of its survivability. It isn’t fast. It isn’t pretty, but it can run on anything from alcohol to used motor oil, and it’s pretty easy to work on. The Hellcat, as much as I love the engine, isn’t a good fit for off road capability. It’s complex and that complexity can lead to extra points of failure.The reason that the M35A2 is such a great truck is that it’s systems are very simple. It’s simple to replace broken parts and in times of hardship, many of the parts can even be manufactured using fairly basic tools.

I don’t think we’ll ever see a Ram TRX pickup in military use because of its complexity. Regardless of its price point, it simply isn’t rugged enough that it won’t need fixing eventually, and when it needs fixing, it’s going to be expensive to fix. The Bugatti Veyron costs $25,000 to get an oil change. It’s ridiculous. The Ram 1500, which the TRX is based off of is much more reasonable at around $130, and I’d assume, seeing as how a Hellcat powered challenger’s oil and filter change isn’t much worse, the TRX is probably about the same. An electric vehicle is typically cheaper to repair than a gas one because the moving parts of them are much older technology. That’s right. Electric motors were invented in 1828 as opposed to the internal combustion engine in the 1860 s.

An electric motor consists of coils and magnet and has relatively few moving parts compared to all of the pistons and camshafts and rockers and springs that that make up a gas motor. The biggest thing that has prevented electric vehicles from taking over sooner comes entirely from humanity’s inability to store energy efficiently. Batteries are the biggest factor because they are heavy. For the longest time, a Liter of gasoline has had more stored energy than a comparable volume of battery, and still, electric cars take much longer to charge than it takes to fill up a gas tank. In the most recent years, we are seeing more charging lots popping up, and batteries are holding more and more energy, making the car more capable of driving further from home, but trucks, being about utility, need to be able to not just make it into the wilderness, but to survive the trek out into it to come back. The Cybertruck has its work cut out for it if it wants to get any military contracts, and the TRX is not the truck to compare it to to earn them, but the TRX is going to be a great comparison for the civilian market, where the ridiculous speed of the TRX will be used (probably to embarrass sports cars that don’t have quite the grip to use all the ponies that Hellcat churns out).

Having seen a TRX lose to a Ford Flex on the drag strip, I’m excited to see more footage of the absolutely fantastic acceleration from the TRX and I hope that the Cybertruck performs spectacularly.