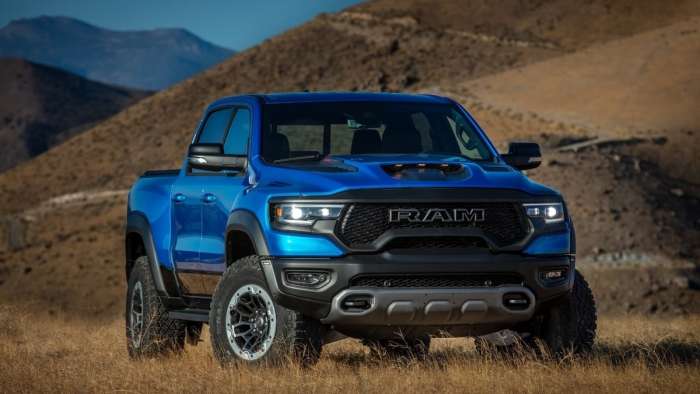 The impressive 2021 Ram TRX won an important award in a region known for off-roading on rugged terrain.
Advertisement

In reviewing all of the trucks that qualified this year, the RMAP nominating committee considered performance, fuel economy, value and vehicle features to narrow the field to four finalists. A key component of the judging is how well the vehicle handles and performs on the Rocky Mountains’ varied and often rugged roads and terrain.

What Makes the 2021 Ram TRX Special

The 2021 Ram 1500 TRX has been one of the most anticipated vehicles ever. It was first shown as a concept truck in 2016. After the concept vehicle created a huge response, Ram set out to build a truck that would outperform its competitors. The 2021 Ram 1500 TRX gets its 702-horsepower from a supercharged 6.2-liter HEMI V-8 that produces 650 lb.-ft. of torque. The TRX’s frame uses high-strength steel to improve durability and stability both on and off-road. The HEMI V-8 is mated to an eight-speed TorqueFlite transmission. It is the fastest mass-produced truck ever.

Just this past weekend, the first production 2021 Ram 1500 TRX sold at the prestigious Barrett-Jackson Auction in Scottsdale, Arizona, for $410,000. Every dime of the money raised will go to help veterans through the United Way of Southeast Michigan’s 2-1-1 helpline. The Ram TRX VIN #001 was part of the launch edition of the truck, which was limited to just 702 vehicles.

“When Ram 1500 TRX VIN 001 rolled off the assembly line, it instantly became an incredibly exciting one-of-a-kind collectible truck, and that was reflected by the winning bid,” said Mike Koval Jr., Ram Brand Chief Executive Officer – Stellantis. “More importantly, we’re thrilled that the first Ram 1500 TRX raised significant funds that will go directly to the United Way for Southeast Michigan’s 2-1-1 helpline to provide services to veterans and their families.”

The 2021 Ram TRX has already received a number of prestigious awards. The Ram 1500 TRX was voted Motor Trend’s Truck of the Year. The Ram TRX was also recently named FOUR WHEELER 2021 Pickup of the Year for its off-roading prowess. The 2021 Ram 1500 TRX is clocked at doing 0-60 miles per hour in 4.5 seconds, the quarter mile in 12.9 seconds at 108 mph and a top speed 118 mph. The TRX is the quickest, fastest and most powerful mass-produced half-ton pickup truck in the world. The truck was also named to the Car and Driver Editors' Choice list.

RMAP membership consists of automotive journalists from Colorado, Utah, Wyoming, New Mexico, Kansas, and Nebraska. RMAP members reach millions of potential car, SUV, and truck buyers via the internet, in print, on TV, or via radio. I have been a member of RMAP since 2013.

Typically, the winners of the Rocky Mountain Truck of the Year are announced in the spring during the Denver Auto Show. However, the show has been pushed back until September, because of continuing concerns about the COVID 19 virus. 2021 marks the fifteenth annual Rocky Mountain Vehicle of the Year awards.