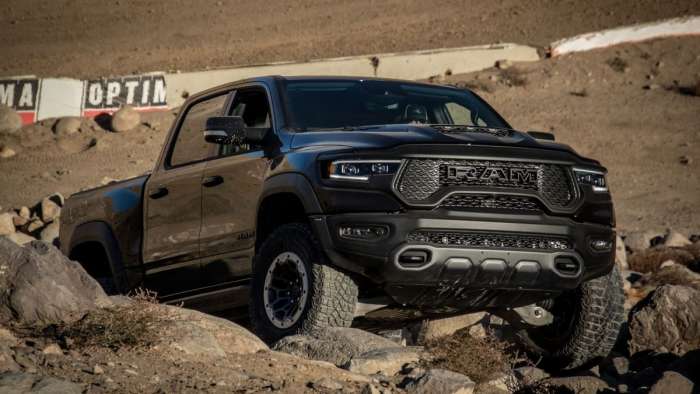 Four Wheeler just named the 2021 Ram 1500 TRX 2021 Pickup of the Year. The off-roading experts listed several reasons why it chose the TRX.
Advertisement

Ram and off-roading fans have been dreaming about the 2021 Ram 1500 TRX off-road truck since it was shown as a concept vehicle in 2016. When it debuted, it didn’t disappoint. It is a 702-horsepower beast that is specifically designed to handle both on-road and off-road with ease. Now, FOUR WHEELER is naming the TRX the “2021 Pickup Truck of the Year” and it lists several reasons why.

“The Ram 1500 TRX isn’t just a performance truck that absolutely owns the go-fast terrain, but it is also a capable crawler on the trail that offers impressive towing and payload numbers. The TRX easily shames sports cars on the pavement and the interior rivals anything the luxury class has to offer,” said Sean P. Holman, Content Director, Truck & Off-Road Group. “Surprisingly, the TRX is not a one-trick pony. It is one of the best all-around trucks we’ve ever tested, and the TRX just so happens to be able to carry insane speeds in the dirt with over 1,000 pounds in the bed with seemingly the same amount of effort as it takes to go down the highway on the way to work.”

“The Ram 1500 TRX is a breathtaking truck that flat out impresses,” said FOUR WHEELER Editor Ken Brubaker. “From its bad-boy muscular stance to its stunning pin-you-to-your-seat power to its incredible suspension that easily tames the worst terrain, the TRX is the total package.”

FOUR WHEELER’s "Pickup Truck of the Year" award is now in its 32nd consecutive year. It is only open to all-new or significantly revised pickup trucks for the upcoming model year.

After the concept vehicle created such a huge response, Ram set out to build a truck that would outperform its competitors. The 2021 Ram 1500 TRX gets its 702-horsepower from a supercharged 6.2-liter HEMI V-8 that produces 650 lb.-ft. of torque. The TRX’s frame uses high-strength steel to improve durability and stability both on and off-road. The HEMI V-8 is mated to an eight-speed TorqueFlite transmission. The TRX sits 2” higher than other Ram trucks.

The 2021 Ram 1500 TRX was also recently voted Motor Trend’s Truck of the Year. When the honor was announced, TorqueNews Managing Editor Patrick Rall wrote “The Ram 1500 TRX is the greatest off-road performance truck ever and this morning, it was named the best truck of 2021 by Motor Trend. To claim the 2021 Motor Trend Truck of the Year, the TRX beat seven other popular pickups to claim the title, but to anyone who has been fortunate enough to drive the Hellcat-powered Ram, this comes as no surprise. It might be a niche model, but it is incredible on the road and off, making it a deserving winner of this prized title.”

Tsingshan's Threat to Tesla: EV Maker Is In Battery Crosshairs
Tesla-Funded Research Reveals One of The Biggest Mysteries of EV Battery
END_OF_DOCUMENT_TOKEN_TO_BE_REPLACED