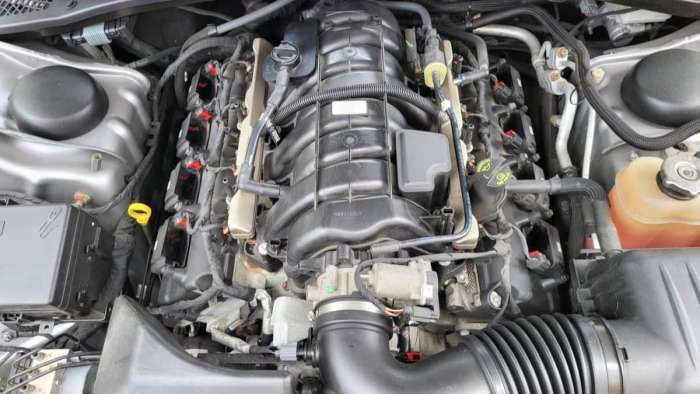 2 Weeks In: A Brief Review of Dodge Challenger Mileage and Ownership

The Dodge Challenger R/T Plus with a 5.7 Liter V8 engine sounds mean, looks meaner, but gets surprisingly good gas mileage for such a large powerplant.
Advertisement

When I bought my Dodge Challenger R/T Plus, I expected her to be a gasoline glutton.

I had expected to see like 12-17mpg, and indeed, when I first purchased the car, the average was 9 mpg. I’d guess because she’d been run rough more than a few times.

We’re now two weeks in for ownership of this gorgeous Billet Metallic machine and as long as I’m not pushing her, I’m seeing around 21mpg pop up on my dash. I’ll have to start writing down the fuel and mileage to try to see how I’m actually doing and see if the Electronic Vehicle Information Center (EVIC) is being optimistic about those 21mpg, or if I’m actually managing to keep this kind of mileage by just keeping her at 45-75 and getting her into 6th as expediently as possible.

When I had first purchased her, I was aware of Dodge’s Multiple Displacement System, or MDS. This is a rather cool bit of technology that allows the engine to effectively stop using 4 of it is 8 cylinders. In doing so, it can run with a more open throttle, which is more efficient. It is using more gas per cylinder in this configuration, but because the throttle is more open, there is more air, too, and the vehicle puts out the same amount of power while slowing down its revs. This makes for an increase in efficiency that would have made my mileage less surprising.

My husband’s Ram 1500 5.7L Hemi V8 had the MDS system. I don’t recall him ever getting over 16mpg, but the Challenger is a much lighter vehicle than the Ram; especially with all the extra equipment he added onto the thing.

But here’s the kicker: my 5.7L Hemi V8 engine does not come equipped with MDS technology.

No, My Dodge powerplant is forever in v8 mode; locked at 5.7L.

Why doesn’t my Challenger have MDS if it’s helpful at managing mileage? That’s actually a rather easy thing to answer with just a little bit of research. Dodge didn’t design MDS to work with their Manual transmissions, so they just leave them out.

A little more research into the MDS and automatic Challengers also served to make me rather thankful that I didn’t have an automatic with this fuel saving device. According to several Challenger owners, the vibrations the engine gives off during the change from 8-cylinder to 4-cylinder mode decrease the life expectancy of the timing chain significantly whereas the manual’s timing chain seems to be pretty much bulletproof even if it seems a little bit flimsy compared to the rest of the large hunk of steel.

So, that begs the question: how am I getting 21 miles per gallon on average when I’m rarely above 50 miles per hour and the estimated in town driving mileage for this vehicle is 15mpg? Where’s the other 6 coming from?

Let’s take a quick look at my driving habits and see if we can formulate a hypothesis about how and why I am seeing the numbers I’m seeing.

Most of the time, when driving I: keep the engine below 3000 rpm, preferring it to stay right at around 1200 rpm (this is when I feel my car makes the most pleasing pitch for constant driving. It’s not so loud that I have to shout to communicate with my passengers). I also tend to use 3rd for navigating parking lots, with a huge portion of that time spent with the clutch fully engaged.

I cannot say that I don’t occasionally bark the tires when I leave a red light; I’m still getting used to v8 power and I had only had 2-3 hours in a stick shift prior to purchasing my Mustang in 2020. I do like to open up the throttle when I get an opportunity. If I don’t have anyone in front of me at a stop, I’m up to the speed limit as quickly as that V8 will take me there, and I hold it at the speed limit until I have to come to a stop. As soon as I figure out what speed I’m going to be at, I pick the gear that’s going to let me keep that 1200ish sweet spot and I settle in for the slog. I’ve found that under 40, that’s usually 5th gear, and over 40, 6th is a comfortable bet until we get to hills.

Another possible factor in my fortuitously high gas mileage could be that I live in Florida and there’s very little in the way of hills during most of my commutes.

In my previous articles, I discussed that my spouse doesn’t really care about the ride, he’s more conscious of the mileage and the cost to get to the destination than anything else. From this fact I would say that it is safe to infer that he was probably more conscious about fuel savings than I was. Supporting evidence for this includes the EVIC screen he added to his dash to allow him to keep track of all of his truck’s workings. With that, he managed around 16-18mpg, with the 18mpg being on the trips to-and-from Gainesville, which is about an hour and a half slog up the interstate that allows for consistent speed, a must for good gas mileage, as inertia is the name of the game for hypermiling.

Dodge estimates that the Challenger’s 5.7 v8 is good for an average of about 23mpg. With the amount of sitting at lights and in parking lots, and with the amount of silly “fun” driving that I do, I’d say that 21 miles per gallon is quite epic. I’d only ever seen around 21-22mpg in the Mustang, and she had a 2L smaller v6… Maybe I need to work on my driving habits.