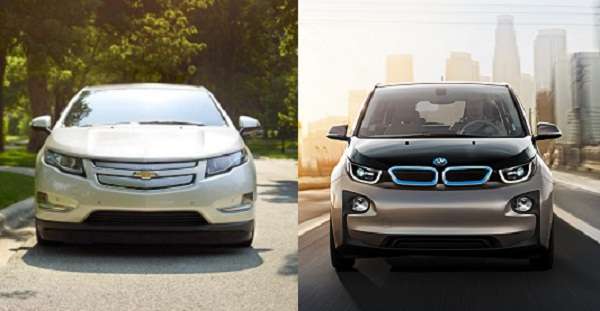 Aside from general misunderstanding of how plug-in hybrids work, an even less understood nuance is how the range-extended version of the BMW i3 is different from the most well known plug-in hybrid, the Chevrolet Volt. Torque News breaks it down.
Advertisement

The Chevrolet Volt and the BMW i3 REx are two electric vehicles that rely on gasoline backup to alleviate range anxiety. How the two vehicles go about it, though, is what distinguishes one from the other.

Chevrolet Volt: how it works

When it was first unveiled, GM tried to tell everyone that the Volt was a pure series hybrid; that is, the battery supplied electricity to the motor until it ran out, at which point the gasoline engine would rumble to life and generate electricity to feed to the motor. We eventually found out that GM wasn’t being entirely truthful and the real system is actually far more complex.

In reality the Volt is technically a series-parallel plug-in hybrid, meaning the engine is also capable of powering the wheels when necessary. The 16 kWh battery pack allows for approximately 38 miles of all electric range powered by a 149-hp electric motor. When the battery depletes to a certain level, the 1.4 liter 84-hp gasoline engine kicks on in a smooth transition. It functions as a generator to produce electricity for the drive motor.

Interestingly, though, the Volt doesn’t have just a single-speed direct drive transmission as you might expect for what is effectively an EV. It actually uses a planetary gearset with a second electric machine; the 149-hp traction motor is connected to the central sun gear, while the planetary carrier provides the output to the differential. The 72-hp generator motor can be fixed to the outer ring gear, the gasoline engine, or both at once using clutches.

This configuration allows for four different “drive modes” with the Volt, as described by Edmunds:

1 – Low speed EV mode. Up to 70 mph, the larger traction motor provides the necessary torque while the engine and smaller motor-generator are disconnected from the transmission and the outer ring gear is locked in place.

2 – High speed EV mode. Up to 100 mph, the Volt is still capable of running without using the gasoline engine. However, the configuration changes to improve efficiency above 70 mph. In this mode, the ring gear is fixed to the smaller motor while the larger motor turns the sun gear. Both motors turning in the same direction allows the planetary carrier to rotate faster and reach high speeds while keeping the speed of both electric machines closer to the optimal efficiency band. If the larger traction motor were to provide sole motive power at high speeds, electric range would be compromised as motors lose efficiency at excessive RPM.

3 – Low speed series hybrid mode. Up to 70 mph after the battery has depleted to a certain level, the engine fires up and is connected to the smaller motor that acts as a generator to provide electricity for the larger traction motor.

4 – High speed series-parallel hybrid mode. Above 70 mph with the battery depleted the engine will be connected to the outer ring gear to assist in providing power the wheels. It also is fixed to the smaller motor-generator to simultaneously recharge the battery, which forces the engine to work harder. In this mode the larger traction motor is still driving the sun gear; the vehicle cannot move unless the traction motor is operating.

Note: A previous version of this story contained inaccuracies in the drive mode descriptions, pointed out by alert readers. We regret the confusion.

So it is clear that the Volt is more complex than you might think. After the electric-only mode is exhausted, the vehicle gets somewhere between 35 and 40 miles per gallon, not great for a hybrid. But it is capable of driving about 350 miles on a tank, which makes it an EV that is practical for long trips.

BMW i3 REx: a different approach

BMW went a different route with the all-new BMW i3. The vehicle is offered as either a battery electric or a plug-in hybrid REx model, and the buyer can choose which he prefers. The optional range extender gasoline engine costs about $4,000 extra, and lengthens the vehicle’s effective range from 72 miles to 150 miles. The unladen battery electric version without the range extender achieves 81 miles of range per charge.

The gasoline engine in the i3 REx is very small and serves only to increase driver confidence, and the 1.9 gallon fuel tank only provides enough juice for an additional 80 miles after the battery is depleted. The two-cylinder engine is pitifully small at 0.68 liters; once it switches on the vehicle’s performance can be negatively affected in some situations. The 170-hp motor cannot call the same power from the battery that it can in EV mode if it exhausts a certain reserve, as it is relying on the tiny engine to spin a generator that provides electricity for the motor.

The most interesting aspect of the i3 REx is simply that it is optional. BMW obviously reasoned that allowing customers a choice would help the vehicle sell to more drivers concerned about the limitations of an 80-mile electric range. Although it makes the i3 viable for trips up to 150 miles, the vehicle is without a doubt compromised by the addition of the range extender and should be driven with only the battery as much as possible.

Which should you choose?

Both vehicles serve their intended purpose, but that purpose is not the same for each. The Volt is the car that is ideal for shorter commutes in EV mode and the occasional long road trip when necessary, and eliminates any shadow of range anxiety. The i3 REx is primarily a pure electric car that just happens to have an emergency backup engine that reduces performance when it is needed. The REx can commute twice as far as the Volt in EV mode but is not viable for long trips.

Both vehicles are not cheap, although the Volt has come down in price and will drop further with the next generation in 2015. The Volt starts at $34,185 while the BMW i3 REx will set you back a cool $45,200. If you’ve got the cash, both are excellent vehicles that go about their different tasks in different ways.