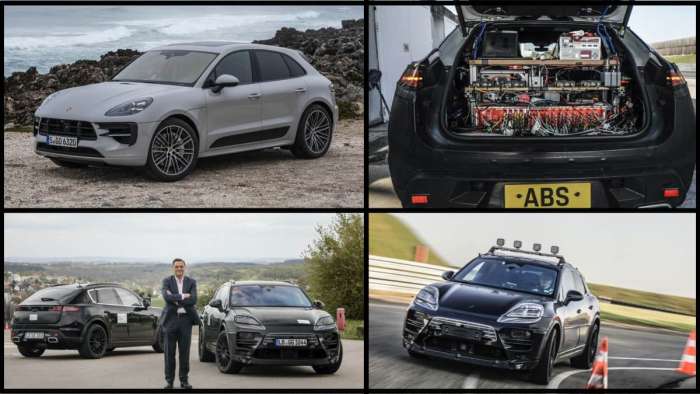 Move Over Mustang Mach E; The Porsche Macan Has Come To Take Your Crown

With new electric vehicles popping up in the category seemingly every day, vehicles like the Mustang Mach E, the Volkswagen ID.4, and the Audi E-Tron will find themselves awash in competition shortly. Enter the Porsche E Macan, an all-electric SUV that promises to outdo others in range and sportiness.
Advertisement

We have already seen that Porsche can deliver a stunning product that utilizes electric motors. The Porsche Taycan is a symphony of German engineering, inside and out. Now the Stuttgart-based auto manufacturer has decided to phase out the gas version of their smaller SUV, the Macan, giving it a battery makeover that promises to be an exciting addition to the Porsche line-up.

The “E Macan” has promised to share aesthetics with its gas-powered forerunner, but by replacing the 434 horsepower twin-turbo v6 that’s found in the quickest versions of the Macan, we can expect the sporty SUV to blast the 4.5 second 0-60 out of the water. Porsche has already stated that they intend on making the electric SUV more aerodynamic which can only assist the storied instant-on-torque of an electric motor push the Macan faster, though it is worth noting that the weight of batteries could make the E Macan heavier than its gas equivalent. It’s worth noting that the Taycan weighs up to 5000 pounds, more than the current model of the Macan, and it’s difficult to imagine a vehicle like the Macan weighing less than the Taycan if it has the same architecture supporting it and even more battery.

While Porsche hasn’t specifically stated which motors will find their way into the architecture that they’ve adopted (with the help of Audi and VW), the Premium Platform Electric (PPE), they have announced that it will utilize an 800 volt battery like that found in the Taycan. Market research with the Taycan has shown Porsche that it would behoove them to increase the range available to the Macan and have rightly promised to do just that. I’d wager that Porsche will do everything in its power to get the E Macan’s batteries and motors to work together to get at least the 300 mile range we’ve seen in the Mustang Mach E; they can only expect the Porsche moniker to bring in so much business.

The Taycan Turbo S utilizes two motors and produces 616 horsepower. If the E Macan uses the bigger motor option, it will have 232 more “horses under the hood” than the Tesla Model Y Performance, and 136 horsepower higher than Ford’s Mustang Mach E. Both the Model Y and the Mustang Mach E claim 0-60 sprints under 4 seconds. It’s difficult to imagine a higher power, higher torque Porsche testing slower than its peers; especially with Porsche’s impressive racing record. If the Macan also receives the lower output powerplant of the base model Taycan, it will be starting with about 321 horsepower to work with, less than the Model Y. The smaller motor should use less electric power and get more mileage but I would be surprised if Porsche only offered the slower option in an attempt to garner the image of range-leader.

An 800 Volt battery will allow the Macan to utilize fast chargers, the PPE is a beefed up version of the Volkswagen Modularer E-Antriebs-Baukasten (MEB) architecture which has already proven itself capable of 1000 mile jaunts through some of the most inhospitable environments on planet Earth, and Porsche has promised to improve the aerodynamics of one of their most popular models. I personally think that this promises to produce another impressive offering from Porsche.

I think it will be interesting to see exactly where Porsche goes with the Macan from here as they always seem to push the envelope with their vehicles. Porsche seemingly plans to offer the Macan as both gas and electric models in an effort to please potential buyers that have a preference one way or another. As Porsche electrifies the Macan, is it possible that we’ll see a Lamborghini Urus with a plug on its side or rear? Could Aston Martin make the DBX into a stealthy, silent street-prowling SUV?

Most people agree that the future of the automobile is electric. Luxury SUVs will not be an exception and we’ll see more and more iconic vehicles sporting electric or hybrid options like the GMC HUMMER EV or the Jeep Wrangler 4xe in the coming days, but when the Porsche E Macan finally makes its way to American dealerships, you can bet that I’ll be eager to get myself in the seat of one.