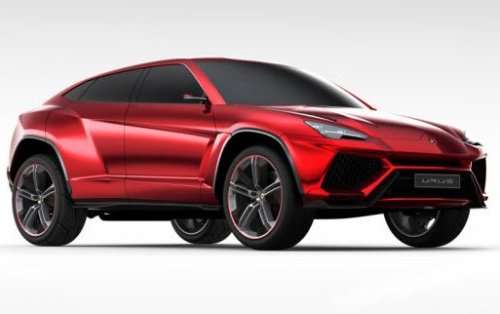 Last week we got our first look at the new Lamborghini sport utility vehicle, dubbed the Urus, and with the debut of the Urus at the Beijing Motor Show – we have more information on what will very likely be the highest performance SUV on the market when it arrives in 2015.
Advertisement

The Lamborghini Urus is introduced as being “the ultimate super athlete in the SUV segment” and while actual specifications are still unlisted; the Italian automaker is promising somewhere in the area of 600 horsepower so it will surely be among the most powerful sport utes available in the world. Also, for those who want to have less of a negative impact on the environment while driving their high priced, high horsepower luxury SUV, Lamborghini promises that the Urus will offer the lowest carbon emissions of any vehicle in the segment. The company hasn’t stated what engine will be found under the hood of the new Lamborghini Urus but considering that the new super SUV isn’t slated to arrive until 2015 – there is a good chance that the Urus could feature a new motor with a smaller displacement packing forced induction. This would likely allow the Lamborghini sport ute to offer the huge power while also fitting within European emission standards that are gradually getting more and more strict.

In addition to offering more power than any high performance SUV on the market, the Lamborghini Urus should be stunningly nimble thanks to a combined effort between the ultra lightweight construction and Lamborghini’s advanced all wheel drive system. The all wheel drive system works with the dual clutch automatic transmission to offer firm footing in poor conditions while also offering incredible grip during spirited driving…just in case some Urus owners want to venture out into the snow in their $200k+ Italian sport ute. Helping to reduce CO2 emissions, improve fuel economy and enhance handling dynamics is a lightweight structure that features gobs of carbon fiber inside and out – a fact that Lamborghini states will make the Urus lighter than other high performance sport utility vehicles around the world.

The Lamborghini Urus features the typical edgy, aggressive styling that we have become accustomed to from this Italian supercar builder but the Urus is more than just a high riding version of one of their cars adapted slightly to look like an SUV. The Urus rides high enough to offer proper ground clearance for a sport SUV but with an adjustable right height and adjustable front spoiler – the driver and adjust whether he wants versatility and more ground clearance or less clearance and better aerodynamics for improved performance.

The Urus is obviously larger than the other bulls in the Lambo stable, offering seating for four adults in a package that spares no driving excitement. Like the exterior, the Urus interior is packed full of high tech carbon fiber composites that help keep weight down without reducing the level of ultimate luxury. We can expect plenty of leather cladding with carbon fiber panels and seats; joined by lots of technology in the way of the navigation and infotainment system.

The key inspiration behind the Lamborghini Urus (other than the booming high end SUV segment) was the Lamborghini LM002 sport utility vehicle that was available from 1985 to 1992. At that time, the LM002 was really the only high performance SUV on the market, packing 450 horsepower, but the fact that it was so unique and so far ahead of its time cause less interest than expected from the new Urus. Where Lamborghini sold just over 300 LM002 SUVs in the 80s and 90s – the supercar builder expects to sell around 3,000 examples of the Urus each year once introduced. This figure would instantly make the Urus Lamborghini’s bestselling vehicle.

You are probably wondering about the name of the new Lamborghini Urus and like the majority of current Lamborghini models – the new SUV draws its name from the world of bulls. The Urus is a wild (non-domestic) ancestor of domestic cattle that is similar in appearance to the current Spanish fighting bulls but it is larger; with a build more like those bulls used for pulling. A nice play on things, if you ask us, as the Lamborghini Urus is a larger vehicle that is similar in styling (appearance) to the current Lambo lineup that derives its name from Spanish fighting bulls. Well played, gentlemen…well played.

Unfortunately, these scant details are still preliminary figures and with the Lamborghini Urus not due to hit the market until 2015 – it could be some time until official specs are available. In the meantime, high performance SUV enthusiasts can rest assured that the Lamborghini Urus will arrive within 3 years with the intention of raising the bar for the booming high end SUV segment.