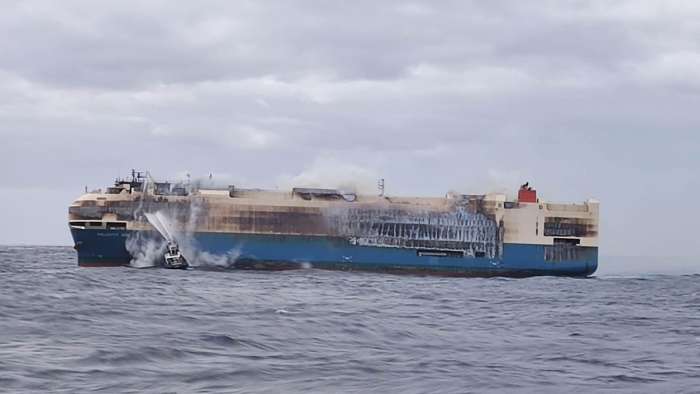 Specialized firefighting equipment is on its way to the Azores Islands while the abandoned ship continues to drift and burn in the Atlantic.
Advertisement

Today marks the fifth day that the Felicity Ace, a 650-foot car carrier ship with more than 4000 Volkswagen Group vehicles on board, continues to burn in the Atlantic Ocean near Portugal's Azores Islands. Fire broke out in one of the ship's cargo holds on Wednesday morning, spreading and becoming uncontainable to the extent that the Portuguese Air Force and a passing oil tanker had to step in to evacuate the 22-person crew. Now the ship lies adrift and smoldering off the Azores Islands, with burning electric vehicle batteries causing further headaches for firefighters. 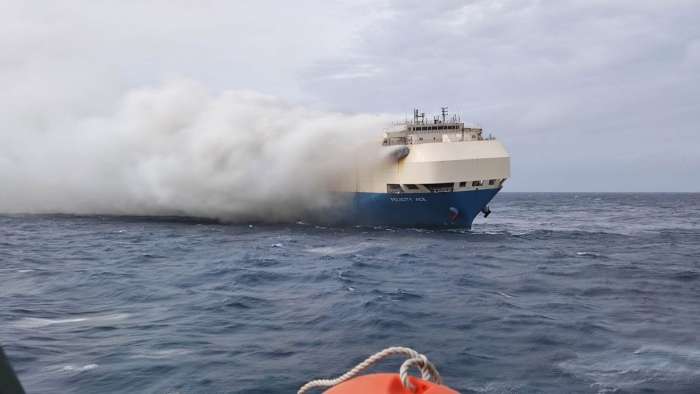 What's On Board?
All of the 4000 vehicles aboard the Felicity Ace belong to Volkswagen Group companies, with at least 1,100 Porsches stowed below its decks according to a spokeswoman for Porsche North America. The rest are Audis, VWs, and Bentleys. It's unknown if there are any Lamborghinis caught in the fire. The Providence Journal reports that a spokesman for Quonset Development Corporation, the people that operate the Felicity Ace's first port of call, stated that none of the 1582 vehicles scheduled to be offloaded feature raging bull badges. He could not, however, speak to deliveries scheduled to be made at ports further down the east coast.

The Intended Route
The Felicity Ace left port in Emden, northern Germany bound for Davisville piers in North Kingstown, Rhode Island, making it as far as Portugal's Azores Islands before the evacuation order was given. The Islands lie roughly 850 miles west of the Portuguese mainland, and unfortunately for the salvage operation there's nowhere large enough to handle the ship should it be towed there after the fires are put out. That means that if it's still seaworthy once the blazes are finally extinguished it'll have to be towed back to Portugal to be repaired or scrapped. 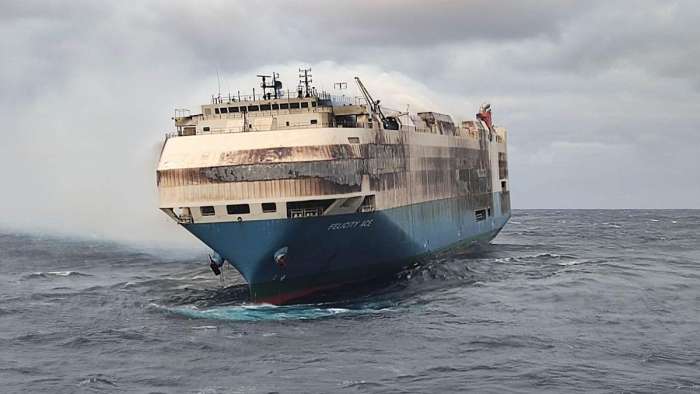 What Will Happen To The Ship?
Dutch salvage firm SMIT Salvage is reportedly handling the operation, and is bringing in specialized equipment from Spain and the Netherlands to put out the electrical fires caused by EV batteries. What will happen to the ship after the fires are out is unknown. Maritime salvage law dictates that the salvage party can negotiate monetary compensation with the owners of the ship and the goods it carries, but first they have to recover the vessel. With the right firefighting equipment still not on the scene, and a long haul back to mainland Europe (if indeed that's possible) it's too early to say what will become of the Felicity Ace and her cargo of luxury automobiles.

Images by the Portuguese Navy licensed by CC BY 2.0.