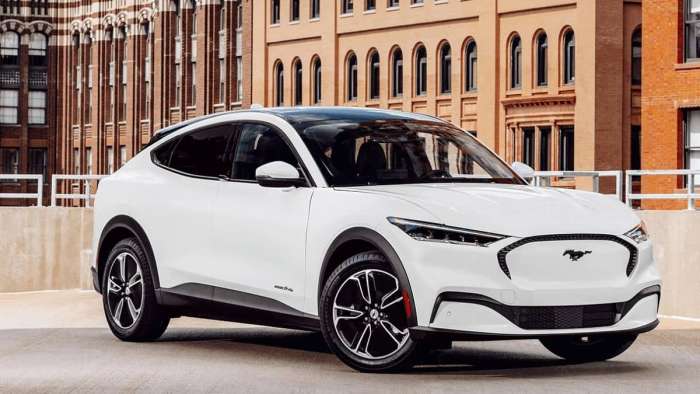 Mustang Mach-E: One Driver's Opinion and Where Is The Beef?

Is it just a chunky Pony? The Mustang Mach-E is not what I was expecting when I thought a Mustang would enter the EV game. Something more along the lines of that sweet SEMA show Mustang from Webasto; the Mustang Lithium, I had fully been ready and hoping for. A manual transmission with all the down-right amazing torque of an electric powerplant? Sign me up already.
Advertisement

But, instead, what we got is somewhere between a hatchback and a cross-over and I’ll be hones, I don’t hate the looks. The Mustang Mach-E EV is just none of the joy that I associate with the shape of a Mustang. It’s got curves in all the wrong places and the only thing that is remotely Mustangy(sp)/Mustangish? to me, is the faux grill up front. Looking back at classic Mustangs, we see the notchback and fast backs of the 60s and early 70s and we know “yep, that driver doesn’t have children with legs”. Even the hatchbacks from the 80s-90s were obviously not made for more than a menage-a-trois. But this looks like some sort of family vehicle. I suppose that’s supposed to be part of the draw for it; that it is capable of sports-car stats while still performing some function for a family, but is that what the current generation’s family wants or needs?

In the last several years, we’ve seen a vast decrease in the number of people who have kids, and many of those who are having children are choosing to do so later. With this change, we’ve seen the meme “pets are the new kids, plants are the new pets”.

If this is the case, and people are moving away from having larger families, will the increased size really be a boon?

Sure, the increased back seat size and having a hatchback to stuff full of whatever you might need to haul is useful, but is that what having a pony car is about? Is that what a pony car owner thinks about?

When I first bought a Mustang, I switched over from a Subaru Legacy with a lethargic CVT because the Mustang was so much more fun to drive. It was a 2013 3.7L v6, so sure, it wasn’t the fastest car in the world, but It was fun and easy enough to make it go sideways. I bought that car for the same reason I’ve purchased every car I’ve bought since: for the experience of driving it.

The Subaru Legacy was predictable and easy to drive. It was reliable and a truly wonderful commuter vehicle, but I hated it. I hated how slow it was and how it felt more like I was driving a bath tub than piloting a vehicle (not because it was unwieldy or overly large, just because it couldn’t get out of it’s own way). This new Mustang, the Mach E looks like it’ll be lethargic and sad and un-fun to drive, but every experience I read or see is the exact opposite. I remain unconvinced that it’s worth swapping to the pony car’s chunky sister when we now know that a lithe, all electric REAL Mustang is in the works, expected to release sometime in the next few years.

I swapped out a reliable family sedan for a fairly capable sports coupe because my spouse and I only have fur-babies. We don’t intend to ever have children and we don’t need the space. We’re a two vehicle household. At the time, he was driving a Dodge Ram that was more than useful, and now he’s in a Ford Energy Fusion hybrid that “doesn’t even use a drop of gas when we go visit your(my) mom.”

I derive dopamine from driving. Feeling myself pressed into the door, or seat, or center console while I am accelerating, or swinging the back-end of my car around in a barely controlled arc; this is what I live for. This is what cranks my gears and gets my heart pumping. My spouse only views his vehicle as a means of getting from one place to another faster than walking. My spouse also can’t tell the difference between a Mustang, a Camaro, and a Camry, so it tells you a little something about the kind of person who feels that way about cars: they don’t care about the label slapped on it. To him, the mustang badge doesn’t add anything to the EV. To me… I don’t know. It’s not that it’s an EV that is a problem, it’s that it’s only automatic, and it’s some sort of bulbous cross-over rather than a fast-back or hatch-back coupe. It doesn’t look the part. Maybe it drives it.

The blue oval expects 3.8 seconds out of the Mach E for a 0-60; that’s about 2 seconds faster than my first Mustang. So she’s fast. She’ll get you from point A to point B in an expedient manner. She might even be fun to drive while she’s doing so. I don’t know how the drive would be fun because I’ve not had as much fun driving automatics as I have with manuals.

The Mustang Mach-E is a different breed of EV. It's like having a 4-door Corvette on the horizon. In my eyes, it’s like seeing a Ferrari SUV.

Karl A Holmes wrote on August 27, 2021 - 4:00pm Permalink
U obviously don't know jack about evs U r driving a manual One pedal driving and no transmission gears except one U control everything with ur foot And as far as torque instantly at ur foot how much more control do u want
Frank DiMuccio wrote on August 27, 2021 - 9:03pm Permalink
Hi there! It sounds like you've never performed a clutch kick before. Have a great day!