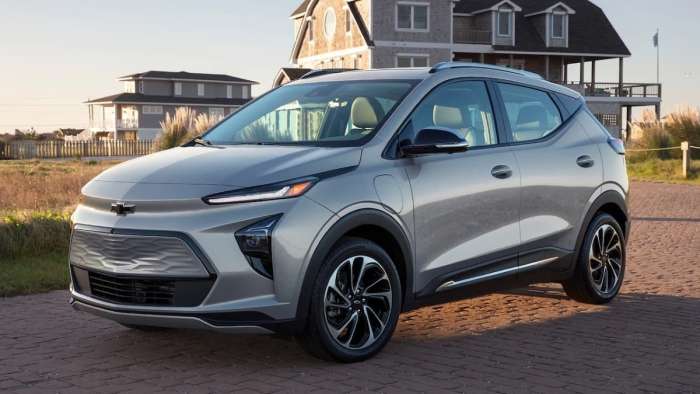 GM’s New SUV Has Better Range And Is $9,000 Cheaper Than The Tesla Model Y

GM has unveiled their new Chevy Bolt EUV. The SUV has a better EPA estimated range and comes in $9000 cheaper than the Model Y.
Advertisement

GM has finally taken the wraps off their new all-electric crossover SUV, the Bolt EUV (electric utility vehicle). This is the company’s most important electric vehicle launch since the original Bolt launched to much fanfare back in 2017.

The price was a surprise, starting $9,000 below Tesla’s comparable Model Y crossover. The Model Y starts at $43,200, after adding the mandatory delivery and doc fees. And that is even compared to the newly introduced cheapest Standard Range Plus Model Y. 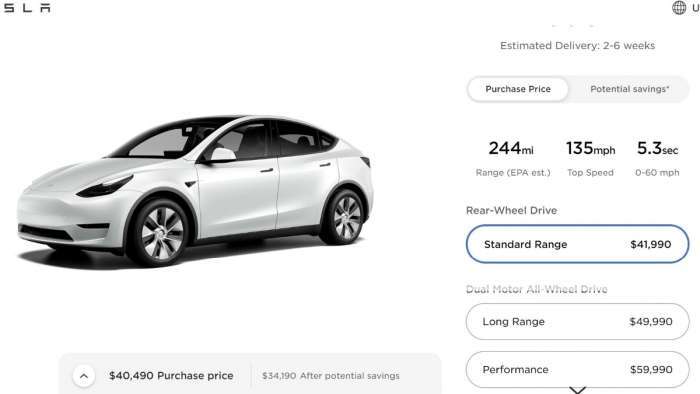 The specs of the Bolt EUV are, 250 miles EPA estimated range, supports DC fast charging, 65 KWh battery, 200hp, and 266lb-ft of torque. But unfortunately, there isn’t an all-wheel-drive version of the SUV.

The first version of the Bolt EUV to come to market in the summer of 2021 is the Launch Edition. This version standard will have a panoramic roof, Super Cruise driver assistance, unique wheel, and badging, and illuminated charging port.

The other versions to launch in the summer are the LT and the Premier. The LT is the base version and doesn’t come with any of the bells and whistles. The Premier on the other hand starts at 38,500 and has adaptive cruise control, a camera for the rearview mirror and HD surround vision standard. The owners of the Premier version can also upgrade to the GM Super Cruise hands-free driving system.

Going just by the specs the Bolt EUV is somewhat comparable to the Tesla’s Model Y even though the former might not have the same performance numbers. The Standard Range Plus Model Y has a 244 mile EPA range, does 0 to 60 in 5.3 seconds, and has 250KW DC fast charging. For people who just want a compelling crossover EV, and are not interested in Tesla technology features, the $9000 saving might be enough to make them go with the Bolt EUV over the Model Y.

For people living in the handful of US states which offer some kind of EV rebate, the Bolt EUV might even be had for below $25,000. This puts it in the same price range as other popular gas crossover SUVs from Honda, Toyota, Volvo, and the likes. 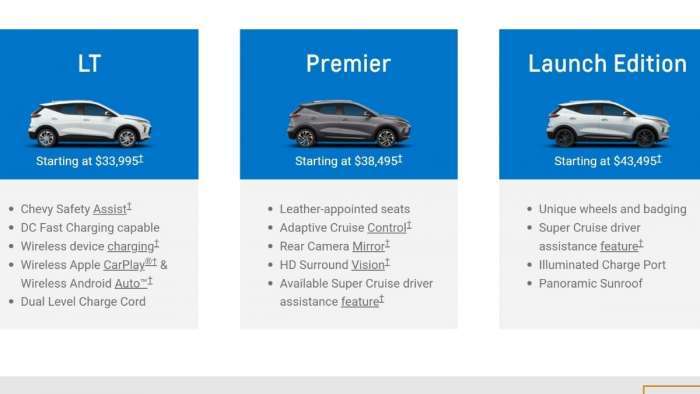 The compact crossover SUV is the biggest car segment in the US. It accounts for 24 percent of the market, and 4 million cars are sold every year. And in this segment, which has an average selling price of $33,000, the Bolt EUV comes in just at the average price even before any incentives.

So what do you think? Are you excited about the Bolt EUV? Do you think it is a better buy than the Tesla Model Y? Let me know your thoughts down in the comments below.

Kepolas wrote on February 16, 2021 - 4:41pm Permalink
Granted, the Base Bolt EUV is approx. $9,000 less than the Standard Range Tesla Model Y, but the Bolt EUV Premier is a more accurate comparison based upon the included features. Although the Bolt EUV Premier still ends up being $4,700 less than the Tesla Model Y, the increased benefits of the Model Y (such as a Frunk which is missing in the Bolt EUV, a full glass roof, access to the Tesla Supercharger network, over the air updates, greater MPGe efficiency, and better resale value, to name a few) make the cost difference less appealing for many EV buyers.
Dolan Halbrook wrote on February 17, 2021 - 1:46am Permalink
As a Bolt owner, it's disappointing to see the quick charge rate still so limited on the new models. It really hampers the usefulness of an otherwise pretty well designed car. This alone means you can't really compare the Bolt EUV to the Tesla Y, unless you never drive farther than a single charge.
Hugh Caley wrote on February 17, 2021 - 2:19pm Permalink
If you are going to compare this car to the Tesla model y the true headline should be GM expects to release new SUV model electric car in summer 2021 more than year after the Tesla model y and with nearly comparable range. What is the point of this misleading headline?
Tinsae Aregay wrote on February 19, 2021 - 12:02am Permalink
That would be too long though
Curtis Clark wrote on February 19, 2021 - 12:10am Permalink
Actually, the $9k price difference increases closer to $11,000 less for the Bolt EUV as this includes delivery [I believe Tesla delivery fee is around $1k] plus GM is including level 2 charging capability for the Bolt w/ a level 2 charger & free home charger installation [up to a $2,000 value] plus they increased the charging rate to 11kw from 7kw. Also note that either 2022 Bolt now has DCFC as standard equipment, which was a $750. option prior yrs.
Tinsae Aregay wrote on February 28, 2021 - 10:18am Permalink
Yep it might even be a larger difference. Does this make the Bolt attractive enough to buy?
Alan Staight wrote on February 28, 2021 - 5:32pm Permalink
GM led the field with EVs back when i was a kid. This new bolt is not really an SUV, no AWD option? Not an SUV. I just bought the standard range model y, after looking at the bolt, polestar 2 and ionic 5 there was only one real choice... the standard range model y. The value for money is in a tesla, the rest of the field is just trying to make a knockoff version without really caring about making an excellent product imo