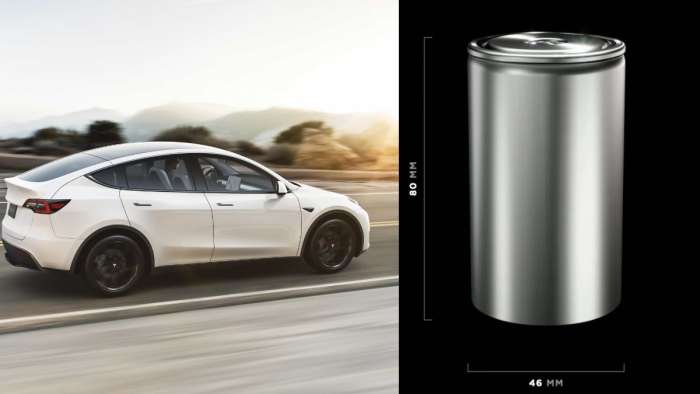 Tesla's Battery Day revealed their new 4680 batteries. But when will they be used in production Teslas? And how do we know that they are not already being used in Tesla's EVs today?
Advertisement

I was just contacted by Jerry, who is looking to buy a Model Y LR soon, but who wants to wait until Tesla builds their U.S. Model Ys with the new 4680 batteries.

Jerry wondered if Tesla might already be shipping the latest Model Ys with the new 4680 batteries. And how could we find out for sure if Tesla was secretly releasing their 4680 batteries in production models now.

This is always a concern of everyone who buys a new vehicle, but especially considering that Tesla announces some major design revisions years ahead (like at their recent Battery Day event), but releases the changes sporadically.

The quick answer is that I do not see the 4680 batteries being used in the U.S. Model Y until at least the end of this year, but I could be totally mistaken. Elon Musk has revealed that Tesla has plans for a revised Model Y with both front and rear cast frames, a structural battery case in between, using their new 4680 batteries. But Tesla also made a big deal about the fact that the upcoming European Model Y would be a unique version of the EV compared to the U.S. and Chinese built Model Ys. Still, Tesla does not want to upset the new China Model Y buyers, or slow U.S. Model Y sales with hopes of a better 4680 battery powered version of the EV coming soon.

We do know that the Plaid Model S and upcoming Plaid Model X will be using revised Panasonic 18650 batteries when they are released in the next month or two. But we also know that the 4680 batteries will definitely be used in the Plaid+ model, due later this year. Previously, I had guessed that different battery makers could produce their own versions of Tesla's 4680 batteries (using the 4680 battery format and tabless design) but perhaps without using Maxwell Technologies' dry electrode, high nickel chemistry. Much of this choice depends on whether Tesla needs Panasonic and LG's help in meeting their huge upcoming 4680 battery production needs. This is compared to Tesla's chances of ramping up their own 4680 battery mass production at their Giga factories. I don't see Tesla risking their innovative battery patents in China, but they could share them with their partner and investor Panasonic, and possibly LG Chem because of their shared battery production coming in Germany.

As far as being able to tell whether or not Tesla decides to "sneak" the 4680 batteries into earlier U.S. models, it is possible. But I do suspect that either the vehicle's weight will be lower due to fewer 4680 batteries needed for the same range and power, or the range capability will rise noticeably as is shown with the predicted 520+ mile range of the upcoming Model S Plaid+, the Plaid Cybertruck, and the 2022 Roadster. Tesla does have a history of silently integrating new improvements into currently shipping models without announcing them.

From software improvements, to design elements like the OctoValve, to safety and other hardware upgrades, to the latest unannounced Model Y console, headlight, and heated steering wheel updates, changes and improvements have been made without notification many times before. So this would not be unprecedented.

Like all modern automakers, Tesla is always faced with the "Osborne Effect", where announcing improvements to future models slows (or stops) sales of existing models. But I would be very surprised if Tesla decided to "sneak" the 4680 batteries into U.S. built Model Ys and Model 3s until at least the end of this year. The release of the Giga Berlin Model Y, which should be using Tesla's new 4680 batteries will probably be the next big news revealed by Tesla. Which I think will happen soon, before the $25K China-built "Model 2" production is formally announced.

Kepolas wrote on February 16, 2021 - 1:29am Permalink
Dean - I would expect that once the Austin, TX Factory begins producing Model Y's that they will have the front & rear castings, the 4680 structural battery, and the enhanced paint process that will first be released in Berlin. I don't think it would make sense to build a brand new factory in Austin and outfit it to produce the current design of the Model Y when the one in Berlin is a superior design which hopefully will also have a lower production cost. What I'm curious to see is how Tesla will deal with issues related to a new version of the Model Y being produced in Austin while the older design is still being produced in Freemont - they said that Freemont will supply vehicles to the West Coast, while Austin will supply the Eastern part of the country. I'm in Colorado - do I get to choose which one I want? I will be waiting to see how they address this issue.
DeanMcManis wrote on February 16, 2021 - 10:06pm Permalink
Kepolas, I totally agree with you, and I fully expect that the Model Ys (and Cybertrucks) will have the frame castings and 4680 batteries as well. But I think that Giga Berlin Model Ys will be the first fully updated models produced and announced, and I think that Texas and Fremont will follow shortly afterwards with the updates. And all of this will likely happen within a year from now. But it is possible that the updated U.S. Model Ys may be built and sold before their upgrades are formally announced.
Edfran wrote on February 16, 2021 - 2:23am Permalink
Due to it far lower heat losses, the 4680 is not likely to go into a chassis until the Model Y heat pump is integrated.
DeanMcManis wrote on February 16, 2021 - 10:08pm Permalink
Seeing that the heat pump has been in the Model Y since production started, and has now been added to the Model 3 and new Model S and X, it is not really a problem. Because they all have heat pumps now, which is great!
Steve wrote on February 16, 2021 - 1:51pm Permalink
I'm in the same boat where I want to purchase a Model Y 7 seater but will wait until they use the new 4680 battery. Also Biden might extend the EV tax credit so that's even more reason for me to wait.
Rudy Prasetyo wrote on February 16, 2021 - 7:35pm Permalink
Please go back to reliable NMCA battery
DeanMcManis wrote on February 17, 2021 - 2:12am Permalink
Steve, It has got to be hard to hold off, but the potential rewards look worth the wait. It is going to be a race to see if Giga Berlin or Giga Texas starts production first, but certainly they will both be building the new Model Y this year. Rudy, I am not sure what you want to happen, but this is what progress looks like.
Avnish wrote on February 22, 2021 - 2:20pm Permalink
I would think 4680 batteries would be added to Model X (especially Plaid editions) before Model Y?
DeanMcManis wrote on February 22, 2021 - 7:46pm Permalink
Tesla may silently sneak them into the Model X and S. We know that the Model S Plaid+ will be getting them later this year. But I think that Giga Berlin may be the first to build the 4680 batteries into their upcoming Model Y, mostly for marketing reasons. Europe has a huge push for EVs, as China does. And in a few months when production starts up at Giga Berlin, and the first Model Ys start coming out, Tesla wants to have the most competitive EV available for sale in Europe, and that would be assured with the 4680 batteries and new chassis. It is harder to change the production at Fremont because they are continuously building cars there at a fevered pace.
HardyAcree wrote on March 27, 2021 - 7:24pm Permalink
Dean, what’s your best guess as to when we’ll see the 4680 going into the Model S LR? Thanks, Hardy
DeanMcManis wrote on March 31, 2021 - 1:51am Permalink
I think that when the 4680 battery factories in Texas, and Germany get into full swing and both Panasonic and LG gear up mass production in 2023 that the Model S and X LR models will be transitioned to 4680 batteries. The good news with the Model S is that the Plaid+ will get them first here early next year. So the transition for the other models will only be limited by 4680 production. Elon admitted that the delays in releasing the Tesla Semi were primarily due to battery constraints, despite low production numbers. I am hoping that Panasonic's pilot 4680 production line comes up later this year, but much of the volume will go to the first Semis. The hopefully the 4680 battery production will ramp up in Giga Texas. But the 4680 batteries there will likely go to the updated Model Y and Plaid Cybertrucks initially. Entry level Model "2" and Model 3 and Y will get cheaper LFP batteries, and Tesla will try to extend the 16850 and 2170L batteries as long as possible to fill the bulk of their sales until 4680 battery production really ramps up in 2023-24. I am guessing by your question that you were hoping for 4680s to make it to the Model S LR later this year, but from the sound of battery production delays now, that transition is still a few years off.
Zack wrote on April 10, 2021 - 1:11am Permalink
I feel like Berlin will have the 4680 first then Texas. Not counting the Plaid+ or semi. They'll ramp up Texas for a few months after test production and stock pile cars until they get higher production rates. Then shut down Fremont for a month or more to switch it over. I think Shanghai would be last to switch over.

Tesla-Funded Research Reveals One of The Biggest Mysteries of EV Battery
Tesla Tesla Buyer Nets a Whopping $12,000 Discount After Asking for Reduction
END_OF_DOCUMENT_TOKEN_TO_BE_REPLACED