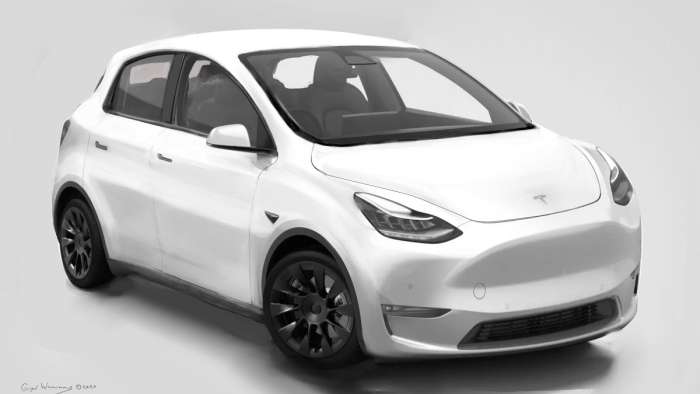 I have been thinking through the Tesla Model 2 and its compact design, but after watching a YouTube video about it and reacting negatively I photoshopped a Tesla into a Zoe footprint and deigned my own concept of the Model 2 compact Tesla.
Advertisement

After I bought my first electric car, I became interested in the future of EV technology. There was one company that was clearly further along that future path and the name of the company is Tesla. Like a lot of people, I wondered why Tesla did not make a more affordable car. After all, 45K is a big chunk of change and it’s much easier to sell high volumes of a product if everyone can afford it! Right?

It didn’t take me long to figure out why Tesla do not. Like all electric vehicle companies, the company was supply-constrained by batteries (although, Tesla seems to be free from battery constraints now). If you can sell every expensive car you make, there is no point leaving money on the table by making a cheap one. The battery supply constraint problem meant that business had no choice but to focus on the top-end of the market.

But thinking about the future, at some point, that constraint will go away.

Tesla’s recent battery day brought everything into focus. If the company could solve both the supply problem and reduce the cost of production, then it will be free to go after all parts of the market. I was interested what that mean in terms of an affordable city car. The sort of cars that sell in big numbers in Europe. The sort of car I would probably buy.

There are a lot of YouTubers covering Tesla, and I watched a video from a channel called “Dr. Know It All.” In one episode, the presenter had come up with a design for a Model 2. It was a sort of mini four-door Cyber truck, with the rear two passengers facing backwards and luggage space between the seats. I like the channel, but this idea was way too out of left-field.

Other people have been thinking about the compact Tesla Model 2 as well. On the web there are some really nice renderings. These tend to be very sleek with low roofline and look like sports cars. But sports cars have barely any carrying space. They look cool, but a mass market vehicle needs more practicality. Here is one of them.

We already know what an electric super-mini should look like. The Renault Zoe is Europe’s best selling electric vehicle. It is not perfect, but the basics are obviously sound. The Zoe formula is:

• A 5-door compact hatchback. With good interior volume for 4 adults and a decent amount of trunk-space.
• A 50 kwh battery pack offering around 240 miles of range.
• A higher driving position improving visibility and making room for the battery.

If Tesla could build such a car, it would be better than the Zoe in pretty much every metric. Faster, more nimble, with quicker charging, smarter electronics - and if the battery problem is solved, it would be cheaper too.

So I thought it would be fun to visualize what that would look like in a potential Tesla Model 2. I took two images, a Zoe and a Model Y, and used Affinity Photo to graft and warp the Tesla design language onto the Zoe body shape. When it started to look like a vehicle, I took the image in to Procreate on the iPad and painted in the gaps. And because this was literally amateur hour car design, I spent about an hour doing it.

I suspect the designers at Tesla Berlin (or wherever it gets done) will do a much better job. But that said, I would buy a car that looked like this.

In September 2020, Tesla announced an upcoming $25,000 electric car enabled by its new battery cell and coming within the next three years. Many people think it will be called the Model 2. The question is also what kind of car the Tesla Model 2 will be. ?Will it be close to the size of a Golf and what will the quality of the ride be and what will it have of tech? And will the Tesla Model 2 be able to drive autonomously which is a big advantage for many Tesla owners and enthusiasts?

Glyn Williams is a Tesla enthusiast and a game developer who has been publishing games since the 1980s. He is married with two adult children and a cat. You can follow Glyn's Tesla and Technology tweets at @Carniphage.

Reviewed by Armen Hareyan who is the founder and the Editor in Chief of Torque News. He founded TorqueNews.com in 2010, which since then has been publishing expert news and analysis about the automotive industry. He can be reached at Torque News Twitter, Facebok, Linkedin and Youtube.