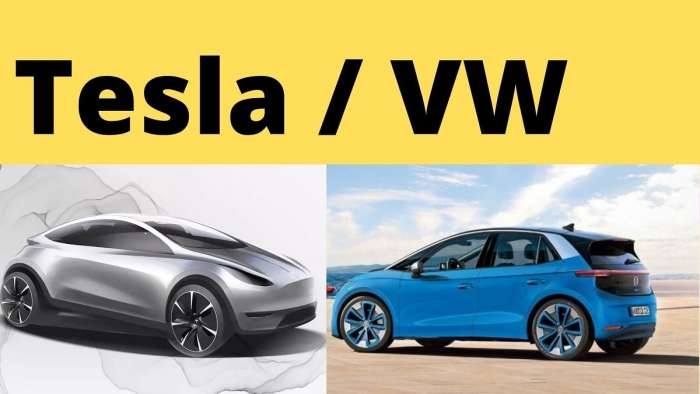 Volkswagen and Tesla are planning small electric cars. Both electric cars could hit the market in five years. Target prices are around 25,000 euros and the compact vehicles have a range of around 250 miles per single charge (400 kilometers).
Advertisement

Small electric cars are currently multiplying like rabbits. Honda E, Opel Corsa-e and Peugeot e-208 are already on the market, and the new Fiat 500 and Renault Twingo Electric will be launched shortly. The VW Group, on the other hand, is currently unable to deliver in the vehicle class: VW e-up , Skoda Citigo e iV and Seat Mii electric are sold out.

But behind the scenes, the successors of these vehicles are already being worked on. In the first half of 2025, when the Polo with a combustion engine can no longer meet the CO2 fleet targets, the new VW ID.1 is to be launched in Polo format. A good 20 centimeters shorter than the 4.26 meter long ID.3 - and significantly cheaper, EDISON learned in corporate circles.

The small four-door model uses a shortened MEB platform and has as much space inside as a Golf. Thanks to a battery with a capacity of 52 kilowatt hours, it should be able to power up to 400 kilometers. Practical: The battery is the same as in the base model of the ID.3 and with its seven modules fits exactly into the underbody of the ID.1. The starting price? Less than 25,000 euros. The production site is still open. It is certain that Skoda and Seat will receive sister models. And that about a year later an SUV version called ID.2, the size of the VW T-Cross, will hit the market. In fact, we believe VW could become an EV leader in 2022.

It goes without saying that the Californian e-pioneer Tesla also has a little compact car in mind. “It might make sense in Europe to build a small car, maybe a hatchback or something similar,” said Tesla boss Elon Musk these days at a battery conference organized by the German federal ministry of economy, in which he also said Tesla will build the world's largest EV battery factory at Giga Berlin. He had previously expressed himself similarly in a video that was filmed with Jay Leno during a trip in the revised Cybertruck.

Musk has been thinking about a car smaller the Model 3's size since 2018. In the meantime, he is specific: "We are sure that within three years we can build an irresistible electric car at a price of 25,000 dollars that can also drive fully autonomously."

Most important requirement? Exactly, dramatically cheaper batteries. In September, the “Battery Day” provided the missing piece of the puzzle: the new generation of 4680 battery cell with five times the energy density and six times the power. On top of that, it is more compact and cheaper. The cells should be available in 2024.

No question, this is very suitable for the start of Model 2.

This is really an exciting topic, Musk recently noted, and brought Germany into play for the design and vehicle development of the “Compact Vehicle:" “Probably a good idea.” An indirect reference to the large design center planned in Berlin, for which Tesla plans to employ up to 1,000 people in the medium term.

Tesla's compact Model 2 production could begin at the same time in the Giga Berlin (where production of the Model Y will start in spring) and in the Chinese plant in Shanghai. With a length of approximately 4.30 meters, the car will have the format of a VW Golf. And its battery, which, depending on the version could cover a range of 250 miles, will probably become a load-bearing part of the vehicle structure for reasons of cost and weight. The construction could allow Musk to offer the Model 2 in Europe at a price of less than 25,000 euros.