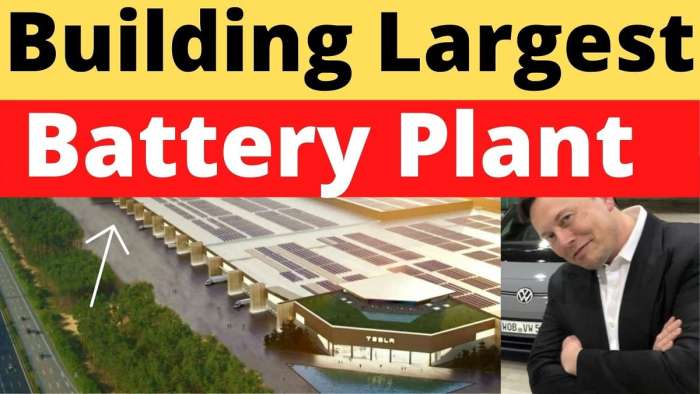 At the European Battery Conference, organized by the German government Elon Musk unveiled plans that Tesla will build the world's largest EV battery plant at Giga Berlin and a new special Tesla compact vehicle for the European market, designed by European engineers.
Advertisement

Elon has given a keynote talk at the European Battery Conference today. At this point Torque News doesn't know if he had to personally travel to Germany or gave the keynote talk remotely, but the plans which the Musk unveiled are very interesting.

Philipp Vetter and Daniel Zwick report in the Welt that in addition to car production, the world's largest battery factory is also to be built in Grünheide. Elon Musk also wants to develop a new model specifically for the European market. He justifies this with a personal experience in Berlin. But before I tell you about his personal experience in Berlin, let me first tell you about Tesla's new battery production plans at Giga Berlin.

Elon Musk has big plans for the Tesla factory in Brandenburg. According to this plan, Tesla plans to build the world's largest EV battery factory in Brandenburg with a capacity of around 100 gigawatt hours. Later on, production could even be expanded to 200 or 250 gigawatt hours, Musk said at the European Battery Conference organized by the German Federal Ministry of Economics.

The Tesla CEO also plans to develop a new model for the European market in Germany. He was thinking of a compact class car, which is particularly popular in Europe.

“There are talented designers and engineers in Europe, and the best people want to work there and be able to implement their own ideas, they don't just want to copy something that was designed in California,” said Musk. You also need a model that is adapted to the conditions in Europe.

"I was recently in Berlin with a Model X and we had a lot of problems finding a parking space that the car could fit in," said Musk. That's another reason he's thinking of a smaller compact model from Tesla.

The Welt reports that Musk is looking forward to the opportunities that will arise for Tesla in Europe. The European Gigafactory in Brandenburg is to play a role especially in the transfer of new battery technologies to large-scale production. Musk has already taken over two German machine builders who develop production systems for battery cells in particular.

"Many of the advanced production facilities come from Germany and Europe," said Musk. The aim is to significantly lower the price per kilowatt hour so that everyone can afford an electric car. To do this, the “machine that builds the machine” has to be improved by making production more efficient.

Musk also addressed Tesla Giga Berlin's opponents' concerns. The Tesla CEO emphasized that the people in Brandenburg do not have to worry about the battery factory. New methods are being developed that will mean that environmentally harmful production steps will be eliminated. "You can live right next to the battery factory and not have to worry about toxic substances," said Musk.

I think Tesla is on the right truck and moving ahead with a smart strategy for its future. If automakers don't take steps like this, they are going to be at the mercy of battery producers when they switch or increase their electric vehicle plans. Tesla, and some other automakers investing in their own battery production invest in their future and ensure at least one big headache is off their decision-making table.