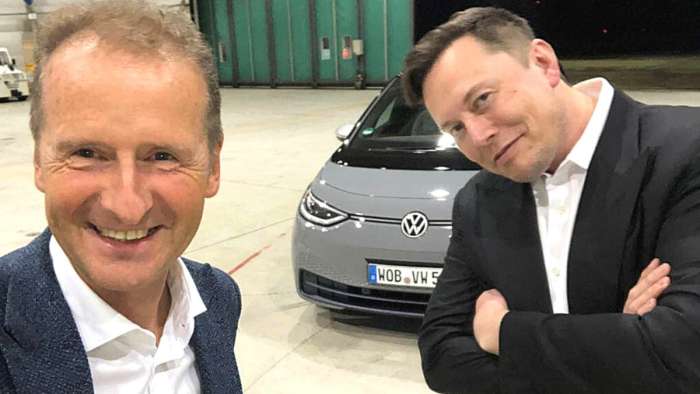 Herbert Diess on Elon Musk's ID.3 Test Drive: "No Deal in The Making"

Today Volkswagen shared the video of Tesla CEO Elon Musk's ID.3 test-drive with VW chairman Herbert Diess. Musk and Diess talk about ID.3's acceleration and the battery pack, but something much bigger is happening there. Here is the full transcript of their conversation. Just a few moments ago Herbert Diess wrote a comment under his post clarifying that it was just a test-drive and no cooperation or deal in the making.
Advertisement

Torque News reported last week that after leaving Giga Berlin on September 3, Tesla CEO Elon Musk stopped at Braunschweig airport at 9:45PM German time, met with VW Chairman Herbert Diess, and test-drove the ID.3. Let’s watch the video and talk about it. This morning Herbert Diess shared a short video showing Elon Musk and him test-driving the ID.3 in his LinkedIn, which Volkswagen also shared on Twitter.

No Deal or Cooperation Between Tesla and VW

As I was preparing this video and report, about 25 minutes ago Herbert Diess made a new comment clearing people's expectations from Tesla and VW possible future cooperation writing "Just to be clear: We just drove the ID.3 and had a chat - there is no deal/cooperation in the making."

And then we hear both laughing at a particular subject and Musk asking “what's the worst that could happen?”

Diess also wrote a special note thanking Elon Musk for the visit. Here is what he wrote.

Andrew H. a property manager writes, "Always good to keep a good relationship with innovators in the field. VW has a real shot at changing the automotive landscape with their ID line especially when costs are par with ICE cars. Hopefully there may be an alliance or collaboration in the future!" 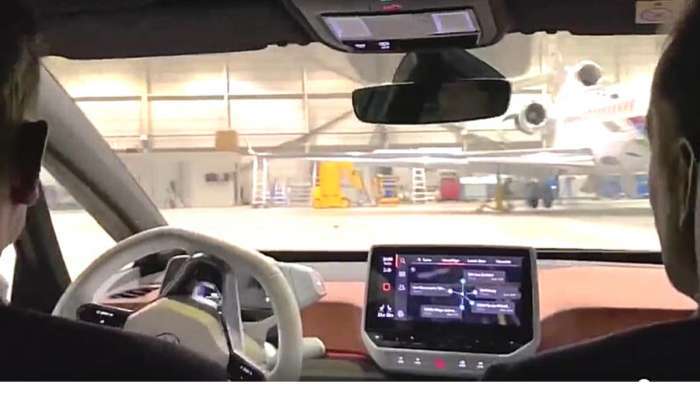 It would be awesome to see Tesla cooperating in full with Volkswagen. It would be pretty much as Apple joining Nokia, before Nokia’s incompetent and unethical management demolished it in less than two years from the launch of the iPhone.

Volkswagen did a pretty gentlemen action repairing the mess and lies regarding the diesel scandal, for what I see they are doing a very good job as continuation from that.

Tesla/Volkswagen could be a global revolution and win-win example to be followed (ad the consumers as winners on it too).

I love both brands and both CEOs have been inspiring. Capture the moment folks, glad to keep buying your environmentally sustainable products as individual sponsor.

It’s great to see a friendly cooperative approach between Tesla and Volkswagen leaders. Some of you may be Tesla funs, while others here may be Volkswagen funs, yet, it’s great to see Elon Musk test-driving the ID.3 electric vehicle made by Volkswagen and Volkswagen sharing it. I like the friendliness between the two. It sets a good example for many other leaders in this competition-driven world.

I give respect to these two people in this regard. Your businesses might be competing against each other, but on a personal level, you seem to be friends. I am very pleased to see that Diess and Musk have a good relationship. Regarding ID.3, in my opinion, the ID.3 does not need Model 3 acceleration if it is priced moderately.

Also, see our 3 reasons why Volkswagen could be an EV leader by 2022. Please, let me know your thoughts about this test-drive, the ID.3 and the future relationships of Tesla and Volkswagen.

Tsingshan's Threat to Tesla: EV Maker Is In Battery Crosshairs
Tesla-Funded Research Reveals One of The Biggest Mysteries of EV Battery
END_OF_DOCUMENT_TOKEN_TO_BE_REPLACED