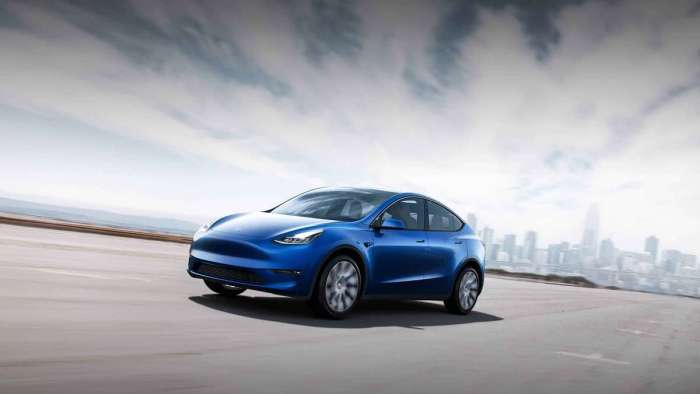 The Tesla Model Y is hitting its delivery stride. Here is a list of legacy big-name manufacturers whose crossovers don't stand a chance.
Advertisement

Tesla's Model Y launched earlier this year. Despite just having come to the American market, the Model Y is already kicking the butts of many well-established leaders in the premium crossover world. And more than a few crossovers in the mainstream sales segment as well. We thought it would be fun to examine which crossovers are being outsold by Tesla's Model Y. You may remember that we did a similar story a while back highlighting which entire automakers' fleets Tesla's Model 3 was outselling.

The new battery-electric crossover is smaller than the Model X minivan/crossover model, and nearly identical in many capacities to the top-selling Toyota RAV4. However, the Model Y has been designed to offer an optional third-row of seating. That makes it a bit of a tweener in terms of vehicle categories. Who cares? It's about the size of the RAV4 and Honda CR-V, the two top sellers in the largest automotive category in America. The Model Y doesn't outsell these modes (yet?). But the list of those manufacturers who don't have any crossover that sells as well is long and distinguished.

Before we begin, our data on vehicle deliveries is courtesy of Good Car Bad Car. Now that Inside EVs has quit tracking EV sales, we will rely on GCBC's data for our Tesla delivery estimates. Tesla doesn't offer by-model breakdowns of its sales in the U.S. market. So GCBC uses VIN reporting and DMV data to break out the info. GCBC says that Tesla has delivered an average of 11,500 Model Y crossovers each month for the past three and that it delivered 11,818 in September. Our comparison to other brands will be for September. We will list out each brand and comment on the sales. Note that many entire brands are outsold by the Model Y.

That is our list, again based on data provided by GCBC which you can view yourself at the site's listings of U.S.-market vehicle sales by Model.

It was easy to discount the success of Tesla's Model 3, which continues, by the way. We all know sedans are a dying segment and the Model 3 was the only obtainable performance electric vehicle. Now that the Model Y is eating at the very heart of most automakers' profits maybe it is time to read the writing on the wall. Shoppers want great green vehicles.

So which models still outsell the Model Y? The CR-V, Rogue, Forester, Escape, Outback, RAV4, and arguably the RAV4 Hybrid and Prime trims combined if you pull them out of the RAV4's total volume. Also, the Jeep Grand Cherokee (to our surprise).

Honda, Kia, Hyundai, Ford, Mitsubishi, and Volkswagen have all announced new crossovers the size of the Model Y for 2021 equipped with a plug. Only Toyota and Mitsubishi beat Tesla to market with green crossovers in the most popular size category.

DeanMcManis wrote on October 13, 2020 - 7:36pm Permalink
Yep, the Model Y is a big seller. And worldwide sales will climb dramatically next year as Giga Shanghai and Giga Berlin factories come on line with their Model Y production. Model Y sales should at least triple worldwide.