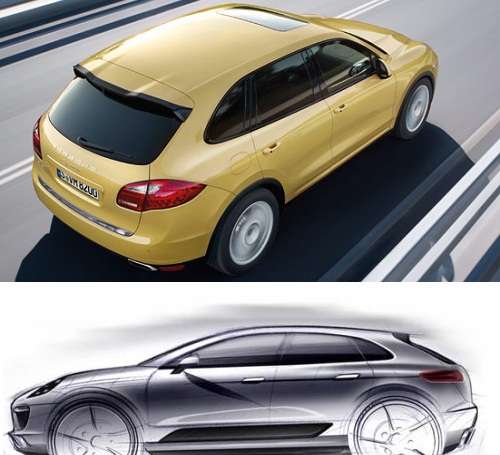 Porsche is planning to introduce the Macan for the 2014 model year. It will be the smallest SUV built by Porsche but in some ways it will be closer to its roots than the larger models.
Advertisement

Porsche, after all, is known for its sports car production. The company received a lot of criticism for widening its line with the four-door Panamera and the Cayenne SUV. But these models proved to be successful for Porsche as they broadened the customer base and even appealed to Porsche traditionalists who were seeking greater utility than the sports cars. Their success with the new models lies in their increased space, but also in the translation of the Porsche driving experience to the larger vehicles as well as their provocative design. So now comes the Macan.

The Macan will be a smaller SUV based off the Audi Q5 platform. This puts the size among the smaller of the SUVs, competitive to the Q5 but also the Volkswagen Tiguan, Range Rover Evoque, BMW X3, and Mercedes Benz GLK. Nobody will buy a small Porsche SUV for serious off-roading, so just who is the target market and how will the vehicle be used?

In the 1950’s, ‘60’s and into the ‘70s, moms with kids favored the old station wagons. Who can forget the fake contact paper “wood” on the sides of those smelly, gas-guzzling sleds? In the 1980’s and ‘90s, soccer moms moved to the ever-practical minivans pioneered first by Lee Iacocca at Chrysler. Minivans gave way to SUVs. Soccer moms loved their large Chevy Suburbans, GMC Yukon Denalis, Ford Expedition and Excursions, Cadillac Escalades, and in their most extreme form, the Hummer. And even dads liked these vehicles as they were comfortable, spacious, macho, and could handle the occasional off-road duty. But gas prices have largely killed this segment both economically and politically. So that paved the path for mid sized SUVs and crossovers. These vehicles have garnered the focus of manufacturers for their utility and relative fuel efficiency. But lately they have received more attention from automakers with more daring design and performance. People looking for more utility than sedans or sports cars but with performance and flair have flocked to this segment. The Porsche models fit into this category.

Not a lot is known about the Macan at this stage. Porsche has released a video teaser that shows active young men and women all engaged in outdoor activities, and even the obligatory soccer mom with two young boys. Expect the marketing and positioning for the vehicle to be lifestyle focused. It is doubtful that the Macan will be viewed as a serious utility vehicle. The Q5 is about eight inches shorter than the Cayenne so expect the Macan to be similarly reduced. The height likely will be three to four inches lower than the Cayenne and should sit lower to the ground. Front seats will be the focus with plentiful space and sport bolstering but the rear should be a kids-only domain with room for two and a half. Pity the half. Cargo space will be minimal with seats up but more utilitarian with seats down. But who seriously buys a Porsche to transport stuff?

The design sketches look like a raised and shortened version of the four-door Panamera. According to the sketches, the front and back ends are typically Porsche. The side views are dominated by ultra large wheels (likely to be right-sized for production), and a chopped greenhouse (likely to be raised for production). So the final design likely will look more like a baby Cayenne with a lower, shorter, and more raked profile.

Who will buy the Porsche Macan?

The target will be young people who need more than a sports car but can’t bear to move to a Ford Explorer or a Chevy Acacia and who can’t afford the Cayenne or a Range Rover. They would prefer to be driving a Cayman or Carrera but know they need space for the kids. With an expected price in the $45-50,000 range, this should limit buyers to active, wealthier 30-45 year old couples with young kids. How big is this market? Not huge, but it is a gap for Porsche and large enough to be worth spending a half a billion dollars to adapt a Q5. It’s something to look forward to.

Joseph De Leon wrote on March 18, 2012 - 1:22pm Permalink
I currently drive a bmw x5 4.8is and love it but am excited about the new macan, as I had considered the cayenne in the past but found the x5 better looking, with a better looking interior, and a better warranty. I know these suv's are marketed at soccer moms but there is a niche of others like myself that can no longer drive the 911 and other sports cars due to back pain or injuries, but still want the excitement of a sports car. I fall into a segment of the population that seems to be largely ignored but after meeting many others like myself I have found we also really fuel the suv market, so props to porsche for expanding their suv line up, ive enjoyed my bmw's but now look forward to admiring a porsche in my driveway.

Tsingshan's Threat to Tesla: EV Maker Is In Battery Crosshairs
Tesla-Funded Research Reveals One of The Biggest Mysteries of EV Battery
END_OF_DOCUMENT_TOKEN_TO_BE_REPLACED