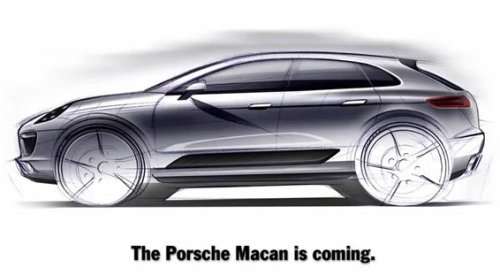 We have known (or at least expected) for some time that Porsche would be offering a sport utility vehicle smaller than their popular Cayenne and while we have commonly been referring to the upcoming compact sport ute as the Cajun; thanks to a new company video we know now that the new model will be called the Porsche Macan.
Advertisement

This morning, Porsche AG issued the minute long video shown below with a few scant glimpse at what we can assume is the interior of the new Porsche Macan but the only real look we are given at the new compact SUV is the drawing shown on the right (also showed at the end of the official company teaser video). The Macan is the newest piece of Porsche’s “Strategy 2018”, which is the Stuttgart-based automakers plan to expand their segment offerings throughout the global market by the year 2018.

“The Macan combines all sports car characteristics with the benefits of a SUV and is a genuine Porsche,” said Bernhard Maier, Executive Vice President Sales and Marketing of Porsche AG. “The name of a new Porsche has to fit with the brand, sound good in very many languages and dialects and evoke positive associations.”

Mr. Maier is right – the new Porsche Macan does have a nice ring to it and it will probably work well in a variety of global markets but I imagine that many of you reading this might be thinking…what does Macan mean? Well, the folks at Porsche were good enough to explain that Macan is the Indonesian word for tiger and that like a Tiger, the new Porsche Macan will combine “suppleness, power, fascination and dynamics”.

Unfortunately, while Porsche AG did explain what Macan means; they didn’t offer any information on the upcoming model shy of the drawing at the end of the video. From what we can see in that artist’s rendering of the compact sport ute, the new Porsche Macan has a low, sleek stance that portrays the current familial Porsche form very well. We can expect the Macan to be smaller all around than the Porsche Cayenne with slightly less cargo space and less room in the rear seating area but we can also likely expect a smaller price tag. The Porsche Cayenne starts at $48,200 for the 300 horsepower base model so depending on the available trimlines, we can expect the Porsche Macan to start somewhere south of that. This means that not only will Porsche be entering a new segment but with a lower price than the Cayenne, the affordability of the Macan could help attract new buyers to the brand.

The Porsche Macan will be built at the company’s plant in Leipzig, Germany starting in 2013 and to prepare for the production of the new compact SUV, Porsche will be expanding the Leipzig factory with an investment of $650 million US dollars (500 million Euros). This will include adding a full body assembly line and paint shop – making for one of the biggest building projects in the automaker’s storied history. This expansion will also create more than 1,000 new jobs in Leipzig.

Panasonic Updates Profit Forecast, Noting How Much Tesla Batteries Help The Jump
2022 Porsche 911 GT3 Laps Nurburgring in 7:04 With Journalist Behind The Wheel
END_OF_DOCUMENT_TOKEN_TO_BE_REPLACED