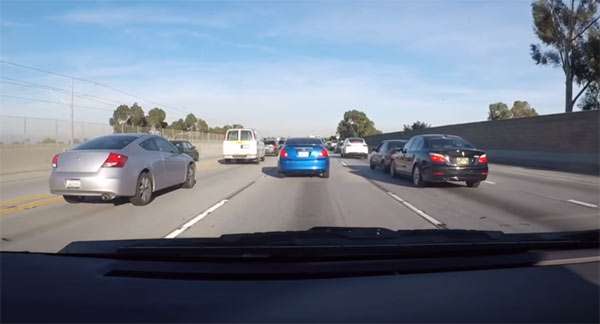 The instant torque that you get from an electric vehicle is one of the draws for many owners, but now it seems that it can also possibly save you in repair costs. Having instant torque at your disposal can be useful in many situations, such as overtaking and in this situation quick wits and instant torque saved a rear end collision.

In this situation, Maaz Jilani the driver of the model X who had autopilot disengaged, had an SUV two vehicles back get rear-ended and just before he was about to suffer the same fate manages to quickly accelerate forward. The footage you see is from another vehicle's dash cam.

As the autopilot was disengaged, the avoidance of the accident was done with quick reactions and instant torque of the Model X. This means that Maaz Jilani definitely had his wits about him at that moment, rather than having his tunes on full blast than daydreaming out of the window. Also, after watching the footage a few times, the BMW doesn't slow down after the impact but carries on at the same speed he was rear ended. Another nod to how quick Jilani and his Model X got out of trouble.

At this point it would be interesting to hypothesis what would have happened if a gasoline powered vehicle was in the place of the Model X and if it could have got out of the way as quickly. Possibly, maybe but at least in this case, instant electric torque seems to won the day.

Only last November, a Model S owner Jason Hughes saved his car from a Prius driver almost rear ending his vehicle, again with quick acceleration managed to get himself out of trouble as you can see in the video below. When autopilot features eventually become commonplace across all EV vehicles, it's expected that more videos like these will start to emerge, proving the point that safety can be increased simply by using electric motors.