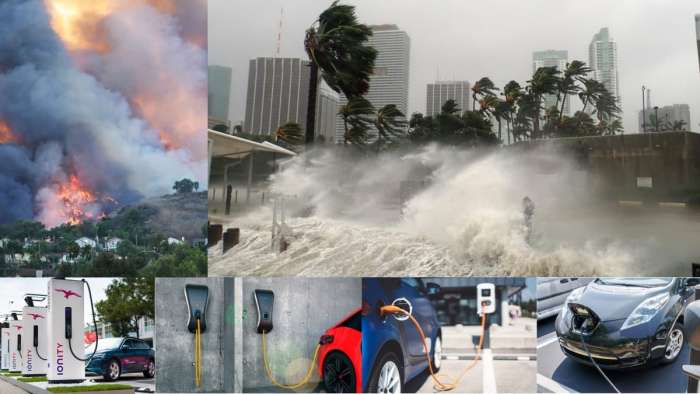 Electric Vehicles In An Emergency

In 2017, the unique weather conditions over the Atlantic parented a great many storms, including Hurricane Harvey, one of the costliest storms that has ever occurred. Harvey wracked up more than 120 billion dollars in damage. Many people lost their lives to this devastating storm and many more lost their homes and vehicles to the flooding. If you must pack up and leave town to avoid a disaster, can your EV get you safe?
Advertisement

In 2017, no one in my family had an electric car. We mostly live on the East coast, and when a storm comes, we make an educated decision on whether or not to leave based on how the storm has affected other areas prior to us. Usually, storms don’t just pop up as really terrible over-night, so there’s at least a day’s warning to get out of Dodge so to speak. When hurricane Harvey rolled through in 2017, the state of Florida practically shut down, anticipating another instance of massive flooding and power outages as they had just seen from Matthew the previous year. I’d guess that everyone in Florida was on their toes as the last year had seen many people without power for days, if not weeks. I mention that no one had an electric car, because my family in Daytona did decide to evacuate for the 2-3 days that we were still worried that Harvey might harm Florida. They packed up their dogs and cat into their Subaru Impreza and bustled off. It took them an hour or so to get packed, and then another 6 or 7 hours to get to where they felt safe; about 300 Miles away. 300 miles is a good range for a fully electric vehicle that’s been fully charged. It’s a good range on a full gas tank. 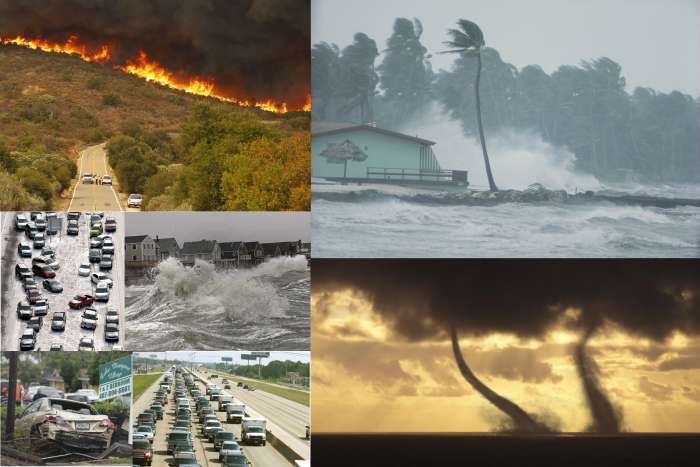 When my family had to leave Daytona, they didn’t have a full gas tank. They had to stop to get gas along the way. It took them a total of about 10 minutes to fill up and use the restroom, and by the time they were done in the potty, the car was ready to drive the full 300 miles. Now that my husband drives the Ford Fusion Energi Hybrid, plugging in is something that we think about. We look up charging stations along our routes for long drives and we try to keep plugged in when we stop, only using gas if we have to, but we still run out of juice occasionally and need to stop for gas. At least with the Fusion, stopping for gas is still convenient. I cannot imagine having to wait for my car to charge to be full enough to get me to safety.

Even the fastest charging EVs still take around an hour to get 200 or so miles worth of charge from the fastest, most expensive chargers. Hurricanes will wait an hour for you, for the most part. Living on the West coast, in places where wildfires are particularly common, EVs might make flight even more precarious as the fires can cover vast swathes of land quickly. At least having a hybrid feature, vehicles like the Jeep Wrangler 4xe, the Ford Fusion Energi, or the BMW i8 keep themselves more flexible for emergency use.'

One of the biggest boons of the Internal Combustion Engine is the fluid state of its energy source. Gasses and Liquids can be more easily transported and typically more safely transferred than can large amounts of electricity. Hydrogen ICE detractors feel that Hydrogen is simply too expensive to create and store and I can’t entirely fault them for that belief. Hydrolysis, or the splitting of water, requires energy to break the bonds between the Hydrogen and Oxygen atoms that compose a molecule of water. This simple fact must be dealt with and I’d like to propose an alternative solution to this alternative solution: Bacteria.

Before I started writing about cars, my profession was that of Pharmacy Technician. It was my job to read up on advances in the Pharmaceutical industry like the use of genetically engineered bacteria to produce human bio-equivalent hormones. Hormones are complex chemicals that are found within our bodies and consist of many carbon, nitrogen, hydrogen, and oxygen atoms (as well as a few other trace elements) that are all folded up in a unique way to provide a certain function to the body. With hormones being so complex, and the compounds that make up Gasoline or even simpler, Hydrogen Gas, being so much simpler, it should be child’s play to engineer a bacterium to generate a renewable fuel source. At least one lab has managed to make a species that emits propane and there’s hope that other hydrocarbons are possible as well.

Let’s not forget that another single celled organism, yeast, produces another fuel source; namely ethanol (or booze). Some folks are worried that mono-cropping to produce ethanol would be ruinous compared to the strip mining to produce lithium for batteries and I’d like to point out that Alcohol can be made from pretty much any substance that has sugars. It doesn’t have to be mono-cropping. It could literally be food waste that’s being used to create the fuel for the future. This self-same food waste that would make the alcohol could probably be the source of material for the various bacterial strains we may see arise to produce these fuel sources.

Electric Vehicles are the future that most of humanity has seemingly chosen for itself as the most viable moving forward. The charge time for EVs has gone from a work shift to a lunch break and that’s greatly impressive. That engineers have managed to create a safe means of unloading so much power so quickly is awe inspiring and I applaud them. I would still like to see them either charge faster or have an emergency generator onboard, simply for safety’s sake. It is infinitely easier to walk to a gas station for an emergency gallon or two than it is to push a heavy vehicle back to a charging or gas station.

As an Eagle Scout, I pride myself on preparedness. I keep a first aid kit in my trunk for everything up to a gunshot wound and I keep jump cables and a 1 gallon gas can for in case I don’t make it to a station in time. Even though I have AAA, I don’t want to be caught out in the Florida heat without power. I don’t see how that would be possible in a fully electric vehicle. I also worry that were another hurricane Matthew to roll through, if I only had a plug as my source of vehicular power, I might be stuck at home for even longer than I had been when the lights were out for a week. I might not have been able to get food and supplies or to go to work had I not had a gas-powered vehicle.