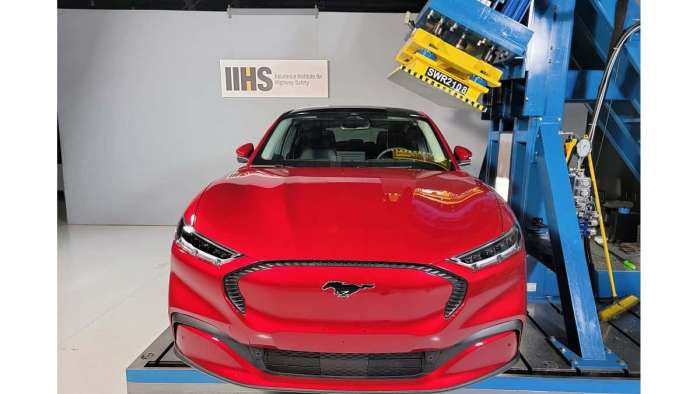 The Ford Mustang Mach-E is currently undergoing safety testing by the country's top auto safety agency. How will the Mustang Mach-E perform, and will it beat Tesla's Model Y to the podium?
Advertisement

The Ford Mustang Mach-E is presently undergoing testing by America’s most respected automotive safety testing agency, the Insurance Institute For Highway Safety (IIHS). The agency has already started to post teaser images, like the one above of the Mustang Mach-E’s roof crush test, on its social media feeds. Although the very similar Tesla Model Y beat the Mustang Mach-E to market by about nine months, it looks likely that the Mustang Mach-E’s ratings will be available before the Tesla Model Y’s. For background on why Tesla’s top-selling vehicle was not tested sooner, check out our focus story, Top-Selling Tesla Model Y Crossover Not Scheduled For Safety Testing By IIHS.

Why Does IIHS Testing Matter?
IIHS testing is more comprehensive than any other agency that rates cars for safety in North America. It conducts its crash tests at higher speeds, from more severe angles, and includes more detailed ratings on such things as active safety and headlights than any other agency. Many automotive safety experts consider the IIHS ratings the “varsity” and other ratings “junior varsity.”

Automakers and IIHS - Cooperation vs. Conflict
Like nearly every manufacturer, Ford works closely and cooperatively with IIHS, by contrast to Tesla whose relationship could be called “strained.” Tesla’s less than friendly past dealings with IIHS began when the Tesla Model S, marketed by Tesla as the "safest car in the world," failed - twice - to earn the same safety rating that a Toyota Camry or Honda Accord could easily earn. The Tesla Model 3 has since done well in IIHS testing, something Tesla seems proud if of you consider its social media feeds referencing the positive results. 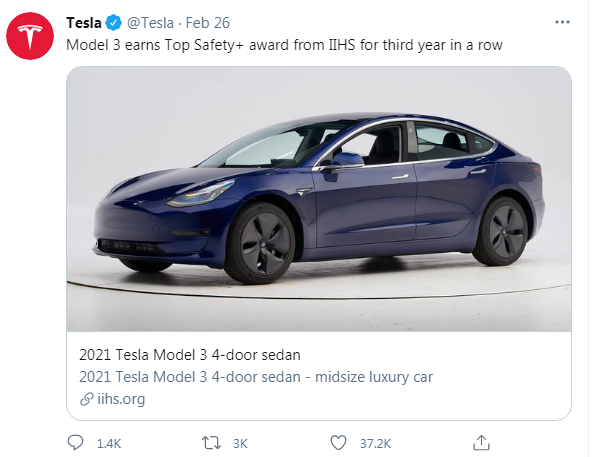 Ford's IIHS Scores Are Mixed
Ford’s Edge crossover and Escape crossover, both similar in size to the Mustang Mach-E, have both earned the second-best rating from IIHS, the Top Safety Pick. They cannot earn the Top Safety Pick Plus rating, the industry’s highest, because their standard headlights are not up to snuff. The Ford Mustang coupe does not earn any IIHS awards because it does not score “Good” on every crash test performed. So there is no guarantee that the newly-designed Mustang Mach-E will earn the Top Safety Pick Plus rating sought after by automakers and family car shoppers.

What’s your prediction? Will the Mustang Mach-E earn the TSP+ rating, or a score somewhat lower?

Jimmy Dinsmore wrote on March 25, 2021 - 10:00am Permalink
I'm interested in how the front crash will do without an engine to absorb impact. The old rear engine vehicles notoriously did horrible, so not sure how the Frunk will absorb a major hit.